Noah Ready-Campbell built his career in Silicon Valley. But his latest endeavor, a robotics company focused on autonomous construction equipment, represents a return to his roots and the hope that he can blaze a trail forward for the industry.

Before he started his career with a job a Google, and before he sold a $23-million online consignment shop business to eBay in 2015, Ready-Campbell worked most summers for his father, a contractor in New England.

“I did roofing and grading. I was a carpenter’s assistant, that kind of stuff,” Ready-Campbell recalls. “I grew up on it.”

So when thinking about what he wanted to pursue next, Ready-Campbell remembered all those summers in the dirt. “It’s a really cool feeling to build the community and leave your mark on the world,” he says. “It’s satisfying but it’s also fundamental.”

But apart from the appeal of returning to an industry that has what he called a “tangible” impact, Ready-Campbell believed he could use his skills to address two of the industry’s biggest pain points.

What it can do

Built Robotics’ first solution to construction’s lagging productivity and shortage of skilled labor is the Autonomous Track Loader (ATL), a compact track loader outfitted with LiDAR and machine control sensors that allow the machine to work without an operator. This robotic CTL has been designed for light construction like single-family homes and townhouses.

Ready-Campbell says the ATL, which is still in development, will be able to perform “the bulk of the work” on these types of projects: excavation, grading, pad prep, compaction, etc.

The LiDAR is the primary component to the ATL’s autonomy as it serves as the machine’s eyes by mapping the jobsite environment around it. The machine is also equipped with GPS sensors that not only assist in navigation of the jobsite but also allow it to perform precise work based on job plans.

“You can give this machine a high level plan of what you want to do…and then the machine figures out what it needs to do and then it goes and does that without an operator in the cab,” Ready-Campbell says.

And while a CTL seems an odd choice of machine for building an autonomous excavation and grading platform on top of, Ready-Campbell says the machine’s versatility made it the perfect fit for the project.

“They’re the most common pieces of equipment on jobsites today. There’s a big installed base of people with these machines and maybe they want to get some more mileage out of them,” he explains. You typically wouldn’t use them for excavation but we like it because it’s a very versatile machine and a lot of that is owed to the attachments. You can get an attachment for everything.”

Ready-Campbell says Built plans on expanding the autonomous platform to other machine types in the future.

While the auto industry has a considerable head start over construction when it comes to autonomy, Ready-Campbell says a big reason he founded Built Robotics was his belief that automation could be implemented on construction sites faster than it can be on highways.

“People aren’t going to trust self-driving cars until they can be safe 99.9999 percent of the time. It needs to be better than a human before it can be on the roads,” he says. “Cars also have to react very quickly. It needs to be able to react in such a way that it adapts to its environment.

“Jobsites are a more controlled environment, the machines are moving much more slowly and you can always stop the machine if you need to.”

Ready-Campbell says the Built platform uses geofences to keep the ATL from wandering away from its task. The ATL is also equipped with a wireless kill switch to quickly turn the machine off in an emergency. Plus, Built’s setup keeps the controls of the machine active, allowing operators to hop in the cab and take over at a moment’s notice.

“Our goal is to make construction safer, faster and more affordable. The speed and affordability are major factors here. Labor productivity for construction per dollar has fallen by 50 percent since the 1960s,” Ready-Campbell says, noting that other major industries have seen growth in that same time. “The reason for that I think is that wages have gone up to keep up with the cost of living and we’re not doing things in the construction industry in a better way than we used to.

“Something has to change. In order for the economy to keep getting better and the standard of living to keep going up we have to innovate.”

Early industry reception has been positive

And since he grew up so close to the industry, Ready-Campbell knows there’s plenty of folks in it with a healthy amount of skepticism for machine autonomy. And while he won’t be able to convince every operator that the technology is safe or that it won’t put them out of work,  he says operators that have seen the ATL in action understand and appreciate its purpose.

“Most folks in construction are not skeptical of tech, but they are very practical. If they have a problem and you come up with a solution for it, they’re usually pretty receptive to it. So the people that have seen this machine work don’t think it is coming to steal their jobs. They understand that it’s coming to take on the junior level type work,” he says. “There’s always stuff on the job that you can’t anticipate and I think that’s the role moving forward for the experienced operator. There are so many parts of an operator’s job that are monotonous or that are dangerous and those are jobs that a machine should be doing on it’s own quite frankly.”

Ready-Campbell says that machine operators have been a major part of the ATL’s development. He says the goal is to build as much operator-like instinct into the ATL’s code as is possible.

“We’ve done a lot of interviews and we’ve talked to a lot of expert operators and they teach us what they look for. We really try to talk to people and get some intuition around how operators do what they do and we distill that down to what code goes into the software,” he says. And though the ATL is a way off from coming to market, Ready-Campbell says the machine already does a pretty good job of blending in on the jobsite.

“It’s actually very much like watching a human operator. We have had contractors come by and say that if they didn’t know no one was in that machine they would think an operator was inside it.”

In the recovery from the recession, many contractors found themselves with hefty backlogs. However, due to a shortage of available skilled workers, contractors around the U.S. are still struggling to meet demand and many of them have actually had to decline work because of it. Ready-Campbell sees equipment automation as a way to relive that burden.

“We’re based in the San Francisco Bay Area and the labor shortage here is among the worst in the country. One contractor here that we’ve been working with has more work than he can fulfill,” Ready-Campbell says. “If we can help make the process of building a little more efficient you’re actually going to see more construction overall in the U.S. You might see fewer guys running skid steers on the jobsite, but you’re going to have a lot more people involved in construction in some capacity.” 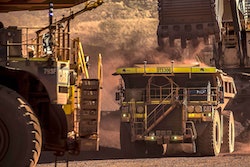