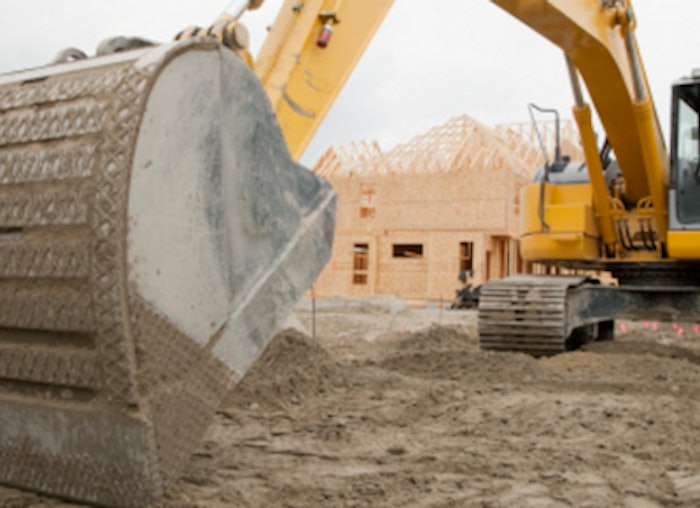 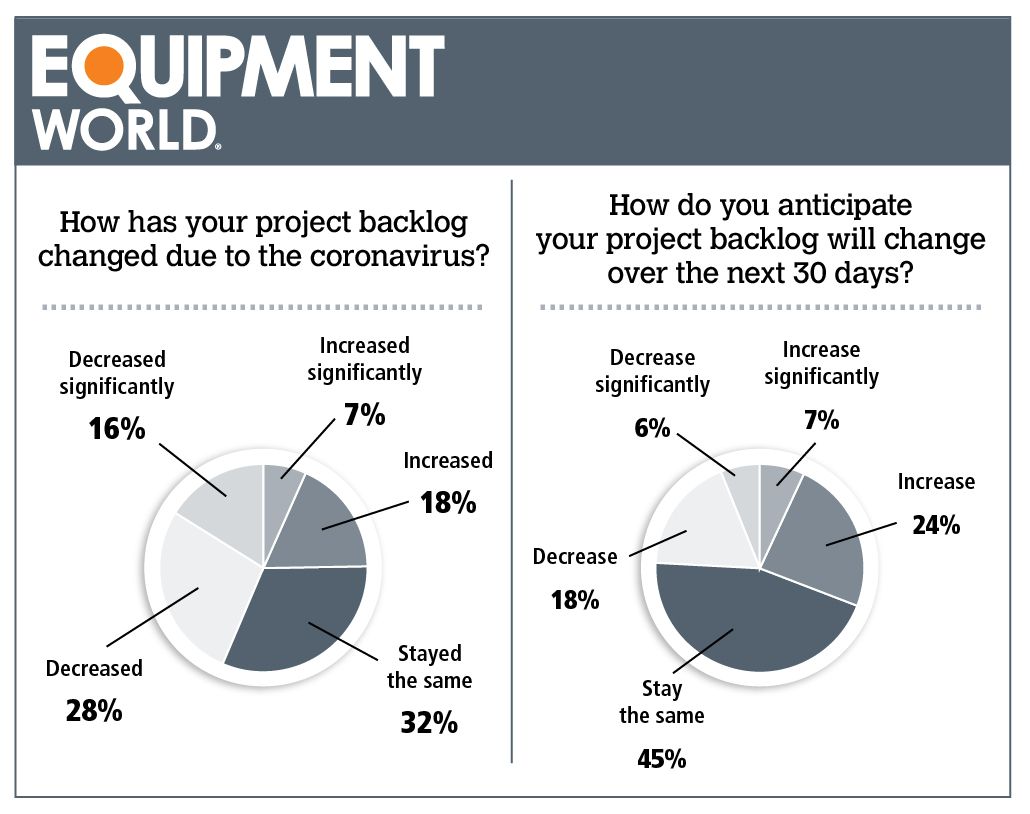 When looking at how project backlogs will change in the next 30 days, fewer contractors say they are expecting a decrease, according to Week 5 of Equipment World ‘s survey of contractor sentiment about the coronavirus impact.

And in Week 5, 45 percent of respondents said backlogs would stay the same in the coming 30 days, compared with 37 percent in Weeks 1-4.

Contractors in Iowa and Michigan noted they had seen backlogs unaffected to date or only slightly decreased. A Minnesota site prep contractor said “people are at home and want to get projects done.”

A Georgia specialty contractor commented, “Our estimating has actually increased but we are seeing competitors bid stupidly low numbers.” And this from another Georgia contractor who does excavating work: “We were bidding plenty of jobs the past few weeks.”

Others are far from optimistic, however. “Clients are cutting back capital spending plans. We went from going 110 mph to 45 mph,” said a Nevada commercial building contractor. Noting that he had hotel and casino clients, he said he was worried “that we may not get paid on the billings we have out there and may go through another wave of bankruptcies like the Great Recession.”

And a New Mexico utility contractor said, “We are working off backlog, but very few projects are out for bid. With work getting scarce prices will be dropping as contractors do anything to keep people working.”

(This survey, which had 120 respondents, is the fifth in a series of surveys that Equipment World and other Randall-Reilly brands are conducting each week to gauge market sentiment. To participate in the next survey, go here.) 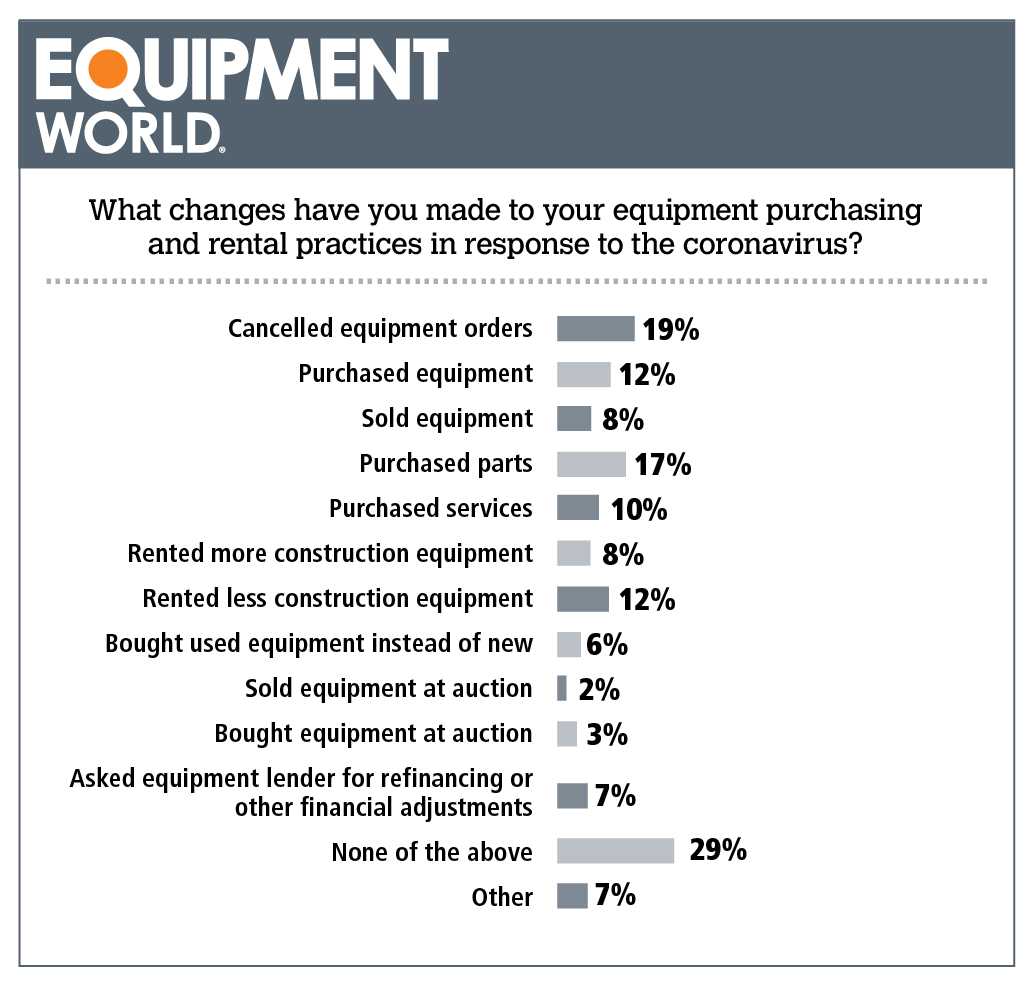 Asked about changes they’ve made in response to the pandemic, respondents in Week 5 generally followed the pattern set in the first four weeks of the survey.

There was a five percentage point jump from Week 4 to Week 5 (5 percent to 10 percent) in those who said they had purchased equipment services, a question we first started asking in Week 4.

Said a New Jersey commercial builder: “I’ve spent a lot of the downtime maintaining our equipment, which has precipitated parts purchases.” A Ohio specialty contractor said: “We’re doing some repairs that can help later when we’re at full steam ahead.”

“I just delayed equipment orders with the hope I can get them later this spring or summer,” said an Iowa utility contractor. And this from a Louisiana roadbuilding contractor: “We’ve reevaluated capital budgets, and will only purchase essential needed equipment and review equipment disposal.” 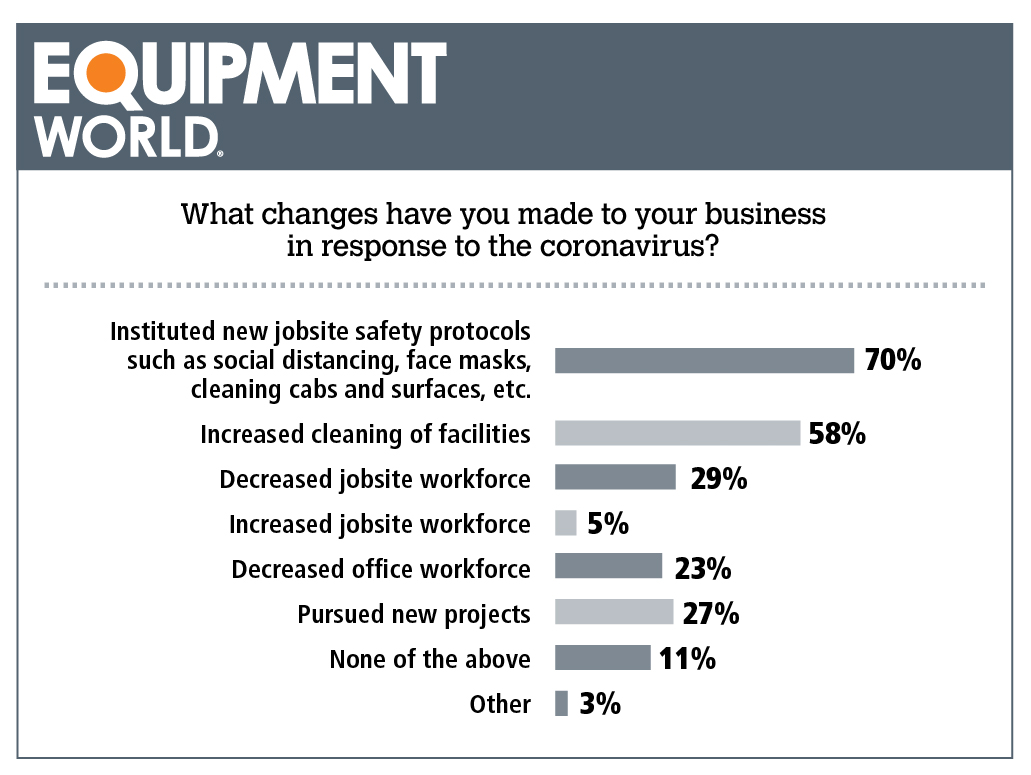 This week we added a new selection, asking whether respondents had instituted new job site safety protocols such as social distancing, face masks, cleaning cabs and surfaces, etc. Seventy percent of respondents said they had done so.

“It may be that COVID-19 is the new reality, so we’re looking at all jobsite and office practices for improved personal protection,” said a Nevada commercial building contractor. “Better practices and cleaning and better restroom facilities may make worksites more attractive to workers, improving worker retention and attracting more workers to a better-looking industry.” 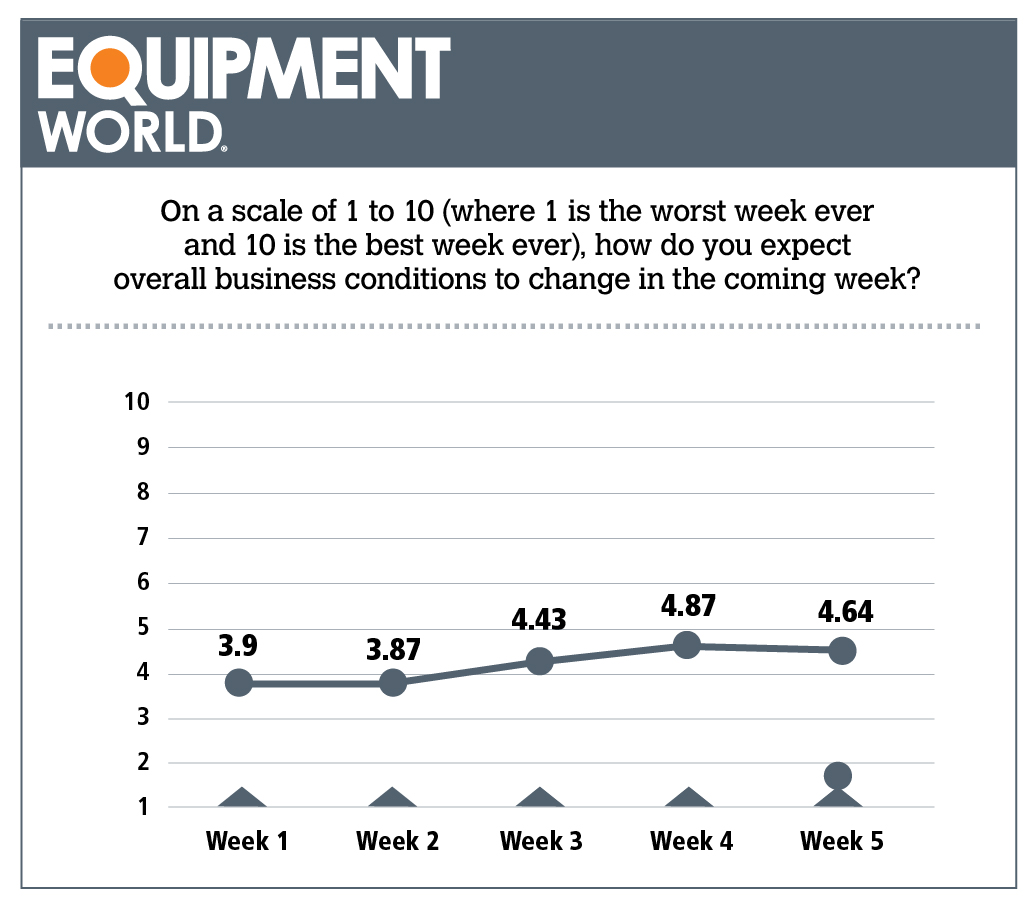 Finally, after seeing overall respondent sentiment inch up last week, the average fell this week in response to our question, “On a scale of 1 to 10 (where 1 is the worst week ever and 10 is the best week ever), how do you expect overall business conditions to change in the coming week?”