Mastering the unique challenge of spec’ing a compact excavator 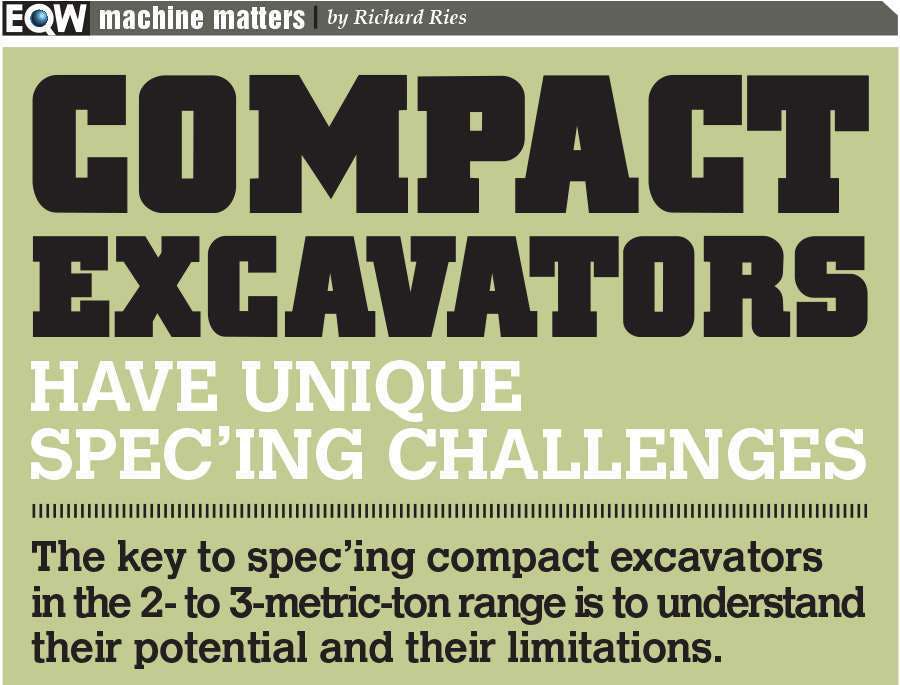 In the “what they aren’t” category, Randy Hall of Kobelco explains that “because these aren’t production machines, the specs that apply to larger machines don’t always apply here.” He cited swing speed, bucket capacity, dig depth and breakout force as examples. Yet others placed dig depth and breakout force on their list of top priorities. Hall notes that most of the digging done by compact excavators is done at far less than their maximum dig depth, often as little as half that depth. And “breakout force still matters in this size class, but less than on larger machines. It must still be sufficient for the intended applications but may not be enough for working frozen ground.” 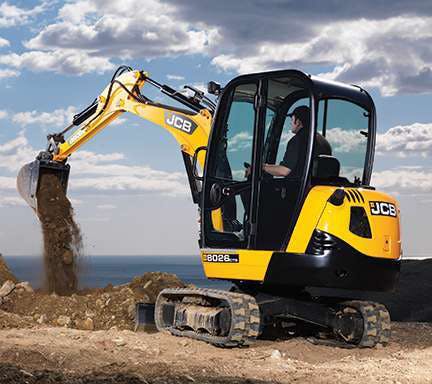 New to North America this year is JCB’s 8026 CTS, which has a maximum dig depth of just under 9.2 feet.

Both designs have advantages and limitations. Nominal overhang, also called traditional overhang or compact radius, retains balance at greater reach and dig depth and allows a higher lift capacity. The longer body also provides more space, which makes more room for the operator and improves access to service points. But the overhang limits maneuverability and creates a risk of property damage during operation if the body strikes a structure. Zero tail swing (ZTS) performance is the exact opposite: reduced reach, reduced dig depth, more cramped operator space and more restrictive access to service, but greater maneuverability.

ZTS machines can be equipped with counterweights to provide the balance of a nominal overhang machine, but then you’ve lost the advantages of the ZTS design. And unless the front of the machine is also changed out, the reach and dig depth are no greater than they were before the counterweight was attached. Some manufacturers address this by offering a package of complementary components. Deere, for example, offers a long-arm package for their 27D that includes a counterweight.

The characteristics of both styles of machine are well-defined and consistent from one brand to another. The key is for contractors to have a solid understanding of how they’ll use their compact excavator and choose the one that works best for them. And Adam Purcell, product manager for excavators and dumpers with Wacker Neuson, says “while the discussion of zero versus conventional tail swing is heavily influenced by application, material and soil conditions, in many cases it comes down to personal preference.” 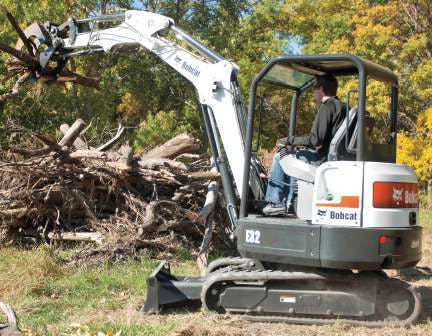 All sources agreed that auxiliary hydraulic performance is key to overall machine performance. Keith Rohrbacker, product manager for construction equipment with Kubota, says that 95 percent of their compact excavators go out with quick couplers and 75 percent go out with thumbs. Matthew Hendry, excavator product consultant at John Deere and Hitachi, says sophisticated hydraulics and a wide range of attachments turn compact excavators into versatile machines where “the operator is limited only by his imagination.”

While flow is critical, distribution of the flow is just as important. New Holland is among the manufacturers who have updated their hydraulic systems to reflect this design philosophy. “Our three-pump ‘smart’ system has one pump each for the boom and arm, the dozer blade and the travel circuit,” says Paul Wade, brand marketing manager with New Holland. “They all operate independently so the actuation of one doesn’t affect the others.”

Protecting hydraulic components is important. Jamie Wright, product manager for Terex, says, “Design features on Terex compact excavators ensure long component life. Top-mounted boom cylinders provide excellent cylinder damage protection. These cylinders are inverse mounted so the seal is facing down to prevent dirt build-up and give protection from the elements. The use of spherical bearings ensures the energy from torsional movement of the boom is not transferred to the cylinder, resulting in a strain-free cylinder run. Replaceable tin-bronze bushings with precisely designed hole patterns in the boom bearing points store lubricating grease to provide uniform coverage. And Terex’s cushioned cylinders are end-position damped to extend service life while minimizing inertia forces and reducing cylinder shock.”

Because hydraulic systems have evolved to take center stage in performance, “overall there’s less emphasis on horsepower than there was 10 years ago,” says Tom Connor, compact excavator product specialist with Bobcat. “More sophisticated hydraulics provide comparable or even superior performance from less horsepower, with lower fuel consumption, and customers know that. Horsepower is not the indicator of performance it once was.” 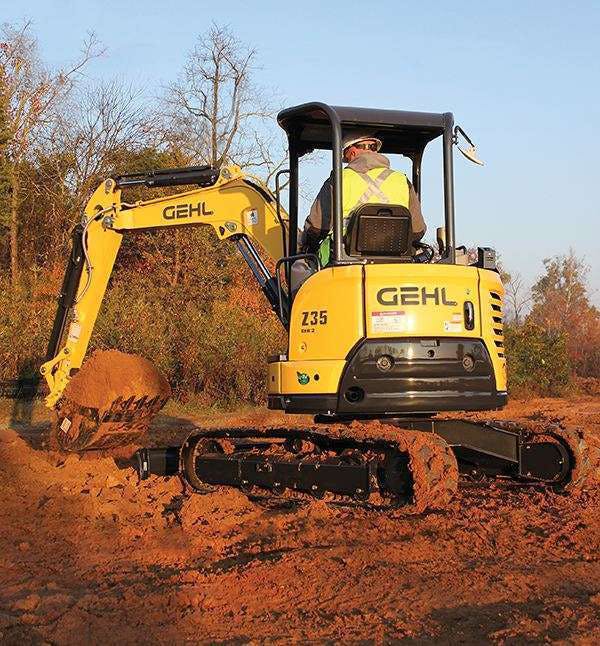 The Gehl Z35 Gen:2 offers an additional 2 inches of reach at ground level than its predecessor.

Only the smallest of compact excavators will fit through a standard 36-inch garden gate. Examples include Bobcat’s 1.1-metric-ton 418ZTS at 28 inches and Kubota’s 1-metric-ton K008-3 at 34 inches wide. But none of the nearly two dozen machines in the 2- to 3-metric-ton category listed in the 2013 Equipment World Spec Guide is narrow enough to make it through a 36-inch gate. Retractable tracks, which provide both a narrow stance during travel and a wide stance during operation, are found on some smaller excavators but are uncommon in this size class. Yet compact size and maneuverability remain important.

“Machine width in this class can vary as much as 6 inches,” says David Steger, product manager at Takeuchi. “That’s an 11 percent variation given an average width of 54 inches. Why such a large range? “Some manufacturers widen the undercarriage for better over-the-side stability, especially with a minimal or zero tail swing design,” says Steger.

Part of the size consideration is machine weight. Customers usually want a machine they can transport with their existing trucks and trailers.

Boom swing adds greatly to a machines maneuverability, says Shane Sirmons, business development manager with Hyundai. “The amount of swing isn’t as important as the fact that the machine has it. Some manufacturers offer it as an option; some not at all.”

Katie Pullen, brand marketing manager for Case Construction Equipment, agrees. “The ability to offset the boom allows for digging or attachment use immediately next to buildings, fences, trees and other obstacles. This is invaluable in residential construction and utility applications where work is often being performed around existing structures.”

With a high ratio of breakout force to machine weight, compact excavators can feel tippy at times. This is why Sirmons adds a dozer blade to his list of important specs. “Operators generally prefer to backfill with the bucket, not the blade, so the blade may seem unimportant. But the blade provides needed stability.”

JCB sought to improve stability by lowering their machines’ center of gravity. They did this by dropping the rotary coupling, a design cue borrowed from their larger excavators. “This is especially helpful with compact machines,” says Vincent Whelan, product sales manager for compact excavators at JCB. “Compared to operators of full-size excavators used in production applications, operators of compact machines may be less experienced and made more uneasy by the sense of instability.”

While large excavators offer near-living-room space for operators, smaller machines have tight confines. And because customers can be price sensitive, some OEMs delete comfort features on certain machines in order to hit a lower price point. But maintaining productivity and safety through operator comfort is important. “There’s the specifications side of choosing a machine,” says Connor, “and then there’s the amenities side.”

Wade, of New Holland, cites some of the key components of comfort. “Can the operator get in and out easily without a lot of side-stepping? Is there sufficient leg room? Does the seat adjust back-and-forth? Do the armrests adjust up-and-down?” Purcell notes that the new Wacker Neuson ET20 compact excavator features double doors on the cab to allow access from either side of the machine.

Configurable controls contribute to operator comfort and efficiency. Compact excavators from JCB can be spec’ed with joystick or foot pedals controls; Whelan notes there is a continuing migration toward joysticks. The ability to switch between ISO and SAE control patterns (also called Deere/Cat and backhoe/excavator patterns) is popular. Purcell says operator preference falls close to a 50/50 split.

There were a number of features that some OEMs thought were important that didn’t fit into any of the main categories. Hendry points out that Deere uses an integrated wedge-style coupler to provide quick change-outs while leaving breakout force unaffected. Some other couplers change the geometry of the bucket and the stick, creating significant decreases in breakout force.

Hall, of Kobelco, adds dozer blade range of motion to the list. Both the above-ground lift and the below-ground level should be considered.

Because compact excavators are often used in and around finished areas, ground pressure can be important. Rohrbacker points to the low 3.32 psi ground pressure of Kubota’s U25S and 3.9 psi of their KX-713S as key specs in some applications. Wide tracks reduce ground pressure but can accelerate undercarriage wear when operating on uneven ground.

Rubber tracks are usually standard equipment on compact excavators with steel tracks available as options. “There are advantages to both steel and rubber tracks based on operating environment,” says Pullen. “Rubber tracks limit damages to finished surfaces while steel tracks provide better grip and traction.” Steel tracks are preferred for use in demolition and on rocky ground.

A unique feature of the Wacker Neuson 28Z3 is the Vertical Digging System (VDS). The upper structure tilts up to 15 degrees to compensate for up to 27 degrees of slope so the machine still digs vertical walls even when it’s sitting on a sideslope. This saves up to 25 percent in time and material compared to digging without VDS and significantly improves operator comfort. At full tilt the EZ28 retains full swivel power. 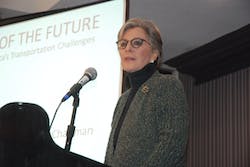 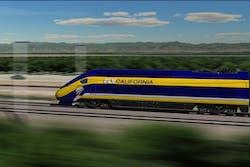