Growing up, John Gilbert III never considered a career other than construction. Exposed to the family business at an early age, John spent his summers on jobsites doing anything and everything – pipe work, surveying and serving as a concrete foreman. After graduating from the University of North Carolina-Chapel Hill with a liberal arts degree, John worked for several large construction firms to get more experience. “I worked for a geotechnical engineering firm in Atlanta that sent me all over the country,” he says. “I got a feel for a lot of different types of work.” Even though he enjoyed the opportunity, John missed the stability of being in one place. He returned home to North Carolina in 1991 to become the third generation to join Gilbert Engineering, a firm that had been in operation since the 1920s.

Now in its 83rd year, Gilbert Engineering specializes in water and sewer treatment plants and pipeline work. Gilbert Engineering Company was founded in 1926 by John Neely Gilbert. Upon his death in 1966, he was succeeded by his son, John N. Gilbert, Jr., who was president of the company until 2006. At that time, his son, John N. Gilbert III became president enabling the company to continue as a third generation family-owned and operated organization. “It wasn’t difficult to turn the company over to him,” John Jr. says. “We focus on needs as they come along, and John is doing a great job.” John now serves as president of the company and handles day-to-day management, although his dad still takes care of some of his established clients. “He has a customer base he manages,” John says. “He coordinates all the design and construction of those projects.”

As company president, John wears a lot of hats. In addition to managing daily operations, he still serves as project manager on select projects. Under John’s leadership, Gilbert Engineering has continued operating as a family affair – John’s wife Anna, a former commercial banker, joined the company as controller 14 years ago. Although she initially handled marketing efforts, she expanded her role when she began to bring in more opportunities than the company could bid. Anna recognized the company’s safety program was outdated and assumed the duties of safety manager, writing and expanding the company’s safety manual and monitoring the program.

Anna says the employees weren’t necessarily engaging in unsafe practices, but in a company of Gilbert Engineering’s age, long-term employees often retain old habits. “I started asking questions about why we did certain things in certain ways,” she says. “The answer was, ‘Because we’ve always done it that way.’” Anna rewrote the company’s safety manual and implemented new training programs, particularly with respect to confined spaces and trenching. She monitors the program, and she and John are considering putting an incentive program in place. Instead of individual awards, they’d like it to be team-based.

“This gives team members the incentive to correct their fellow team members when something isn’t done properly,” John says. “It’s often the simplest things that end up costing money. When this attitude starts to take off, that’s when you develop a safety culture.” Gilbert provides safety materials in both English and Spanish, and has a translator on hand for safety and insurance meetings.

One of the most successful components of the safety program is surprise audits by an independent safety consultant. No one, not even John, knows when or where the auditor will show up. Following an inspection, the consultant writes up an audit report and submits it to the company. “It’s a good barometer for us,” he says.

Gilbert Engineering has a straightforward approach to equipment purchases and maintenance – have good machines and keep them up. When looking for someone to run his shop, John took the unusual – and expensive – step of hiring a headhunter to acquire the best man available. He found Quinten Streich, who supervises the shop, runs the PM program and handles non-warranty repairs. Carolina Cat handles their oil analysis and major repairs. “They are good equipment managers and have a competent guy in their shop,” says Mitch Christenbury, Carolina Cat. “They’ve installed Product Link on one of their machines and are considering it for their fleet. There’s a cost involved, so it really speaks volumes about their PM. They want the best oils and filters across the board.”

John says the technology use applies to the total company. “We’ve automated as much as possible – payroll, bidding, labor, equipment time, feedback – over the past few years,” he says. “We’re trying our best to use technology to reduce our overhead.”

Gilbert buys mostly new equipment, but will purchase used if they know the machine’s history, a policy that has enabled the company to remain largely debt free. “Bright and shiny is not as good as dependable and paid for,” he says. The company’s most recent acquisitions have been compact equipment. “I’ve been impressed with the usefulness of our compact machines. The crews pass them back and forth, and they are easy to handle and pick up with a crane.”

John credits Gilbert Engineering’s longevity to carefully disciplined growth. The company has a honed focus with a 90/10 ratio of public to private work. He estimates 75 percent of the company’s volume is in water and wastewater treatment plants and pump stations, with the remaining 25 percent made up of pipeline work and industrial building. Although the company concentrates on a narrow scope of work, John looks for projects he considers to be unusual and a bit of a challenge, such as a 700-foot lake crossing in High Point during which they worked with divers. He likes to perform work other companies can’t or won’t take on. In 2004, Gilbert Engineering began to bid on military work and was awarded a pump station rehab job at Fort Bragg. He hired a new project manager, Ben Alter, with experience with the Corps of Engineers before starting the project.

Receiving a high rating on the job after completion, John considers it a feather in the company’s cap. “They were easy to deal with,” says Jim Mullins with the U.S. Army Corps of Engineers, who worked with Gilbert on a sewer collection system installation. “They partnered well with us and with the sewer authority. I’ve done this for 35 years and have seen all kinds; I would highly recommend them and would work with them again. This project had a number of delays with the DOT, and Gilbert still brought in the project in on time, and would have been early.”

Like most areas of the country, the recession has severely affected North Carolina, requiring contractors in the area to rise to a challenge. “From the standpoint of acquiring work, I believe the tightened credit market is a key contributor to our economic downturn,” John says. “You have to carefully manage cash, be cautious in selecting work and contract with an eye toward being paid.” He firmly believes in having cost management controls in place, and keeps an eye on the bottom line, increasing revenues without a similar increase in overhead.

To keep the work flowing, John plans on bidding on more military projects, and is also interested in pursuing work he considers cutting edge. “We’d like to pursue more deep excavation with engineered shoring systems,” he says. “Planning and executing a project and adapting that plan to changing conditions present a real challenge.” John will continue with public work, noting the private market is severely depressed and pipeline work is cheap and highly competitive.

Gilbert counts integrity and service as the cornerstone of the company’s success, which includes the way they treat their staff of 35. The company has extremely low turnover; last year, 60-year veteran James “Dee” Scott retired from the company – a testament to the company’s tradition of treating people honestly and fairly. EW

Gilbert Engineering’s safety program set the company apart at the Contractor of the Year event, held in February in Las Vegas, earning them the Caterpillar Safety Award. In consideration for the safety award, Contractor of the Year finalists were judged by their firm’s lost time incident rate, experience mod factor, accountability, engagement, support and reinforcement, as well as safety-related contributions to the construction industry.

Gilbert Engineering has a safety program closely tailored to their needs. Their toolbox talks are specifically designed for each crew. Anna believes in consistently updating their training information, and she and John use a variety of resources to find the most useful safety training tools, including their insurance carrier, associations and Caterpillar’s safety.cat.com, in addition to the scheduled OSHA 10-hour, confined spaces and trench training. The company also promotes ergonomics and basic good housekeeping on their sites to further minimize risk. Gilbert has turned to an independent source to monitor the program – they’ve retained a safety consultant to perform jobsite inspections. The audits are random and by surprise. John says the audit reports given to him by the consultant are the best barometer of how well his safety program is working. He can simply look at the report to see what injuries could have occurred. 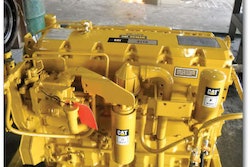 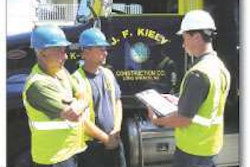 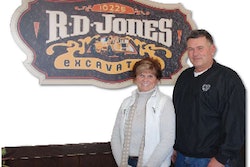