When Ann Fandozzi assumed the CEO position of Ritchie Bros. on Jan. 6th, the 62-year-old company was gearing up for its signature six-day live auction in Orlando. The company was also talking about the evolution of its data-based Asset Solutions platform, and was poised to unveil its Market Trends application, which allows users to take a deep dive into its pricing data.

Preparing for upcoming live sales and rolling out new services all came to a sudden halt in mid-March. As with the rest of the world, Ritchie was forced to make a hard turn to digital and pivoted to online-only operations in 96 hours. First dealing with employee safety issues, the company also recognized that “during the pandemic is when our customers need us the most because of the need for liquidity,” Fandozzi says.

The ability to make its digital move so quickly started years ago though, says Fandozzi. And the customer-facing challenges were more about bandwidth and capacity rather than processes, since 65 percent of Ritchie’s transactions were already conducted online.

“Our live sites were already less about auction day and more about performing all of the services our customers need, such as inspections, appraisals, marketing and managing the disposal,” Fandozzi says. “The customer experience is really melding the live and online world, so they have one seamless experience. This time has really heightened the fact that those lines have blurred for us.”

But no matter how digital your operations become, there’s no getting around that construction equipment transactions still involve a physical machine – one that has to be inspected and transported even if only from seller to buyer without the intermediary of an auction site. “We needed to throttle up how we kept our people safe in the physical world,” Fandozzi says. Among other things, this has meant customer drop-offs and pickups now have to be scheduled instead of the previous open-door policy.

Internally, though, the move to digital was a huge pivot, especially in ensuring that employees were outfitted with the ability to work from home. “Our technology organization deserves so many kudos for making this happen,” Fandozzi says.

Fandozzi is also charged with making sure the company has plenty of solvency in place to weather the storm. Ritchie leadership ran a number of scenarios of what the recovery would look like, be it short, long or interrupted by a second COVID-19 outbreak. “Even in our worst-case scenarios, the modeling shows that we should be in a really good place,” says Fandozzi, who has served in two prior CEO spots, at ABRA Auto Body & Glass and vRide, along with stints at Whirlpool, DaimlerChrysler and Ford.

What is developing in the aftermath of the pandemic is what Fandozzi calls “the tale of two cities.” Demand is staying strong in North America, unlike the soft demand seen in a normal downturn. “Our working hypothesis on why is that construction is being deemed an essential service almost everywhere around the world,” she says. Another factor in the U.S.: anticipated infrastructure stimulus packages. “People don’t want to get caught flat-footed,” she adds.

The experience is different in Europe where it’s been difficult to transport equipment across borders. “Truckers couldn’t get the equipment across a country line because they’d be quarantined for 14 days. It’s really stopped the flow of goods in a way we hadn’t seen before,” Fandozzi says.

The move to online-only has had some early successes; its May 11-15 Edmonton, Canada, auction had 23,500 online bidders, which Ritchie said was a new attendance record. By comparison, its Orlando auction in February had 18,000 registered attendees.

Demand is always the wildcard in a downturn, something Ritchie is “working overtime on,” Fandozzi says. “It’s not just coming our way. We’re doing lots of marketing and targeting.” The result is “strong” pricing, except in the oil and gas sector, which was already weak coming into the year.

Sellers who are seeking liquidity are getting it, Fandozzi says, and Ritchie has seen a “healthy flow of product.” There are sellers who are remaining on the sidelines, though; these are typically larger, healthier buyers who have plenty of liquidity and who think an infrastructure stimulus package is forthcoming.

It doesn’t mean that Ritchie will escape entirely unscathed, however. First-quarter revenues were down 10 percent to $273.3 million compared with the same period last year, and its gross transaction value – or total proceeds from all items sold in all company venues – decreased by 2 percent to $1.1 billion. In releasing the 1Q results, however, Ritchie first mentioned that its stockholder net income had increased 26 percent during the quarter over last year.

The major question for Fandozzi is one shared with most CEOs right now: what form will the recovery take? Ritchie has developed its strategy for all of the scenarios, be it a quick bounce back, a seesaw if a second wave of the pandemic occurs or a protracted climb back out.

“I’m a big fan of looking at what things are under our control,” she says. “That means keeping our people safe, ensuring we have the marketplace to give our customers liquidity and keeping our company healthy from its own liquidity standpoint.”

Will the live auction eventually go away? “I would say of all of the questions to be answered, that’s a relatively small one,” Fandozzi says. “It’s not the same as a brick-and-mortar retailer. Even before COVID-19, the auction site was about much more than the auction day.”

Managing the entire equipment disposal journey is now “overwhelmingly the use of our time,” she says. “Overwhelmingly.” 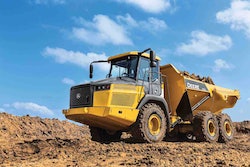 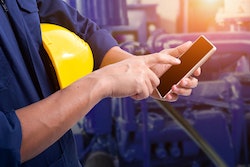 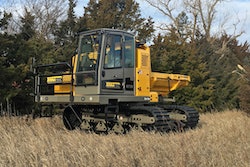