It’s aimed for urban work, tunnels, inside buildings, golf courses, schools, hospitals and other construction jobs where you want to keep emissions and noise to a minimum.

The EZ17e is slated for release next year – first in Europe and then in the United States, possibly in the last quarter of 2019.

The electric, zero-tail EZ17e mini excavator is the latest addition to the group’s zero emissions product line. It delivers the same power and performance as gasoline-powered models, the company says.

All hydraulic functions are as powerful as those of the conventional model. The battery is integrated in the existing engine compartment. The EZ17e weighs almost exactly the same as the diesel version and can be easily transported on a trailer.

While the EZ17e from Wacker Neuson can run entirely on its battery, it can also be operated while connected to the mains and even charged while in operation, thanks to its smart-charging management system.

The compact excavator is a zero-tail model. That means operators need not worry about damaging the machine when working close to walls or in confined spaces because the tail of the electric excavator never extends beyond the undercarriage.

This makes the EZ17e ideal for tunnel construction, demolition and redevelopment work in confined spaces – and for restoration projects inside buildings, company officials say.

Regulations are moving toward a reduction of noise and emissions for construction machines, and in the near future, Wacker Neuson will offer at least one emission-free product in every main product group, he says.

“Now, we can realize the entire construction process of a classic inner-city construction site, completely free of emissions and with reduced noise,” Greschner notes.

“Electric drives are becoming increasingly important. For rental companies in particular, these solutions are an interesting supplement to existing fleets as many of their customers rent products for specific projects such as renovation work inside buildings or tunnel construction,”  he says.

“Electric drives are also low maintenance. This is a huge benefit as it reduces maintenance time and costs and maximizes machine availability.”

Company officials say the battery-powered machines cut maintenance needs, including no oil nor filters, and while the costs can be higher initially, they save in the long run and make sense for dealers who rent equipment. Because customers often rent for a number of hours, they tend to skip maintenance, making machines that need less maintenance a good choice for rental businesses.

We are the only company worldwide that offers such a broad range of zero-emission construction products,” says Stefanie Wieland, head of corporate communications for Wacker Neuson at the show.

“What we are trying to offer is a flexible rental product,” Wieland explains.

Also in development are two emissions-free wheel loaders for the United States. Both can be used for applications of up to eight hours. The company says an  integrated, practical battery charger recharges batteries “very quickly.”

Other news at the Wacker Neuson booth of particular interest to contractors: The company showed two new compact excavators in the 3.5-tons class; they’re set for release in the United States this September.

One is the conventional ET35, which boasts features  good stability and a new, ergonomically designed cabin ensure.

The other is the EZ36, a zero-tail compact loader with no rear overhangs. It swings conveniently, even in tight spaces, which are navigated with the machine’s compact dimensions. 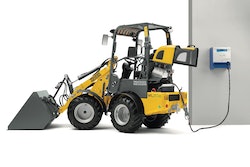 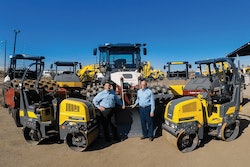