France’s Mecalac begins push into US powered by Terex acquisition

French manufacturer Mecalac used ConExpo earlier this month to launch its new Americas initiative, including establishing a holding company, Mecalac Americas, and showcasing its agreement with dealer Larusso Heavy Equipment (LHE), based out of Walpole, Massachusetts.

As part of this initiative, the company acquired the Terex production facility in Coventry, England, a deal that closed this year. Renamed Mecalac Construction Equipment UK, the plant manufactures a line of backhoe loaders and site dumpers formerly sold under the Terex, Fermec and Benford brands, in addition to compaction rollers. It will bring some of these products to the United States, and appears to be still using the Terex badging on the 6-ton TA6S site dumper and TLB840R backhoe.

Mecalac manufactures several lines of equipment, some of which do not fit easily into established equipment categories in the states. Instead of being product oriented, Mecalac is “process oriented and driven by a jobsite approach,” according to Patrick Brehmer, marketing manager. “We are interested in changing the way work gets accomplished and making the jobsite safer.”

As an example of this approach, Brehmer says that Mecalac’s MCR Crawler Skid-Excavator line is both a skid steer and an excavator. The company says the product is “150-percent loader, 150-percent excavator,” doing more than the sum of the two machines, an equation it calls 1 + 1 = 3. Dealer LHE will distribute the MCR line in Connecticut, Rhode Island and Massachusetts, along with the company’s AX and AF wheel loaders and MWR wheeled excavator.

Wheeled excavators: With an emphasis on stability, the company’s new MWR range uses a lower positioned cab, and combines the rotation of a wheeled excavator and the stability of a telescopic handler. As a result, the rotating upper carriage is integrated into the undercarriage. Thanks to a new swivel joint, the tank, traditionally positioned on the upper carriage is now integrated into the undercarriage between the wheels. Operators have a three-function selector on the dashboard: park, work or drive.

Crawler excavators: The 8 MCR high-speed model, for example, combines the features of a compact excavator, which houses the engine on the upper section, with those of a compact loader on a triangular tracked chassis. Moving at a speed of up to 6.2 mph, the model can be easily switched from compact excavator mode to loader mode.

Swing loaders: The AS 900, for example, has a bucket volume of 1.79 to 1.96 cubic yards, and features a Monoboom with two lift cylinders.  The cabin has two full doors, allowing for safe entry and exit in confined spaces. It is designed for building, road construction, landscaping, rental and recycling. 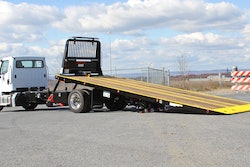 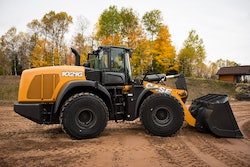 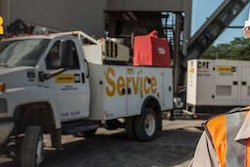