The N-13 bridge’s supports were washed out during March 2019 flooding of the North Fork Elkhorn River at Hadar, Nebraska. Credit: Nebraska DOT

Nearly a year after historic flooding and blizzard conditions closed 3,300 highway miles and 27 bridges on the Nebraska State Highway System, the state’s department of transportation announces it has reopened the system’s final bridge that was damaged in the March 2019 disaster.

Contractor Herbst Construction of Le Mars, Iowa, has completed most of the $2.8 million replacement project for the N-13 bridge east of Hadar. All that’s left is guardrail surfacing, grading and seeding, which is scheduled to be completed in spring, NDOT reported February 7.

The N-13 bridge spans the North Fork Elkhorn River. Floodwaters washed out the bridge supports, causing it to collapse.

The historic flooding, which began March 13, 2019, was the result of heavy rains combined with melting ice and record-level snowfall. The Nebraska DOT estimates damage to the state’s highway system and local roads was $190 million.

For video of the damage, see below:

The DOT says its personnel worked around the clock through March 29 closing roads, detouring traffic and repairing damaged roads. By March 23, after the floodwaters receded, all but 200 miles of roadway remained closed, the agency says.

For video of the repair work, see below: 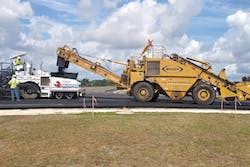 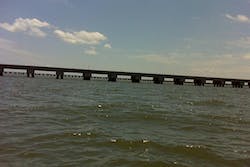