Can John Oliver’s stand on U.S. infrastructure do for highway funding what “Last Week Tonight” did for net neutrality? 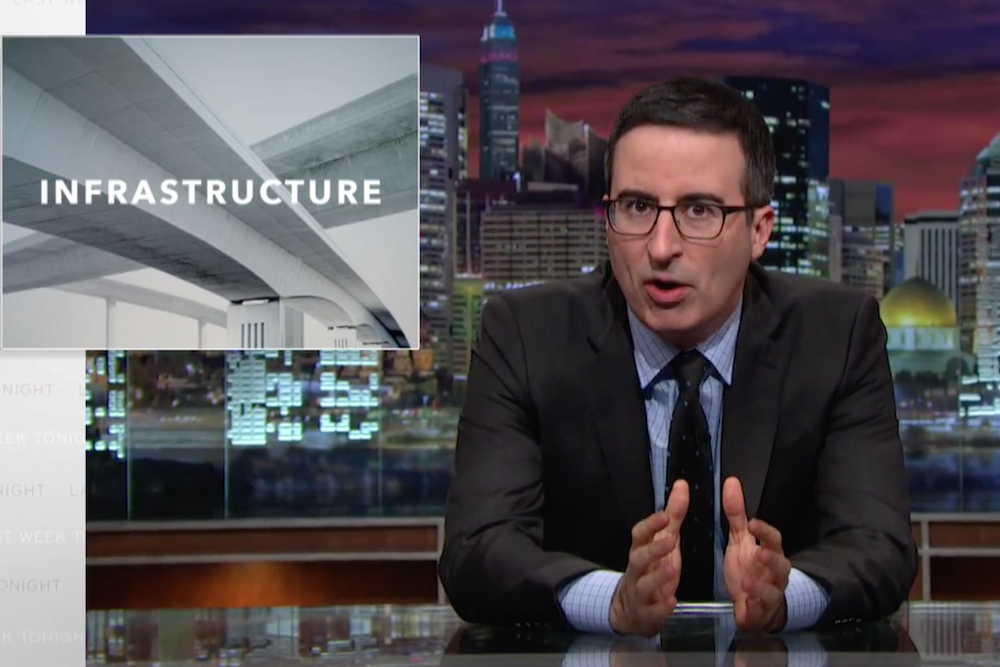 John Oliver, on the latest episode of his HBO program “Last Week Tonight”, aimed his comedic wit at the issue of the need for infrastructure spending in the U.S., much in the same way he targeted the net neutrality issue in 2014.

Many pundits believe his call to action last year, funny as it was, helped push along public interest and reaction to the net neutrality issue. After his show discussing the topic aired, and Oliver asked viewers to send their comments to the Federal Communication Commission, the FCC’s website reportedly shut down due to the influx of comments.

In his 21-minute “Infrastructure” segment on his March 1 show, Oliver pointed out that the reason folks in the U.S. are so apathetic about their road and bridge conditions is because “infrastructure isn’t sexy”, a point he highlighted with numerous video snippets of politicians saying variations on the same phrase. You can watch the entire segment below. (Be mindful of where you watch as the segment does contain the use of mature language.)

Oliver pointed out that multiple blockbuster movies focus on the destruction of infrastructure, such as bridges, dams, and highways, making this “sexy.” He of course featured a montage of such destruction.

He also pointed out the seriousness of the issue, citing numerous reports of crumbling bridges, low grades and world rankings for the U.S. infrastructure system, and the running on of rhetoric from politicians regarding a fix.

He specifically cited the show’s efforts to get a response from Speaker of the House John Boehner on what plans he may have for infrastructure funding. Repeated emails and a phone call did not solicit a response, so Oliver’s team pursued Twitter as a venue. The lack of response from Twitter led them to find that Boehner uses Vine, which Oliver used to pose his question yet again, “Mr. Speaker, how specifically will you raise revenue for the U.S. Highway Trust fund?”

“Look, the lack of political urgency in tackling this problem is insane. And you cannot tell me that you are not interested in this, because every summer people flock to see our infrastructure threatened by terrorists, or aliens,” Oliver said.

“But we should care just as much when it’s under threats from the inevitable passage of time,” he added. “The problem is no one has made a blockbuster movie about the importance of routine maintenance and repair. Or they hadn’t. Until now.”

So Oliver’s team put together a lengthy trailer for a new blockbuster, “Infrastructure: If anything exciting happens, we’ve done it wrong.”

The trailer features A-list actors such as Edward Norton, Steve Buscemi, and Vincent D’Onofrio, who provided tongue-in-cheek seriousness to lines delivered about inspecting bridges and tightening bolts. For the latter, Norton offered sage advice over the phone to remember “Lefty loosey, righty tighty” to a concerned maintenance technician.

The segment was funny, and a bit sad, but it was lacking in one key area compared to the show on net neutrality issue: a call to action.