Don McLoud
Aug 17, 2022
A rendering of the future Harbor Bridge at the Port of Corpus Christi. The contractor on the project has been issued a notice of default.
TxDOT

The Texas Department of Transportation has issued a notice of default to the developer on the future Harbor Bridge in Corpus Christi over safety concerns.

TxDOT says the Flatiron/Dragados LLC joint venture “has refused to acknowledge the safety issues that have been identified or taken any steps to correct them.”

The default notice gives design-build team Flatiron/Dragados 15 days to present a plan to correct the problems or face termination from the $803 million project to build the second-longest cable-stayed bridge in the U.S. The new bridge will replace the current Harbor Bridge that carries U.S. 181 over the ship channel at the Port of Corpus Christi.

The default notice follows TxDOT’s July 15 suspension of work on the cable-stayed section of the bridge for safety concerns, including the possibility of collapse under certain load conditions. The agency says it notified Flatiron/Dragados of the problems April 29 and that it “has consistently communicated its concerns…about non-conforming design flaws.”

“There were assurances by Flatiron/Dragados that these issues had been addressed,” said TxDOT Executive Director Marc Williams.

The safety concerns over the design of the bridge, construction of which began in 2016, surfaced in 2020. The bridge’s engineer, FIGG Design Group, was fired by TxDOT that year following a report that blamed the firm for the 2018 fatal collapse of a pedestrian bridge under construction at Florida International University in Miami. FIGG was replaced by a joint venture of Arup and Carlos Fernandez Casado, called Arup-CFC, as the engineer of record. The new engineering team was hired by Flatiron/Dragados.

TxDOT says the safety issues include the foundations, load and weight capacity, structure and the stability of the main stay bridge. TxDOT hired SYSTRA International Bridge Technologies (IBT) in 2020 for a third-party review, and it confirmed the agency’s concerns, TxDOT says.

In a July 15 letter to Flatiron/Dragados, TxDOT outlined the following safety issues cited in IBT’s report:

The letter states that Flatiron/Dragados and the engineering team of Arup-CFC “continue to deny any problems with the design despite ample evidence to the contrary.” The letter adds that “TxDOT does not believe it is responsible or safe to proceed with the erection of the NHB (New Harbor Bridge) superstructure (including, but not limited to the delta frame installation) because that work exacerbates four of the five major issues raised by IBT.”

The letter concludes: “Based upon the independent analysis performed by IBT and the resulting concerns about the ongoing erection of the NHB superstructure, TxDOT has concluded that there is or will be an emergency or danger to persons or property related to the design deficiencies.”

TxDOT says it does not yet have a timeline on when construction could resume on the cable-stayed portion of the bridge, but says it will ensure it is built to the highest quality standards.

The bridge is scheduled for completion in 2024, although that date is now in doubt. Currently, drivers are using the existing 2.25-mile steel bridge built in the 1950s. It will be demolished after the new bridge is completed.

The new bridge will have three lanes in each direction, consisting of 6.44 miles of bridge and connecting roadway, according to TxDOT. Its main span will extend 1,661 feet and become the second-longest cable-stayed bridge in the U.S. and Canada when completed. The Gordie Howe International Bridge between Detroit and Canada will have the longest cable-stayed span, of 2,799 feet, when completed, also slated for 2024. 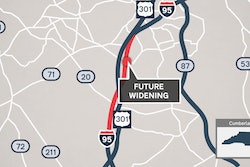 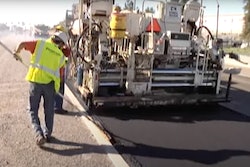 Has the Time Come for Making Asphalt Roads Out of Scrap Tires? 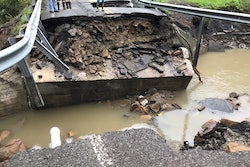