Friction Prediction: These Machines Tell Where the Crashes are Likely to Be 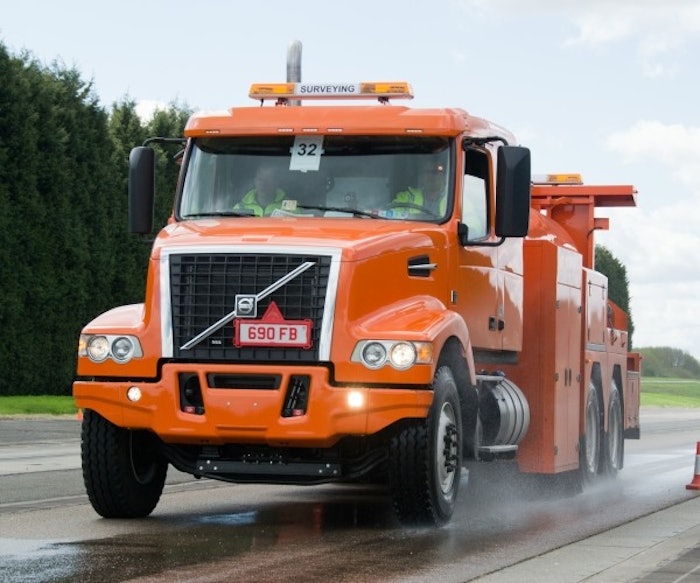 This SCRIM truck measures pavement friction. The data it collects are used to help predict places where crashes are more likely to occur.
Kentucky Transportation Cabinet

The orange SCRIM, which stands for Sideway-force Coefficient Routine Investigation Machine, collects data to analyze the connection between highway crashes and pavement friction, according to the Kentucky Transportation Cabinet.

The SCRIM can pinpoint areas of low pavement friction, where vehicles are likely to hydroplane or meet less skid resistance at high speed. That enables KYTC to better set its repair priorities with a goal of making roads safer.

“The objective is to reduce fatal and serious-injury collisions by incorporating friction data into our selection process for resurfacing and other pavement treatments," Kentucky Transportation Secretary Jim Gray said. The state logged 780 deaths of Kentucky residents from crashes last year.

The SCRIM-equipped Volvo trucks measure the wet skidding resistance of a road surface. The SCRIMs are manufactured in the United Kingdom by W.D.M. Limited and were first used in the U.S. in 2015, according to an N.C. Department of Transportation study.

The SCRIM works this way:

Water flows from the machine onto the road in front of the machine's test wheel, which is a smooth pneumatic tire mounted mid-vehicle. The wheel is angled at 20 degrees and applied to the road surface under a known load. When the SCRIM moves forward, the test wheel slides forward on the wet road. The SCRIM measures the sideways force.

The SCRIM also uses a high-speed laser to measure the road's macrotexture, which is important for preventing hydroplaning and providing skid resistance at high speed, according to the NCDOT study.

The SCRIM can also continuously measure cross-slope, grade, temperature and curvature while being driven up to 50 mph, according to the Federal Highway Administration. The FHWA bought a SCRIM in 2018 to assist states in using the Pavement Friction Management Guide by the American Association of State Highway and Transportation Officials.

The FHWA reported that after using the SCRIM on 4,000 miles of highway, it confirmed "a strong association between crashes and continuously measured frictional pavement properties." And that it could potentially lead to a 25% reduction in crashes if all recommended treatments were made on the measured areas.

"FHWA is interested in helping agencies investigate the benefits of using continuous friction measurement equipment such as the SCRIM and the development of proactive PFM (pavement friction management) programs," the agency says. "Such programs have the potential to significantly reduce the number and severity of crashes by decreasing pavement-friction and textured-related crashes."

As for Kentucky, KYTC Secretary Gray says, "By enhancing our pavement management practices in this way, the cabinet will be taking a proactive approach to making roadways safer for motorists throughout the commonwealth."