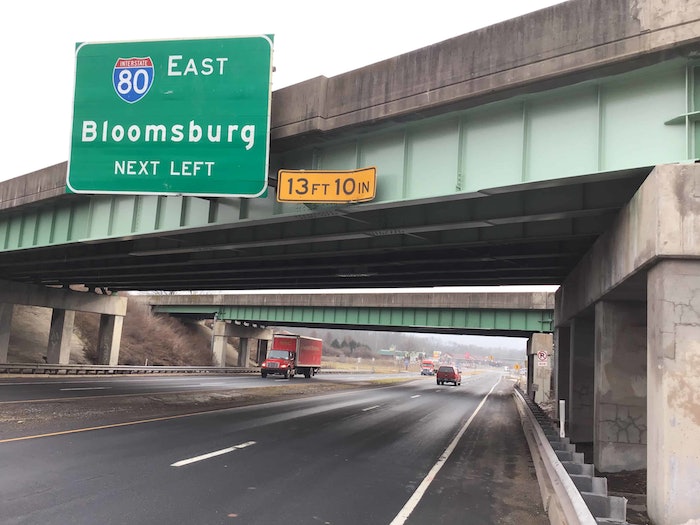 The I-80 bridge over Route 54 in Valley Township in Pennsylvania recently underwent a $500,000 emergency repair after two beams were damaged when struck by an over-height vehicle.
Photo credit: PennDOT

The proposal is part of a search for additional, alternative funding as the state faces dwindling gas-tax revenues, less federal funding than expected and interstate bridges that are nearing the end of their useful lives. The Pennsylvania Department of Transportation receives $6.9 billion a year in funding and estimates it has $15 billion in needs for the interstates for the 2020-2021 fiscal year.

The plan, as proposed by PennDOT, would target five to 10 major interstate bridges in need of replacement. Implementing the plan would involve developing a public-private partnership in which the private entity would take on not just the bridges’ design and construction but also their financing, operations and maintenance for 30 years.

Such partnerships – called design-build-finance-operate-maintain, or DBFOM, concessions – are becoming more prevalent across the country as cash-strapped states seek innovative alternatives to the gas tax. The partnerships have the advantage of allowing DOTs to start major projects more quickly, while spreading out funding over a longer period of time. The proposed PennDOT partnerships would leverage future revenues to issue bonds to pay for design, construction and other costs, with payments being made by the state to the private entity over the length of the 30-year contract.

“It is our desire to set realistic, affordable toll rates to generate the revenue to pay back the capital costs in a 30-year maintenance period,” said Kenneth McClain, director of PennDOT’s Alternative Funding Program, during a recent virtual presentation to the Associated Pennsylvania Constructors. “It helps us to deliver these projects now.”

But the mention of the word “toll” is already hitting opposition.

“When I say the trucking business cannot afford tolling, it is not about being greedy or increasing profits, it is about maintaining the little profit we have and survival,” said Joseph A. Butzer, interim president of the Pennsylvania Motor Truck Association, during a recent hearing before the state Senate’s transportation committee.

“Placing new tolls on existing bridges will increase the cost to move goods throughout the supply chain, hurting Pennsylvania’s economic competitiveness and consumers,” he said. He added that trucking companies would seek alternate routes to avoid the tolls. “Fewer trucks passing through Pennsylvania will negatively impact communities and businesses that rely on the unhindered flow of people and goods.”

In making their case for tolling, PennDOT officials say that without the additional revenue, the state will have to siphon funds from local and regional projects to replace the aged interstate bridges. Such projects are important to local contractors and engineers, as well as to the state’s economy. Implementing the toll plan would inject $1.8 billion of new revenue and provide opportunities for contractors, said PennDOT Secretary Yassmin Gramian during the Senate committee hearing.

She touted the tolling as “a fair, user-based funding source,” and there would be ways to reduce the costs for drivers, such as discounts for commuters and those with low incomes.

The system would have to be self-supporting. “Bridge tolls would have to have enough prospective revenues to pay for (the bridge’s) replacement or it won’t be funded,” she said.

The program would ultimately make the state’s interstate system safer, including for truckers, she added. Many of the bridges were built in the 1960s and were not designed for the heavy loads on the road today, and replacing them would prevent having to reduce weight limits or close bridges.

She said the department plans to present a list of interstate bridges for potential replacement in mid-February and that the proposed toll spots would be spread around the state.

Meanwhile, PennDOT is considering other alternatives to gas tax revenues, such as congestion pricing and managed lanes, Gramian said.

For more on the state of the nation's bridges, including which states have the best and worst bridges, check out Equipment World's 2020 Better Roads Bridge Inventory.