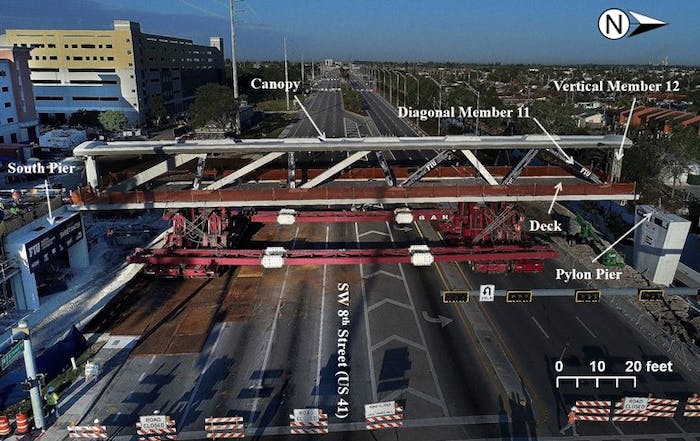 Main span being moved on March 10, 2018, prior to placement on the south pier and north pylon pier, looking to the west. (Labels added by the NTSB; photo part of NTSB report.) 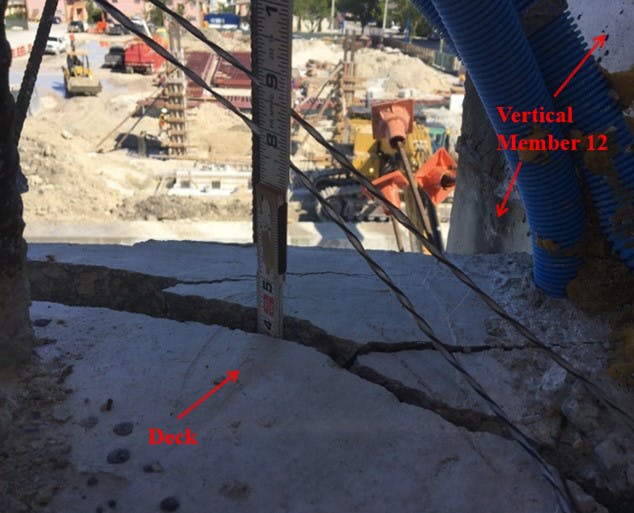 Crack beside truss member 12 of the FIU pedestrian bridge shown two days before the March 15, 2018, collapse in this photo by contractor Munilla Construction Management and provided by the NTSB.

Since being blamed for the deadly collapse of a pedestrian bridge at Florida International University in 2018, troubles have been mounting for FIGG Bridge Engineers, including being recently suspended from all jobs with federal funding and being fired from a second major bridge project in Texas.

“FIGG Bridge Engineers Inc. will likely not survive if the suspension is not lifted in the very short term,” she said.

Last month, the Federal Highway Administration placed FIGG on immediate suspension of any projects that involve federal funding. The FHWA also proposes that FIGG be debarred from any federally funded work for 10 years. FIGG is challenging the suspension and proposed debarment in U.S. District Court.

FIGG designed the FIU pedestrian bridge in Miami, which a National Transportation Safety Board report in October 2019 said collapsed due to faulty load and capacity calculations by FIGG and its failure to properly address cracking. The collapse killed six people and injured 10. Several other entities were also cited in the probable-cause report, including contractor Munilla Construction Management, the Florida Department of Transportation, FIU and inspection firm Bolton Perez & Associates, for not closing the road beneath the bridge or conducting proper peer review.

FIGG has denied the NTSB report’s claim against it and has said the cause of the collapse was faulty construction. 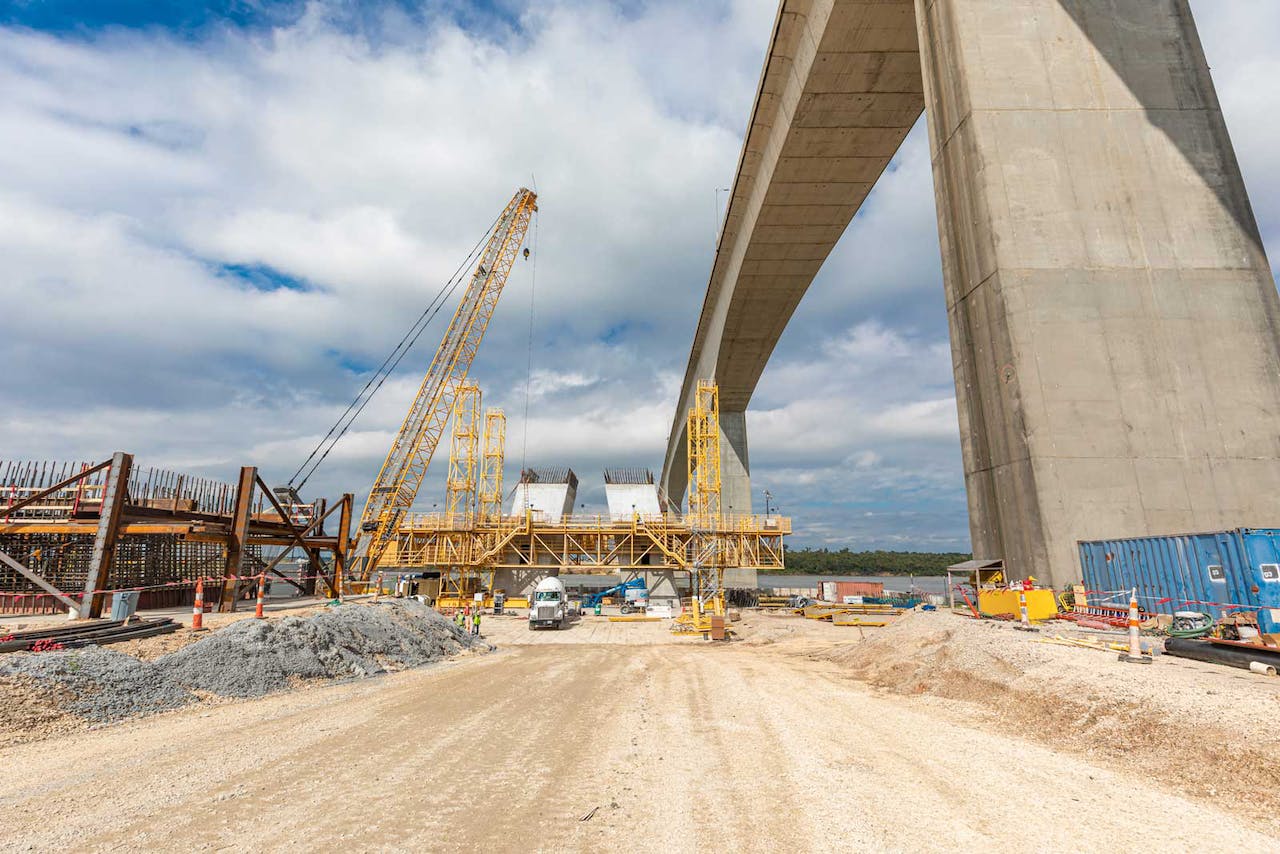 Since the NTSB report on the FIU bridge collapse, FIGG has lost two huge projects in Texas.

Then on August 11, the firm was fired from the $962 million Sam Houston Tollway Ship Channel Bridge Replacement Project, overseen by the Harris County Toll Road Authority. FIGG had been on that project since 2013. In Linda Figg’s court declaration filed this month, she said the project’s contract was worth $520,000 a month and represented about 42 percent of the firm’s total revenue.

She noted that under the FHWA suspension the firm cannot send in requests for proposals for upcoming projects that have federal funding. She said such projects with RFPs due over the next 120 days total $100 million and that it has been “virtually impossible to obtain any work.”

If the suspension stands, she said, the firm will be forced to implement layoffs and furloughs this month and could close. The Tallahassee, Florida-based firm has about 75 employees. It was formed in 1978 by Eugene Figg. When he died in 2002, daughter Linda Figg took over the company.

“In conclusion, the immediate financial and reputational harm caused by the FHWA action and government-wide suspension poses a real and imminent threat to the very existence of the company,” she said in the court declaration. 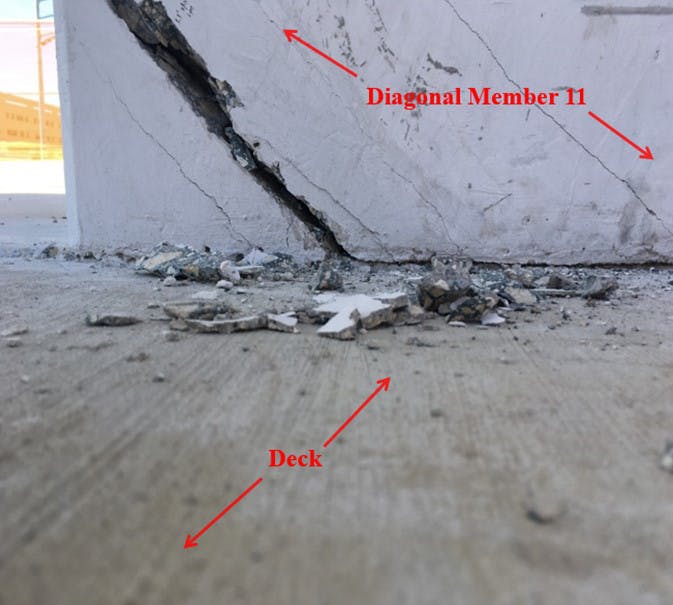 One of the cracks on truss member 11 of the Florida International University pedestrian bridge in Miami shown two days before the March 15, 2018, collapse in this photo by contractor Munilla Construction Management, and provided by the NTSB.

On July 14, the FHWA notified FIGG that it was being placed on immediate suspension and being proposed for a 10-year debarment from federally funded projects, according to court documents.

The suspension lasts as long as the proceedings for determining whether FIGG should be debarred. The FHWA said the suspension and proposed debarment are not punishments but designed to protect the federal government and public interest in regards to safety and work quality on federally funded projects.

The FHWA cited the NTSB report that said FIGG’s load and capacity calculations for the FIU bridge led to design flaws that ultimately caused its collapse. It said FIGG had failed to identify the significance of cracking before the collapse, understand the relevance of the distress and take appropriate action to prevent the collapse.

It also said FIGG had failed to accept the report’s recommendations:

“The FIGG public challenges to the NTSB findings both failed to accept the need to implement the NTSB recommendations and findings to fix the problems identified and to prevent similar failures in the future.”

In response to the suspension and proposed debarment, FIGG has filed an appeal in federal court and asked for a temporary restraining order on the FHWA suspension.

Documents say the company has “performed over 230 major bridge projects in 42 states and six countries at value of over $14 billion” and that many of its projects have won awards.

It also argues the FHWA is out to punish FIGG and make an example out of it, and it cites the time gap between the collapse, subsequent reports and FHWA’s suspension:

“That FHWA took so long to impose this suspension suggests that this action is less about FIGG’s present responsibility or ‘ongoing threats’ to the public interest – the appropriate focus of suspensions and debarments … – and more about punishing FIGG for standing up for its hard-earned and unblemished reputation by disagreeing with the report’s findings that were made without due process.”

It also says the FHWA has not taken action on any of the other entities named in the NTSB report.

In asking the court to deny FIGG’s request, the FHWA response says the FIU bridge collapse and the six deaths and 10 injuries it caused make it the most serious case the agency has considered in the last decade.

“FIGG chose to save money by failing to properly conduct peer review requirements,” its response says. It adds that FIGG “recklessly neglected to take adequate steps to address growing cracks in the bridge, including on the day of the bridge collapse.”

As to loss of work, the agency responds:

As to why the FHWA has not taken action against the other entities cited in the NTSB report, the agency responds, “… although to date FHWA has not suspended any other individual or entity based on the FIU bridge collapse, that does not mean that FHWA cannot or will not do so.”

On July 20, the U.S. Department of Transportation’s Office of Inspector General presented a review to House and Senate appropriations committees on the firms involved in the FIU bridge’s design and construction.

The report said 41 firms were identified in the design, construction or inspection of the FIU bridge. Of those, 17 had been cited for workplace safety violations between January 2010 and January 2020.

Six months after the bridge’s collapse, OSHA cited five firms, including FIGG, with related safety violations, such as failing to protect workers when potential bridge collapse was evident. Those cases have all been contested and remain unresolved as of June 17, according to the report. The other firms cited by OSHA are Munilla Construction Management (MCM), the general contractor for the bridge’s design and construction; Network Engineering Services/Bolton Perez & Associates, which performed engineering and inspection services; the Structural Group of South Florida, which performed construction and concrete placement; and Structural Technologies, which performed construction and post-tensioning.

“We found that, as of April 2020, none of the 41 firms had been disqualified from receiving federal contracts involving federal funds or certain types of federal assistance,” the report concludes. 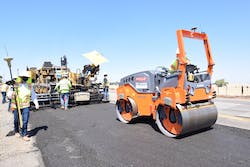 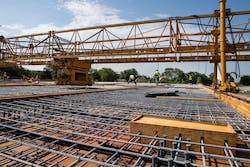 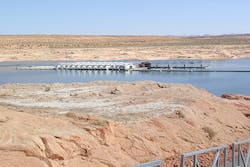 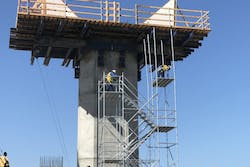