A Boston startup company used the recent 2019 World of Asphalt show to launch the latest feature of its app and software designed to make it easier for construction companies to dispatch and track their material haulers.

Rather than placing tracking hardware on trucks, the HaulHub app is downloaded on the driver’s phone and tracks the drivers’ positions when they’re on the job.

Tracking systems that use hardware track only the vehicle, which could have as many as 10 drivers operating it over time, says HaulHub CEO Joe Spinelli. The HaulHub Analytics software will rate drivers, letting contractors, fleet managers and dispatchers know which drivers are the most productive so work can be prioritized accordingly.

“I want to know who the best drivers are from the worst drivers, and I want to work with the best ones,” Spinelli says.

The app feeds other information, such as the drivers’ locations, how long they spend loading, how long they are on the jobsite and their wait times. The company gets a real-time overview of its drivers and trucks, where they are and what they are doing. HaulHub also takes care of the paperwork, including billing and insurance.

HaulHub monitors the drivers, as well, and watches for any situations that could lead to a safety or productivity problem.

For instance, the system calculates the real-time cost per ton of each driver, which factors in the driver’s wait time for loading and unloading. And if one driver’s cost is much higher than the other drivers, his information can be zoomed in on to find out why.

Spinelli also presents an example of a driver who is underperforming because of fatigue, and the system can help alert his supervisor and others that he needs to be checked on.

Each driver simply downloads the HaulHub app on his or her smartphone. The app will then send job information to the drivers, telling them where to go and job instructions.

“They use the app to get to work,” Spinelli says. “The contractor doesn’t call them anymore.”

After the driver accepts the job, the app will send the location back to the office and give real-time updates.

The drivers no longer have to call in to the dispatcher to find out their assignments, and the dispatcher can send jobs through the app without having to spend time talking on the phone. Dispatch can also relay messages to the driver.

With new drivers, HaulHub sends their driving contract to them via the app to be signed electronically.

HaulHub generates a weekly accounting file for the contractor. It also provides a daily report with the cost per ton and performance information for each driver, jobsite and loading site. A 6-hour shift of truck movements can be watched in a 10-minute time lapse.

Spinelli began working on HaulHub as a side project while running a construction firm in the Boston area.

“I was trying to help my own construction company deal with our trucking issue,” he says.

Since then, he says, the app has been tested on tens of thousands of shifts among 12 contractors in the Northeast.

He says the biggest concern he’s run into is people afraid the app will replace workers, particularly dispatchers.

He also dispels the notion that older drivers will resist using the app because they are unfamiliar with smartphone technology.

“These guys could take a motor out of a boat, rebuild it on a set of sawhorses, put the motor back in the boat,” he says, “and you’re telling me you can’t hit a couple of buttons on a phone?” 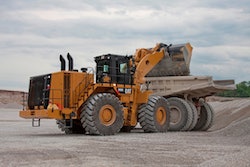