Tropical Storm Harvey flooded a section of the Sam Houston Tollway West and a Beltway 8 frontage road at Boheme Drive for nearly two weeks. A sinkhole had also formed beside the frontage road. (The sinkhole can’t be seen in this photo, but it is located just behind the white truck in the left background.) Source: TxDOT

Joe Harper had just hit the road to work September 7 when his mobile phone went off at 6:30 a.m.

The Harris County Toll Road Authority wanted to know if he could immediately mobilize enough workers and equipment to fix a giant sinkhole at the Sam Houston Tollway in Houston.

Tropical Storm Harvey’s rains had sent the nearby Buffalo Bayou to record flood levels, leaving the tollway and the Beltway 8 frontage road at Boheme Drive underwater for almost two weeks.

Flooding from the storm had covered much of the country’s fourth-most-populous city, rendering major highways and roads impassable and stranding thousands of residents. Repairing the flooded section of the tollway and filling the sinkhole at the frontage road that led to and from nearby flooded neighborhoods were the top priorities for the tollway authority and the Texas Department of Transportation’s Houston District.

After seeing the damage, the agencies immediately got on the phone with their contractors.

That’s why Harper, president and chief financial officer for Harper Brothers Construction, got the call at 6:30 a.m.

“We’ve really got a big problem,” the HCTRA official said.

“OK, we’ll be there,” Harper responded.

‘The water had so much pressure’

HCTRA and TxDOT engineers were aware that the long-term flooding at the tollway and the frontage road had caused damage and a sinkhole, but the extent of that damage was unknown because the water was so high – as much as 14 feet in some sections.

TxDOT engineers even tried to hitch a boat ride with a team of Oklahoma fire and rescue workers in the first few days of the flooding. The rescue workers were driving their boats over the flooded Beltway 8 to help residents, but it was still too dangerous to get the engineers close enough to assess the damage. So they had to wait for the water to recede enough into the bayou to get a good look.

Eventually, on September 6, TxDOT and HCTRA crews could start pumping. After 22 hours, the water was gone from the roadways, and the damage could be assessed.

Fortunately, the sinkhole was not directly under the frontage road, which is elevated above the tollway. The hole had opened about 20 feet deep and 50 or more feet long in a grassy area by the road’s retaining wall. Below the frontage road, though, the tollway’s southbound lanes had buckled and were raised about 4 feet. The lanes are in a depressed area that had been filled with an estimated 70 million gallons of water. What engineers didn’t know until the pumping ended was that water had also been rising underneath the toll road.

“The water had so much pressure, it was actually shooting up through the longitudinal joints in our pavement in the depressed section,” says John Tyler, HCTRA deputy director of engineering. “It was just an incredible amount of pressure coming in that hole.”

That left a five-lane section about 650 feet long in the southbound tollway lanes needing excavation and replacement of both the base and the pavement.

At first, HCTRA engineers thought the drainage system under the road might have failed. So they desilted the drains and ran cameras down the lines. No damage was found.

The next concern was making the area safe for workers. The retaining wall on the above frontage road at the sinkhole had to be shored up.

“We’re working up above; they’re working down below,” says Karen Othon, public information officer for TxDOT’s Houston District. “We had to place bracing on the retaining wall from down below on the toll road facility so that any of the work that we were doing would not cause any safety hazard to the people that were working down below.”

‘We worked day and night’

Less than three hours after the 6:30 a.m. call, Harper arrived on the site with equipment and crews ready to go to work.

He found a crowded scene with TxDOT and HCTRA staff, a TxDOT contractor and another HCTRA contractor. The transportation agencies had called on contractors working on other projects for them and issued change orders to speed up the road-repair process.

Harper Brothers would not be filling the sinkhole. That would be the responsibility of the TxDOT contractor, Williams Brothers. 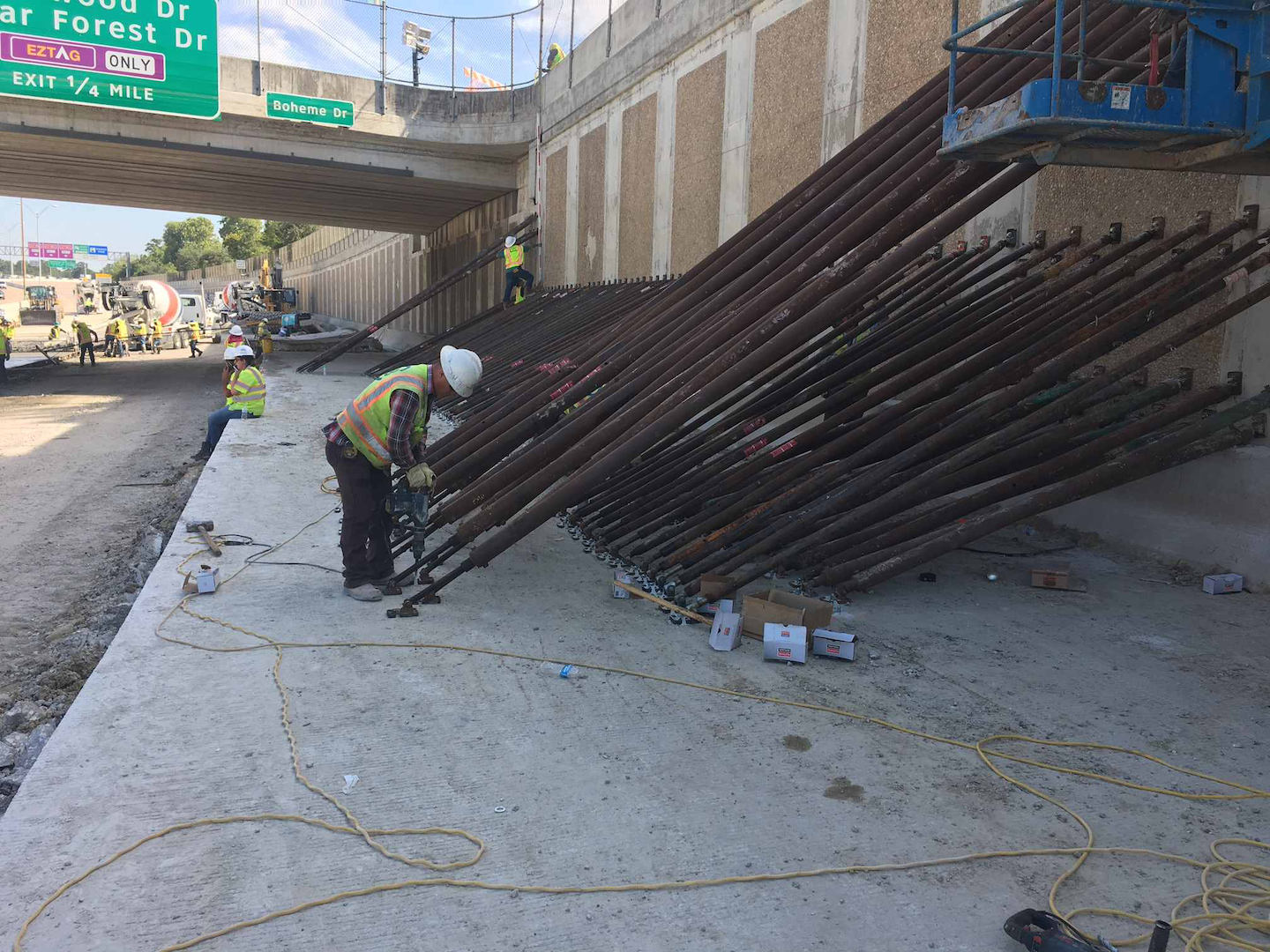 By virtue of having its subcontractors on site first, Harper Brothers’ job would be to secure the tollway’s side of the retaining wall and tear out the damaged pavement and road base on the tollway. His crews would prepare the section for the other HCTRA contractor, ISI, to replace the concrete and complete the roadwork.

Up above at the frontage road site, Williams Brothers had cut into the pavement and determined that no damage had occurred beneath that road. Its next task was to fill in the sinkhole, but it had to do so in stages.

“They couldn’t fill it up completely at one time because they were concerned about the pressure that would be placed against that retaining wall,” Othon says.

They also had to contend with drivers wanting to travel through the area and those who just wanted to get a selfie with the sinkhole.

“A lot of people were curious,” she says. “… They were getting too close to the work that was going on.” So the contractor put up orange fencing around the entire area to keep gawkers out.

Harper said his crews worked around the clock to secure the retaining wall on the toll road with braces.

“We worked day and night,” he says. “We got the wall braced so that when they filled that sinkhole up with concrete it wouldn’t bust out.”

Then Harper Brothers crews began excavating the pavement and subgrade on the southbound lanes. ISI came in to grade and replace the concrete on the tollway. The tollway’s northbound lanes were deemed to have no damage and were reopened the day after being pumped out.

After the sinkhole was filled in, Williams Brothers rebuilt the frontage road pavement and had two lanes back open September 12, Othon says. All lanes were open three days later.

“Everything along this bayou was closed,” says Tyler of the flooded Buffalo Bayou, which runs east through the city of Houston.

“If you lived north of the bayou and worked south one mile away, it was taking you three hours to make the whole loop around to get to your office. It was an incredibly large impact to traffic.”

Tyler says having the toll road back in action by September 11 was a big boost for the city’s mobility. It couldn’t have come any later, either. It opened around 5 a.m. September 11, the day that students returned to school after being out for two weeks because of the storm.

“With having these two contractors working together as well as they did,” Tyler says, “I was impressed by how quickly it happened. … They did a great job with getting everything done and opened.”

“The fact that they came out there on a Thursday morning, and by 10 a.m., had crews and equipment onsite – it’s a good example of the relationship we have with our contractors that we work with on a daily basis,” she said.

“By us being able to open up this frontage road as quickly as we were able to, that helped those local residents who were trying to get in and out of their neighborhoods to start that demolition process on their homes,” she says.

Harper says he was honored his company could help and was particularly proud of his employees, some of whom had home damage of their own.

“To have people and equipment working within a couple of hours of the call, I felt like the reaction time was there. Everyone had a great attitude,” he says. “We had not discussed anything in terms of payment; that was not a priority. 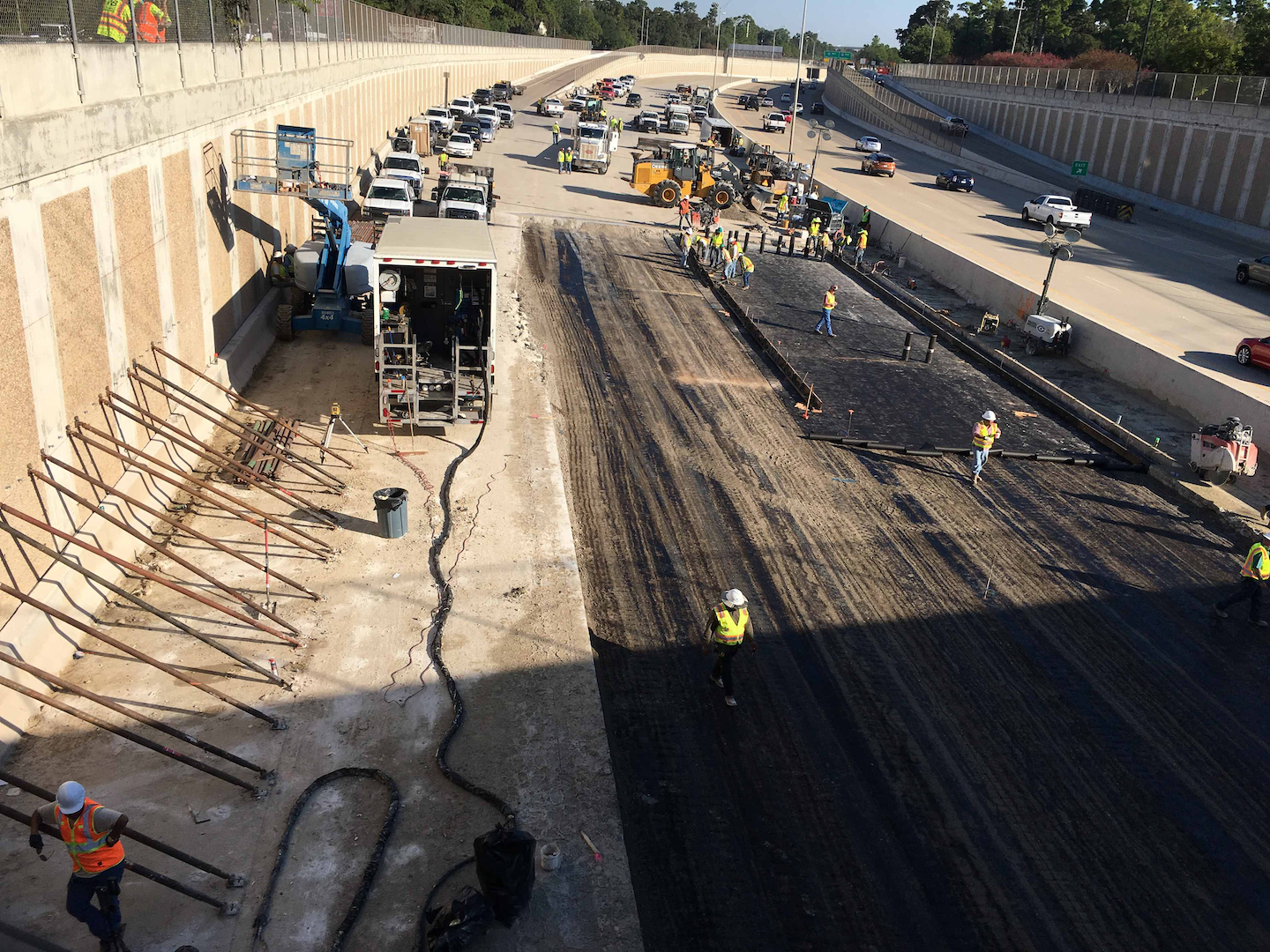 Road crews repair the southbound lanes of the Sam Houston Tollway, a section covered by an estimated 70 million gallons of water from the rain-swollen Buffalo Bayou. At left, crews had to first brace the retaining wall, which backed up to a large sinkhole, to make the work area safe. Source: TxDOT 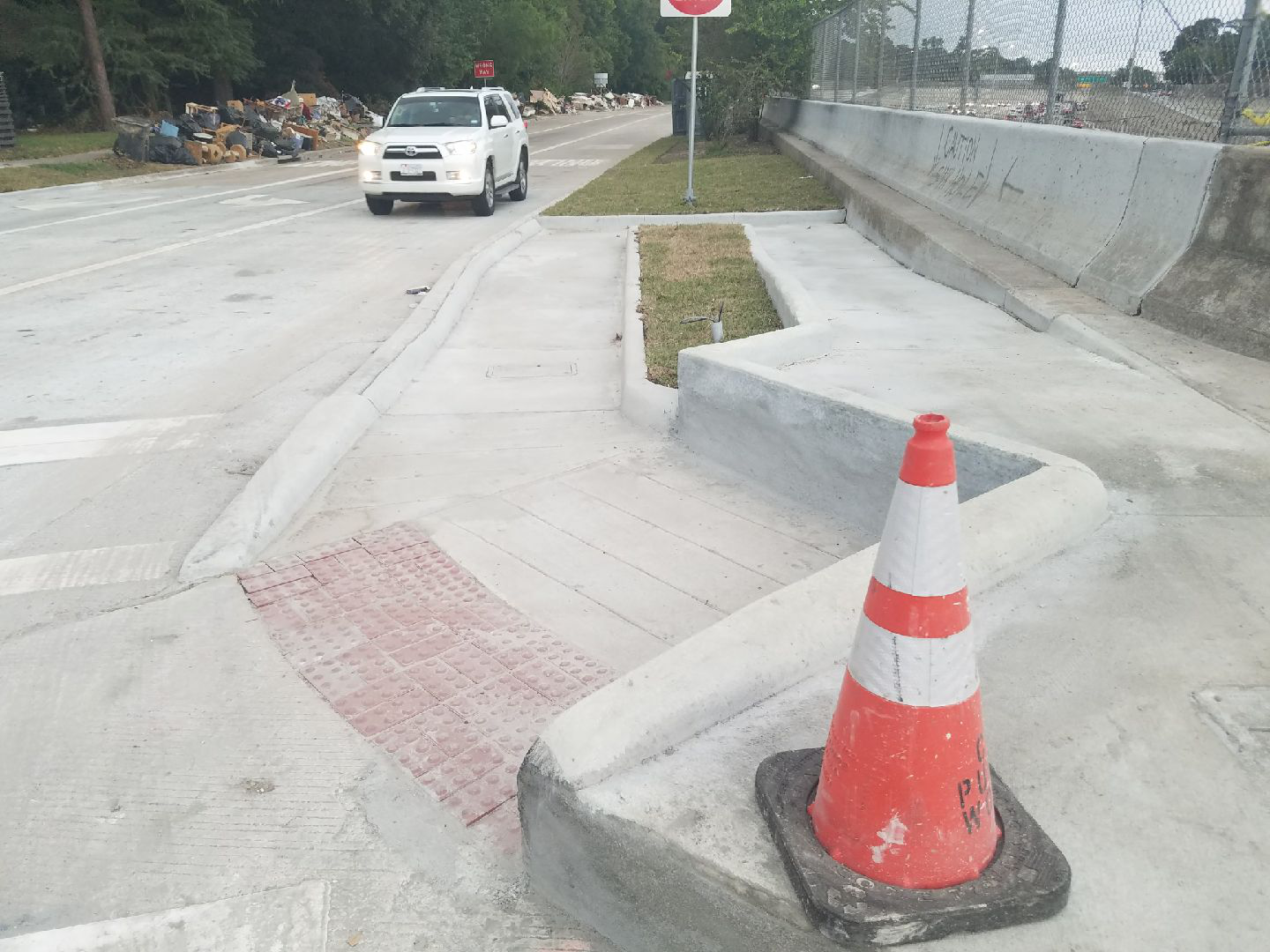 The repaired site of the Beltway 8 frontage road sinkhole. Source: TxDOT
Get the business tips, industry insights and trending news every contractor needs to know in the Equipment World newsletter.
Read Next