A new report from the American Road & Transportation Builders Association (ARTBA) indicates an annual transportation investment increase of $264 million for Kansas could have a nearly $600 million economic impact on the state. 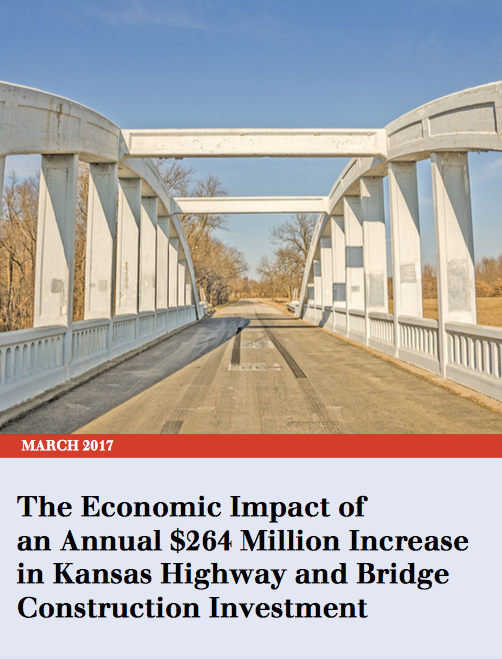 The Kansas Contractors Association commissioned the association to conduct the study. ARTBA chief economist Alison Premo Black, who conducted the research, recently testified about the results before a state legislature hearing.

The $264 million figure comes from a suggested state motor fuel tax increase of 15 cents per gallon. For each driver, that would come to between $5 and $10 a month, but would “help businesses increase output, grow the tax base and support jobs across all major sectors of the state economy,” Black says.

Her report finds that the economic activity spurred by the increase investment could also create 5,000 jobs in Kansas, more than half of which would be jobs unrelated to construction.

ARTBA says the improvement in the state’s transportation network coming from the increase investment would include enhanced safety, lower operating costs, reduced congestion and an increase in both mobility and efficiency.

ARTBA says the annual $264 million investment would “help restore some of the recent cuts” to the Kansas highway program.

“The Kansas state legislature will have diverted about $3.5 billion from the state Highway Fund to the General Fund and other state agencies between FY 2011 and FY 2019 for non-transportation purposes,” ARTBA reports.

These diversions have had a significant market impact, Black says, delaying over $600 million in road projects because of a lack of funds and resulting in the loss of 3,000 construction jobs. If the funds were invested in highway and bridge projects, the construction work would spawn $7.8 billion in economic activity throughout all sectors of the economy and provide an additional $4 billion in state GSP, the association reports.

The full report is available at artba.org/economics/research/.