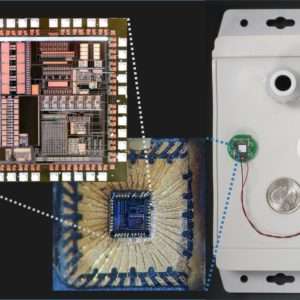 In an attempt to better fortell infrastructure failures, a team of engineers from Washington University in St. Louis is turning to smart, self-monitoring sensors.

According to a news release posted to Phys.org, the sensors, which can easily be embedded into infrastructure, will allow bridges, highways and buildings to self-check for damage in the event of an emergency.

“Right now, the maintenance of infrastructure has an enormous cost,” says Shantanu Chakrabartty, professor of electrical and systems engineering at the School of Engineering & Applied Science. “It’s hard to know how to prioritize. So if you have data, you can do condition-based maintenance. Depending on which part of a structure is vulnerable, you can assign manpower according to that.”

Chakrabartty’s team received a four-year, $1.1 million grant from the National Science Foundation (NSF) to develop a cloud-based platform for the sensors that would allow them to interface with a wireless network with the goal of creating smart civil infrastructure that can self-monitor and predict any failures after an earthquake or flood or terrorist attack, and also prioritize areas for emergency response. The sensors would potentially be produced at a low-cost that would allow large numbers to be embedded into concrete used to construct roads, bridges and buildings.

“These sensors are going to continuously monitor the health of the structure, and if something goes wrong, then it’s going to report that to the cloud,” Chakrabartty told the news agency. “You never lose the data. So if something happens, you can go back and see that a certain part of the structure experienced abnormal levels of strain, and then according to that, you can schedule your emergency response and your maintenance.”

“There is huge potential and benefit for sensors like these on structures beyond the Mackinac Bridge, and we’re excited these prototypes are being tested here,” Bob Sweeney, executive secretary of the Mackinac Bridge Authority, told the news agency. “We meticulously maintain and inspect the bridge each year, and sensors like these will complement our efforts, giving us even more information on the bridge’s condition to help keep it well-maintained and safe for many years to come.”

It is hoped that the Mackinac Bridge test will allow further refining of the entire system and will lead to widespread use.

“The technology we’ve developed, we can deploy it all over,” Xuan Silvia Zhang, assistant professor of electrical & systems engineering and a member on Chakrabartty’s team, told the news agency. “We are truly making an impact to make people’s lives safer.”