N. Carolina highway workers struck by vehicle on I-440 in Raleigh

Two North Carolina Department of Transportation (NCDOT) workers were struck by a vehicle while working on I-440 eastbound at the Capital Boulevard in Raleigh, according to a report by WRAL.

One worker, 44-year-old Darrick Bridges, was pinned between a parked truck and the vehicle. The other worker, 46-year-old Kelly Lewis, was thrown over a guardrail. Both were hospitalized.

“Safety of our employees and drivers is always a top priority and this incident highlights, again, the importance of work zone safety. We continue to urge drivers to remain alert and slow down when crews are working along the roadside or anytime an area is marked as a work zone,” NCDOT Secretary Nick Tennyson said in a written statement.

The driver of the vehicle, 44-year-old Angela Renee Roland, has been charged with violating a portion of North Carolina’s” move over” law that applies to an incident involving death or serious injury. 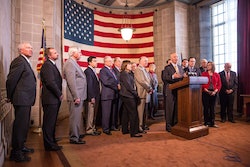