The completion of the $1.3 billion Bayonne Bridge “Raise the Roadway” project has been pushed back two years, with the renovated bridge now expected to be complete in 2019.

The Port Authority of New York and New Jersey announced October 1 that the delay in construction would mean the larger “post-Panamax” ships won’t be able to navigate into Newark Bay until 2017. The delay was blamed on a rough 2014-2015 winter, modifications to make sure the bridge could safely allow traffic during construction, complicated steel reinforcement activities and changes in the project plans in order to reduce overnight construction impact and to address some concerns from the community.

RELATED >> Crews building a “bridge within a bridge,” as part of $1B Bayonne Bridge clearance expansion

The project to raise the Bayonne Bridge began back in 2013 in order to raise the clearance to 215 feet, allowing larger modern ships to pass through the expanded Panama Canal. The project, a joint venture with Skanska Koch/Kiewit Infrastructure, is set to also make a safer roadway with 12-foot lanes, new shoulders, a median divider and a new 12-foot bicycle and pedestrian walkway.

“We are confident that we will complete the Bayonne Bridge’s ‘Raise the Roadway’ project within the revised timetable,” Skanska president and CEO Michael Cobelli said. “This has been a challenging project, but we have committed the resources to complete it successfully, with full awareness of how vitally important it is for the regional economy.”

The Port Authority said the project is about 50 percent complete and $380 million worth of construction is already in place, but some local officials in Bayonne aren’t happy with the announcement.

“This project was sold to the residents as a benefit for the City by the prior administration. Instead, it has been an ongoing struggle with the Port Authority to try and protect the residents of Bayonne,” Bayonne Mayor Jimmy Davis said. “Today’s announcement is just the latest chapter of the saga we have endured.” 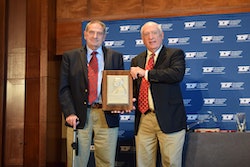 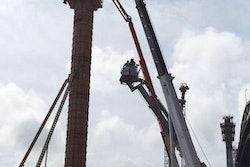