New data from the National Safety Council reveals that the number of motor vehicles deaths in America are up 14 percent through the first six months of 2015. That’s a jump of 18,630 deaths compared to 2014.

On top of that, injuries from traffic accidents are up by more than 30 percent compared to last year.

“As a safety professional, it’s not just disappointing but heartbreaking to see the numbers trending in the wrong direction,” NSC president Deborah Hersman told the Associated Press.

The upward trend is also incredibly costly. There was $152 billon in damage from vehicle accidents the first half of the year—a 24 percent bump from last year.

The NSC credited some of the increase on the fact that gas prices are a solid 30 percent lower this year than a year ago, in addition to a shrinking unemployment rate.

Hersman also said that the increase could be contributed to more and more distracted drivers using their cell phones and other devices.

“For many years people have said, ‘If distraction is such a big issue, why don’t we see an increase in fatal crash numbers?’ Well, we’re seeing increasing fatal crashes numbers, but I think it’s complicated to tease out what that is due to,” Hersman said.

In AGC video to Congress, contractors plead for a highway bill 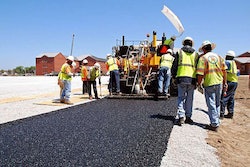