The House plans to vote today on a new short-term extension for transportation funding, extending solvency for the Highway Trust Fund (HTF) to October 29, and will leave on their August break this afternoon, essentially shirking any responsibility in taking up the Senate’s long-term funding option.

According to a report by The Hill, House Speaker John Boehner (R-Ohio) revealed this plan Tuesday morning, while stressing that he seeks a long-term bill that’s fully paid for.

“That has been the goal all year and that continues to be the goal,” he said. “We’ve been trying to do this for four years. It’s time to get it across the finish line.”

In response to this news, Senator Barbara Boxer (D-California) stressed on the Senate floor the House needs to forego their 5-week break.

“I’m urging the House to not go on their break and stay and work on this bill,” she said. “It’s been 10 years since the House had this long of a break. The House ought to finish its work. Take it (the Senate’s DRIVE Act), amend it, send it back . . . we’ll get it done. Do your work.”

Sen. Jim Inhofe (R-Oklahoma) argued the Senate needed to hurry their vote on the DRIVE Act in order to present it to the House before members left on break. “There is time to do this, and I’m personally going to make every effort,” he said.

Senator Mitch McConnell (R-Kentucky), the lead driver of the bill, continued highlighting the need for long-term funding that would only come from bipartisan efforts.

“It will give state and local governments the kind of stability they need to plan longer-term projects for America’s roads and bridges,” he said. “The important thing is that the Senate is now on the verge of passing a multi-year highway bill. If Republicans and Democrats resolve to keep working hard for the American people, we’ll get this done.”

The House had previously passed a transportation funding short-term extension that would have provided for the HTF through mid-December. 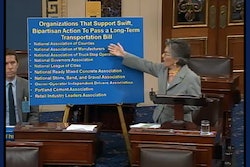