McConnell: “We’re not going to raise the gas tax”

McConnell also backed off of the idea that Congress would pass a long-term transportation bill and rejected the idea of a gas tax increase or tax reform to fund a roads bill, according to the Washington Post.

“There is considerable skepticism that you could pay for a bill of a six-year duration,” he said. “… We’re not going to raise the gas tax. With regard to the possibility of some kind of tax reform being a component of this, I’m skeptical.”

But McConnell wouldn’t say the length of a Highway Trust Fund extension that the Senate might consider next week. Senate Minority Leader Harry Reid (D-Nevada) said Democrats have tried to come up with bipartisan plan, but that the ball is now in the Republican court.

“It is up to Republicans to come up with something,” Reid said. “He has never, ever said a word in public about how he wants to fund a long-term highway bill.”

Hey, Congress: Keep it simple when it comes to highway funding 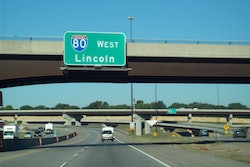