A failed pavement isn’t a welcome sight, particularly during our current uncertain transportation funding. So it’s increasingly important that road builders use methods that can allow roads to be built faster, stronger and be made to last longer.

Using geosynthetic materials is one way of prolonging pavement. These come in two primary forms: a geogrid, which locks in aggregates and materials in the sub-base and base levels, or a geotextile, which is used closer to the surface pavement level and channels away water as it seeps through the pavement.

These uses have helped cut down the overall cost of projects in which they’re used, have saved contractors labor and time and have extended the life of pavements by a couple of years by some estimates. But geosynthetics aren’t a panacea, especially if they are not used and installed properly. Above all, matching the material to the application and design is the primary way of ensuring a good result.

Marco Isola cautions that geogrids don’t work every time.  Isola, the regional technical project manager and paving and soil stabilization specialist for geosynthetics manufacturer Maccaferri, says it’s imperative that a geosynthetic is properly matched with the conditions in which it will be used, particularly in soil stabilization.

“There’s not one single product that always works for everything,” Isola says. “Depending on the type of soil, one type of material will work better than another type of material,” For example, if you’re in Florida, most of the cracks are top down cracking, developing from the top and going towards the bottom.  “So if you place the geogrid at the bottom, and the cracks develop at the top, what’s the point of using a geogrid?,” he asks.

Proper product use then comes back around to design. “It’s a topic that many universities are still studying,” Isola adds, saying that there’s disagreement at industry conferences and in written papers as to whether this type of reinforcement works. “Crack propagation is not fully understood,” he comments. “Most of the studies say it really works, but some studies say no, it doesn’t really work.”

Isola says the key layer in pavement isn’t the asphalt layer, but rather the base, much like the foundation of any structure. If there’s a solid, well-built base, then a pavement will last longer. That asphalt layer, he explains can always be milled or replaced, and small cracks on the face is simply minor maintenance. But doing a complete rehabilitation is going to cost much more in the long run, in materials and especially labor.

“If you have problems underneath, that’s going to be a serious problem,” he adds. “The big savings are in the base or sub-base, and that’s where geosynthetics perform very strong.”

Isola adds that many contractors he talks to say their goal is to give a road agencies a better and longer lasting pavement. “They say ‘if we can guarantee two or three years more compared to competitors, that’s a plus for us.’”

If there are pavement failures after using geosynthetics, it’s usually due to installation problems, Isola says. “If installed properly and designed properly, it’s something that really works. The material is what it is – it’s not rocket science. Neither is installing it rocket science.”

Brett Odgers, director of roadway reinforcement for TenCate, says that product confusion – with so many geosynthetics looking similar – can also lead to installation and performance problems because of contractor misuse.

“The confusion always is that almost all geosynthetics are black, so geogrids and geotextiles all look alike, so sometimes they don’t know,” he says. “There are a lot of different products and they all are made a little bit differently and have different strengths and weights. Some of the stronger products are typically used for reinforcement, others for erosion control.”

As a hypothetical example, Odgers describes a scenario in which an engineer may favor one product over another, and then design a project requiring reinforcement with that specific geosynthetic matched to the project. This makes perfect sense to the engineer, but that message might not make it to the contractor. “The contractor might not really understand the differences between this product and other products he’s used in the past. Sometimes you’ll see the contractor end up using a lesser product thinking it can work as a substitute. Then it doesn’t work properly.”

And why would a contractor not use the designated product? The common answer might be cost, but Odgers says it could just be convenience.  “Maybe it’s a small project and a contractor has something sitting in his yard left over from a past job and he says, ‘Oh I’ve got some geogrid or geotextile already, I’ll just use this.’”

But another scenario could just be inattention to the precise specifications needed. “An engineer will design the thickness of the aggregate, for instance, for the pavement, and it’s very specific on how much you can reduce that aggregate to the geosynthetic that they specify,” he says. “If you trade it out with something else, that’s when you’re going to see possible failures of your roadway.”

Contractors are becoming more interested in educating themselves about geosynthetics, Odgers says.  “The biggest thing is (for contractors) just to contact the different companies to make sure that whatever they’re using is going to meet the specification.”

And as the use of geosynthetics becomes more widespread, manufacturers are also producing better performing materials. “The old woven geotextiles came from the carpet backing industry,” Odgers says. “They really weren’t designed for roadways. So now we’re designing products around those applications so that you get better performance – longer lasting and cheaper roads.” 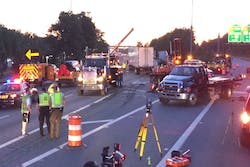 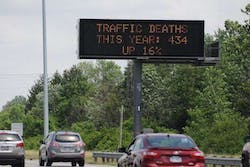