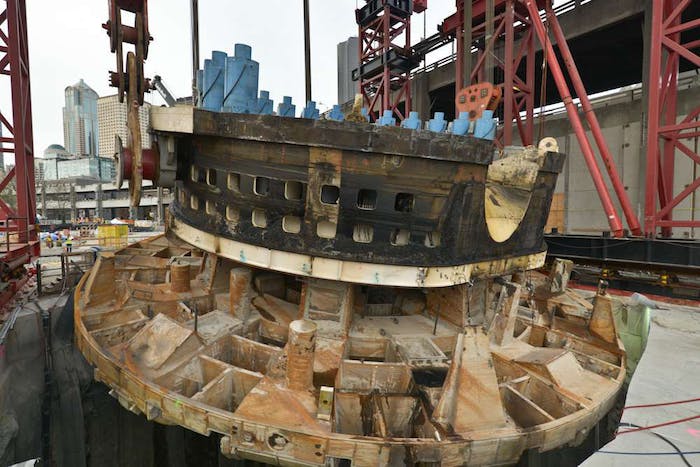 After a year of slumber and almost a month after chewing her way into a 12-story repair pit, Big Bertha, the world’s largest tunnel-boring machine, is finally under repair in Seattle.

Crews worked for the better part of March to disassemble the machine’s front end before lifting the machine’s cutterhead and body shield panels—a combined 2,000 tons—to the surface for necessary repairs.

The gallery above details the process of disassembling the front end and lifting the four pieces to the surface.

According to a report from the Seattle Times, the lifting process was completed around 10:30 a.m. Tuesday. The lift was done by Mammoet, a Dutch lift company, through a plan devised in tandem with Seattle Tunnel Partners, the lead contractor on the job, and Hitachi, Bertha’s manufacturer.

The machine is nearly two years behind schedule in digging Seattle’s new State Route 99 tunnel due to a long list of setbacks. The massive machine went down only one-tenth of the way through digging the 1.7-mile tunnel which will carry a double-deck highway and replace the Alaskan Way Viaduct.

Water and sand clogging her cutterhead openings brought the machine to a halt in January 2014, penetrating seven rubber seals meant to protect the main bearing. In repairing the machine, crews will install 216 steel ribs and plates that will add 86 tons of reinforcement to the 7,000-ton machine’s drive block and cutter drive. The Times reports these reinforcement repairs have already begun.

Crews are now aiming at resuming drilling in August. 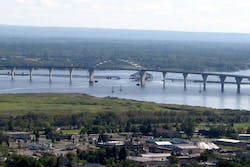 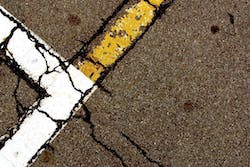