FLEET PROFILE: The top roadbuilding equipment and brands financed by highway contractors in the last 5 years

What have contractors who are engaged primarily in roadbuilding been adding to their equipment fleets in the past five years? To get a better picture of this, we zeroed in on a segment of contractors defined both by their market and their buying activity, and took a deeper dive into what they have financed.

For this study, we looked at financed equipment tracked by Equipment Data Associates from 2010 to 2014. We further sorted this data by the most active financed buying segment of roadbuilding contractors – those who have financed more than 40 machines in the past five years. Although financed machines do not represent the totality of the market, since contractors can also purchase equipment with cash or a letter of credit, financed machines can represent 40 to 75 percent of the purchased market depending on the type of machine.

The 124 contractors we included in this segment were defined by industry codes SIC 1611 Highway and Street Construction and/or NAICS 237310 Highway, Street and Bridge Construction, and/or were determined by editorial judgment to be primarily engaged in roadbuilding activities. We divided them into three size groups, determined by annual revenues reported by Dun & Bradstreet and other industry sources:

With our larger contractor slice, the trend of new financed purchases over used purchases has been significant since 2012, and in 2014, new purchases were 64 percent above the number of used equipment purchases.

We’ll look first at the types of machines typically identified as paving-specific, such as pavers, compactors and milling machines. The top financed equipment types remained consistent between size groups.

Looking at all types of equipment, not just those specific to roadbuilding, the size of roadbuilder in our segment did create some significant differences in the top types of new financed equipment and trucks purchased. Double-drum compactors, for example, were the third largest type of equipment purchased by our large size segment, but only appeared eighth on the list for medium size contractors and not at all for smaller contractors. And backhoes only appeared on the smaller size contractor top list.

Articulated trucks – from three different manufacturers – appeared on the top three model list of all contractor sizes in our segment, the only type of machine to do so.

Although the manufacturers remain basically the same, there are differences in the top brands chosen in the new self-propelled equipment and trucks financed on a per unit basis between small, medium and large roadbuilders in our segment: 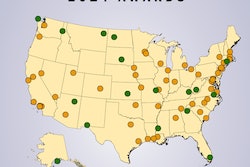