Raising the ante for airport terrrorists

America now has a new weapon in the fight against terrorists who might target our airports. Poker.

The art  and science of poker playing has led better security at Pittsburgh International Airport. According to the Pittsburgh Post-Gazette a couple of cool scientists who approached the game as a problem solving exercise have done us all a favor. Basically a terrorist approaching the airport will have to bluff while being uncertain if airport staff are bluffing. And in the end our aireport players hold all the cards.

Check out this story and see if you would feel safer in your area if your airport did what the Pittsburgh folks did. I’m pretty certain I would. And I’m a lousy poker player. 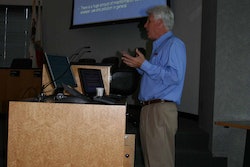