That mill-and-fill job up for bid may seem the exact boost your company needs right now. 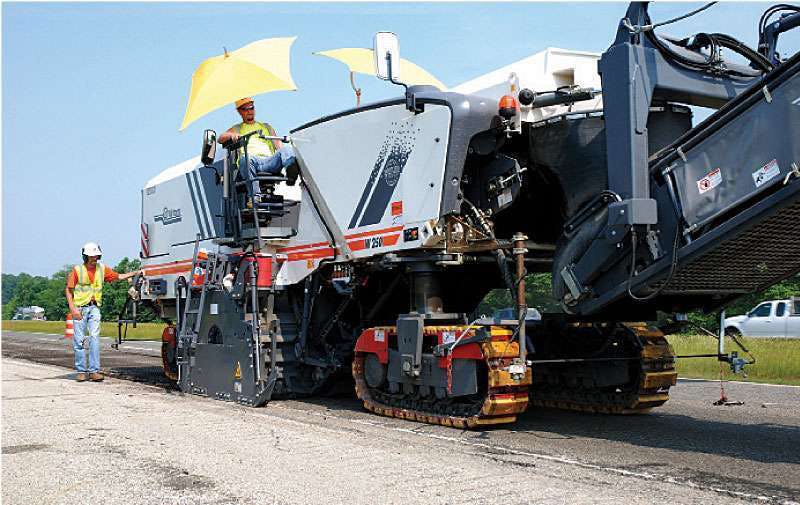 The biggest benefit for milling contractors today is flexibility of machine application, says Wirtgen America Senior Vice President Jeff Wiley. “Every job is different,” he says, “and the operator today has the opportunity to select the type of grade control system he wants to use.”

It may very well be, says Terex Roadbuilding’s John West, but there’s work to do before – or even if – you submit.

“Priority number one for the milling contractor,” he says, “you have to know what that aggregate is, in order to be able to envision what it’s going to cost you in carbide consumables and what you can project your daily production numbers to be.” A milling machine has 200-250 carbide tools, valued at about $4 apiece, he explains. “Now, are you changing those hourly or are you changing them daily? That’s a $1,000 to $10,000 variance daily. You can bid yourself right out of business here, just depending on what the severity of the aggregate is. You want to know what you’re up against before you get up against it.

“Normally, you’ll spend more on carbide tools in three years of ownership than you pay for the machine itself. It’s nothing for a contractor to spend $200,000 or $250,000 seasonally on a milling machine, just on carbide tools alone. If you can decrease that annual cost by 10 to 15 percent, that’s a huge number, particularly if you run a fleet of 10, 12 or 15 machines.”

On the milling side, says West, also to be considered before bidding are requirements for smoothness and pattern increasingly obligated by agencies to be tested and approved as prerequisites for project completion and contractor payment.

This will lead directly to the contractor’s cost-variable cutter pattern requirement, determined by the number of carbide teeth placed on the milling machine’s mandrel. Roadtec’s Baker explains from coarse to fine:

Excavating Pattern provides coarse 3/4-inch spacing, allowing a significant increase in production. This technique of “strip milling” is used where full-depth removal, up to 12 inches, is desired.

Traditional Pattern, with grooves spaced 5/8th of an inch apart, is the industry standard for asphalt overlay. Suitable for milling up to 8 inches in depth, it allows production with an acceptable temporary driving surface.

Profiling Pattern, described as a fine-textured version of the traditional pattern, requires more teeth on the drum for reduced spacing of 3/8th of an inch. Best used on cuts no deeper than 2 inches, the result is a surface suitable for driving, with or without fresh asphalt overlay.

And Micro-Milling, sometimes referred to as “carbide grinding,” is performed prior to a seal coat to re-establish profile, grade and skid-resistance or to “de-slick” flushed pavements. The typical pattern of 1/5th of an inch is best used on thin cuts of no more than an inch deep.

A smooth milled surface with the correct profile provides two major benefits for paving contractors, Caterpillar Paving Products reported in a recent New Hampshire and Vermont case study: the crew would be able to pave both lifts using grade control on both sides of the paver, thus avoiding smoothness-losing profile built with slope control; and total smoothness improvement would not confined to just the leveling and wear courses.

“Milling contractors are entering an era now where the word ‘milling’ needs to be thought more of as ‘profiling,’” says West, Terex Roadbuilding product support specialist. “Regardless, you have to have weight, horsepower and grade control in order to maintain a productive balance. You just can’t take an undersized machine, place it on an oversized task, and expect a happy result.”

So, does this mean bigger is better? That depends on where you’re working, says West.

“Some jurisdictions, if you’re going to do mill-and-fill, will not accept half-lane cuts. You either cut the entire lane or you’re not going to not get the project.” This, he says, is often an agency’s reaction to past problems with contractors not being able to maintain cross-slope. One match between two lanes is easier to hold than mid-lane breaks.

Having said that, “there’s still merit” for a half-lane machine working on roadways squeezed between the need for rehab and the demand to keep traffic flowing, says West. “The motoring public does not have a problem with us giving them a smooth, new surface to drive on. They just don’t want you to get in their way while you do it,” he says. “If we ever find that magic formula to do both at once, we’re all going to be very rich and famous people.

“They’re asking us to do more work in less time in less space, basically.

An answer, among advice offered by roadbuilding equipment manufacturer Wirtgen America, lies in the contractor’s use of manpower. “It’s important that an owner keep his crew with a machine as long as he can,” recommends Jeff Wiley, senior vice president. “It’s not a good idea to send the crew back to the union hall at the end of the year, and get a new operator and crew the next year that has to be trained all over again on that machine. When crews stay on a machine month after month, year after year, they understand it; they know what to do on the machine to keep it up and running.

“The best crews are those that have been with the machine for the life of the machine.”

This approach works particularly well today, when cash-tightened agencies are increasingly looking to “near-term remedies” such as mill-and-fill, says West, closing in on 30 years with Terex Roadbuilding and its predecessor companies. “Our Rotomill did for the milling industry in the 1970s what our RS500 did for the reclamation/stabilization world in the late ‘80s,” he says. “It revolutionized it into a full-blown subcontractor-oriented marketplace.”

“The highway system that we have in place today is second to none. In fact, over the last two decades, I’ve watched industry have to incorporate rumble strips – which we did not use to do routinely – because we’re falling asleep at the wheel because the roads are so smooth. We’re putting rumble strips by mandate out there to wake you back up.”

Echoing the words of its fellow milling machine manufacturers, Atlas Copco’s Dynapac offers tips to contractors to get the most out of their planers. According to Tom Chastain, product manager, pavers/planers:

Doing a visual walk-around allows a person to see areas of concern, such as loose or damaged tracks, worn or torn belts, and hydraulic leaks.

Proper daily drum maintenance should be done either before or at the end of the machine’s working shift. Specific attention should be paid for inspection and replacement of milling teeth and holders. Depending on the cutting system, holders may need to be tightened down according to the manufacturer’s specifications.

Washing of the machine is vital. This not only allows the machine to run more smoothly, but this can also prevent premature wear. A clean machine also allows potential issues to be more visible while doing the walk-around inspection.

Daily lubricating of all necessary components prolongs the life of the components and prevents premature failures. Use manufacturer-recommended lubricants, or at least lubricants that have been approved by the manufacturer and/or vendor.

Understanding and communication amongst the crew is critical. The most vital part of a milling operation is a quality crew. If the crew understands the job requirements and has done the proper maintenance on the milling machine itself, the program should go according to plan . . .

Well, adds Chastain, as much as it can, that is: Job scenarios do change seemingly every minute. 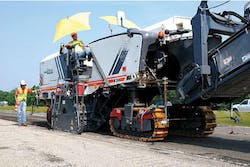