The Avery Dennison Minimum Retroreflectivity Compliance Kit enables agency officials and road sign fabricators to evaluate if an existing sign meets new federally established standards for retroreflectivity. The visual assessment method using the kit is fully compliant with the Federal Highway Administration’s Manual on Uniform Traffic Control Devices (MUTCD) recommendations for sign evaluation. The calibration sign standards come in all required colors with retroreflectivity levels engineered to match the values specified in MUTCD. In accordance with the 2009 edition of MUTCD, state and municipalities have until January 22, 2012, to select and begin employing an assessment or management method to maintain traffic sign retroreflectivity at or above established minimums. By January 15, 2015, they must replace regulatory, warning and post-mounted guide signs that fail to meet established minimums. By January 22, 2018, overhead guide and street name signs that fail to meet established minimums must be replaced.

Faddis Concrete Products makes precast sound-absorptive AcoustaCrete, low-weight sound-absorptive AcoustAL aluminum for bridges, and transparent AcoustaClear acrylic walls for preserving the view while blocking the noise from the road. The ShoreWall system is a combination cantilevered retaining wall and noise barrier, and the off-set AngleWall is constructed on shallow foundations. 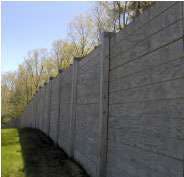 Plywall from Hoover Treated Wood Products is a pre-engineered, ASTM-tested, preservative-treated wood noise barrier that is said to provide better or comparable acoustic performance to concrete, masonry and alternatives. It can support heights up to 30 feet and can supply noise barriers capable of withstanding wind loads up to 60 psf. Prefabricated panels are 8, 12, or 16 feet wide, covered on both sides with preservative treated exterior-rated 4-by-8-foot Texture 1-11 plywood. The panels are typically 2-3/4 inches thick and are secured to the posts within channels created by pressure-treated 4-by-4-inch cleats, which are spiked or lagged parallel to the posts. 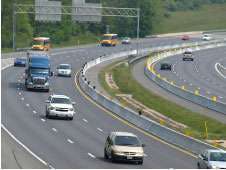 Hill & Smith’s Zoneguard Steel Barrier System is tested to NCHRP 350 and MASH crash test standards. Its ability to haul 750 LF of barrier on one truckload significantly reduces freight costs and accelerates installation and relocation, according to the company, making the barrier system a cost-effective alternative to traditional concrete barrier. Its sister product, the Edgerail Aluminum Bridge Rail, is a modular system that weighs 19 pounds per foot, making it one of the lightest TL-4 bridge rail systems in the world. The bridge rail’s sleek design is aesthetically pleasing and provides unobstructed views with a modern composition.

PreView Radar is a pulsed-radar blind spot system that has been engineered to work in the extreme conditions common in the construction industry. If the radar sensor detects an object outside of the operator’s view, an active warning alert sounds in the cab, giving the driver time to react and prevent an accident. As the equipment gets closer to the object, the alert increases in speed, while more LEDs illuminate.

Rhythm Engineering’s InSync real-time adaptive traffic control system uses artificial intelligence to optimize traffic signals at intersections and coordinate signals along arterial corridors to reduce traffic. By enabling traffic signals to instantly adapt to actual traffic demand as it approaches, the system is proven to reduce traffic stops by 60-90 percent, reduce travel time by up to 50 percent, and reduce fuel consumption and emissions by 20-30 percent. These improvements create significant economic savings for cities and improve overall quality of life for motorists.

GlasGrid TF from Tensar International’s GlasGrid Pavement Reinforcement System is said to strengthen pavement to promote a longer service life while offering a faster installation to save on labor, time and material costs. The product features a pre-installed layer of elastomeric polymer tack film that bonds with hot-mix asphalt overlays, to eliminate curing time as it protects against reflective cracking. 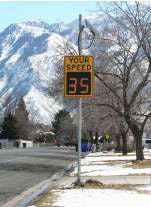 Traffic Logix’s SafePace 400, 500 and 600 radar speed signs incorporate the features and options that cities need most. The SafePace 400 is a driver feedback sign with a static “Your Speed” message. The SafePace 500 is a white variable-speed-limit sign ideal for school or work zone locations where speed limits fluctuate. The SafePace 600 is a dynamic speed sign, offering two rows of completely customizable text, including animated text or graphics. All three of the new signs in the SafePace series are Manual on Uniform Traffic Control Devices (MUTCD)-compliant with large 15-inch LED digits.

Sound Fighter Systems enlisted the services of Architectural Testing to conduct dynamic and static wind load testing on its LSE Absorptive Noise Barrier System at its Texas testing facilities. For the dynamic test, a Levitator V-8 wind machine was used to generate controlled wind speeds on a sample LSE Barrier section. Wind speeds of 35, 70, 90, 110, 120 and 130 mph were sustained for multiple-minute increments, with no visible damage to the LSE System. For the static test, negative pressure was applied to a sealed-off LSE Barrier section using a Dwyer 616-D6 pressure transducer. The barrier section was subjected to negative static pressures loads beginning at 20 psf and increasing in increments of 5 psf. Pressure was maintained for 30-second increments at each level. The LSE Barrier withstood a maximum static pressure of 55 psf without failure. 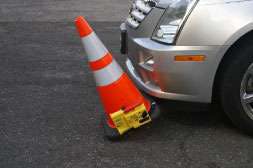 The SonoBlaster Work Zone Safety Alarm from Transpo is an impact-activated safety device that warns work crews and errant vehicle drivers simultaneously to help prevent crashes and injuries in work zones. The NCHRP 350 accepted device mounts on barricades, cones, drums, delineators, A-frames and other barriers. Upon impact, the SonoBlaster’s built-in CO2 powered horn blasts at 125 dB to signal workers that their protective zone has been violated, giving them critical reaction time to move out of harm’s way. 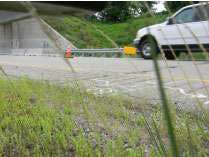 To get regular updates on the latest traffic and safety products and news, sign up for Better Roads’ monthly Traffic Safety News and Products e-newsletter at betterroads.com/newsletter-subscription or scan this tag with your smartphone. 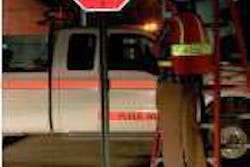 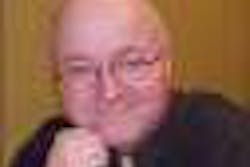 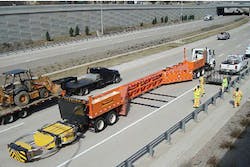 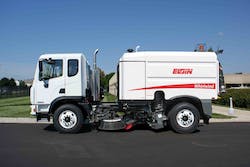