Lend Me Your Earmarks 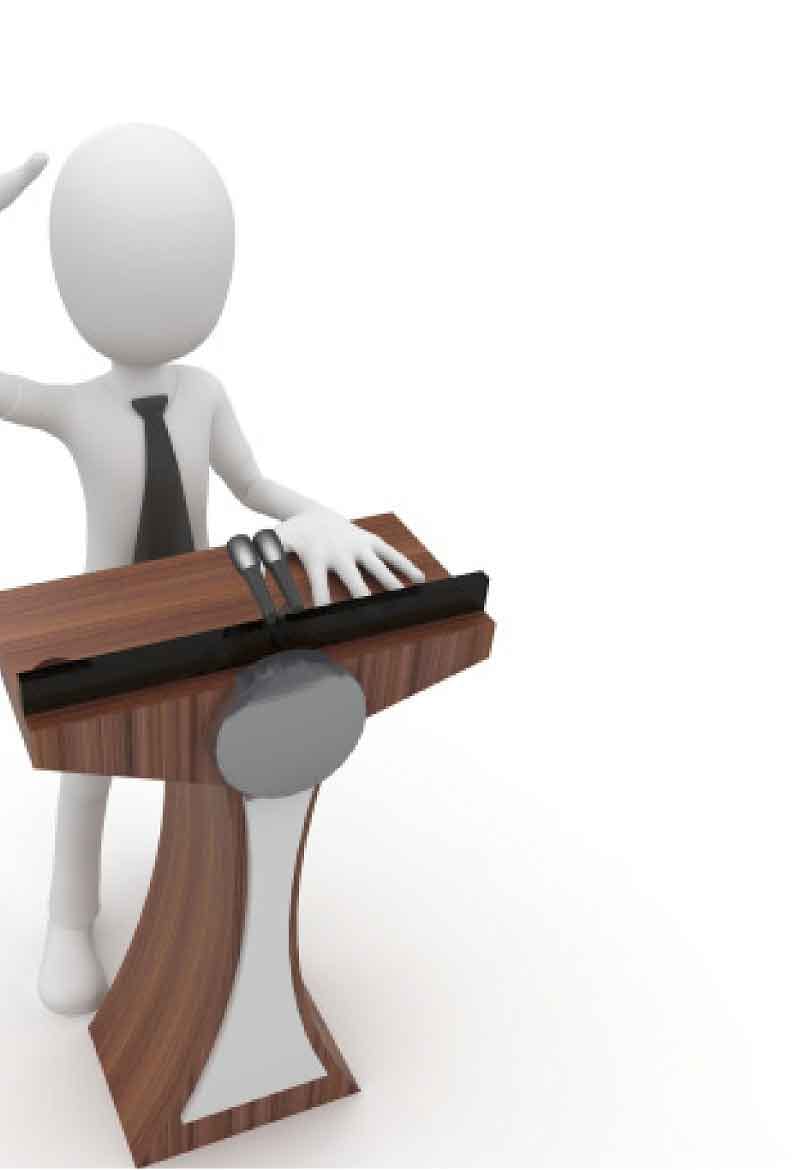 A vast amount of transportation funding sitting around doing nothing may be put back into action if two U.S. senators can clear some very big hurdles.

Moves are being made in Washington to free up billions in transportation “earmark” funds, especially those commonly called “orphan earmarks.”

Pennsylvania Sen. Bob Casey, a Democrat, has introduced two bills aimed at using federal money allocated to highway projects that remains unspent . . . and idle. And Sen. Claire McCaskill [D-Mo] wants not only orphan earmark money back, but an end to all transportation earmarks.

“This legislation will ensure that funding already directed toward highway projects is put to good use, improving our roads and bridges, and creating more construction jobs,” says Casey.

Casey cites reports that indicate that almost one in three dollars earmarked for highway projects since 1991 remain unspent, totaling $13 billion nationwide and $392 million in his native Pennsylvania. McCaskill assesses Missouri’s loss over that time at $101 million. Casey’s two bills:

The Redistribution of Unspent Earmarks Act will require any earmarks that are more than three years old and not obligated to a specific project to be returned to the state transportation department with jurisdiction over the project, allowing the money to be spent on other federally-approved projects.

The Use It or Lose It Act will require congressionally- directed funding from the Highway Trust Fund to be obligated for a project no later than three years after the funds were first made available. If funds are not obligated in that time frame, they will be released to the state transportation department, which will then be able to direct it toward other federally-approved transportation projects in that state.

But changing the way earmarks operate will always be an uphill battle in Washington, and this attempt is no different. Former Secretary of Transportation Mary Peters went on record as saying she expects Casey’s proposal to fail, in part because congressmen suspect states would simply sit on their hands for three years until the money became theirs with no Washington politician’s strings attached.

But in the Casey camp is Senator McCaskill, a long-time earmark reform advocate, who has written to Secretary of Transportation Ray LaHood asking him to investigate how so much funding is sitting unused and essentially inaccessible in the no man’s land of orphaned earmarks. These idle funds prevent states from accessing their share of highway funding by skewing the funding formula used in Washington. And they remain on ice, unable to be used for anything other than their original designation.

McCaskill went a step further: She asked LaHood to work toward ending “the process of earmarking in transportation bills and instead allocate money for projects solely through, merit and need-based formula funding.”

According to McCaskill, members of Congress earmarking pet projects do not completely understand nor correctly assess the specific needs and specs of those projects, so that when earmarks arrive in a state or region, local authorities often have a difficult time actually using the money. In fact, simple paperwork mistakes are a considerable roadblock in many cases.

“Far more egregious,” McCaskill says in her letter to LaHood, “is that these orphan earmarks also count against a state’s share of federal highway funds, resulting in state departments of transportation losing that money.”

McCaskill, who says she has never requested an earmark while in office, writes that, “Since joining the Senate in 2007, I have worked to put an end to the practice of earmarking because I do not believe that members of Congress know better than those in their state how best to utilize federal funding, and that earmarks further eliminate funding that could be made available through competition or formula. The recent reports of these orphan earmarks confirm that this is most certainly the case when it comes to transportation funding.”

A whopping 11 percent of the funds in the most recent highway bill (that’s $22 billion) were earmarks, McCaskill points out to LaHood, and over the 20 years the total for earmarks has been pegged at around $7.5 billion.

Writing for the Heritage Foundation, Ronald Utt, Ph.D., says that many members of Congress facing changes to earmark practices “are unenthusiastic about the change or even hostile to it. They believe that earmarking is an integral and valuable part of their duties.”

A common definition of earmarks, says Utt, is “a legislatively mandated expenditure that specifies the location or company and the project to receive the funding.” 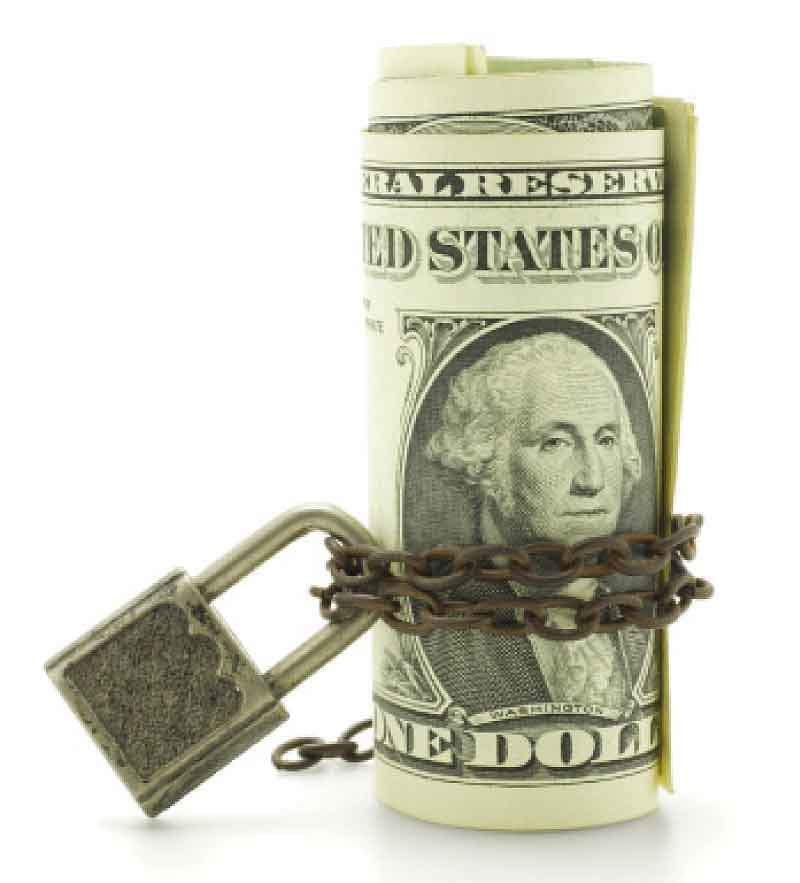 The antidote to traffic congestion and decaying infrastructure is not more government programs. The answer, says the author of a new book, is to turn motorists into consumers of American roads . . . not just users of them.

Only the increased use of public-private partnerships (PPPs or P3) can repair our roadways and boost our economy, he says.

And that, the writer concedes, means toll roads. But on the flip side, he says, it also takes politics out of the equation.

The Road to Renewal: Private investment in U.S. transportation infrastructure (The AEI Press, 2011) is written by R. Richard Geddes, an associate professor of policy analysis and management at Cornell University, who recently served as a commissioner on the National Surface Transportation Policy and Revenue Study Commission. Geddes is also an adjunct scholar at the American Enterprise Institute that published the book.

Former U.S. Secretary of Transportation Mary Peters calls the book “a must-read for those of us who seek to provide funding for America’s transportation system now and into the future.” And Robert Poole, director of transportation policy at the Reason Foundation, says it is “the best and most insightful book yet on the role that private investment can and should play in transportation infrastructure.”

In a P3, it is private investors (not taxpayers) who bear the costs and risks, argues Geddes, giving them strong incentives to complete projects on time and on budget, and introducing sharp, focused incentives necessary to operate, upgrade and expand key facilities. “Because investors stand to profit from P3s, it’s in their interest to attract motorists through efficient operation, rigorous safety standards and fast, thorough repairs — a customer service ethic that government-operated systems lack.”

P3s also make way for innovative pricing that can reduce congestion and decrease emissions, says Geddes. He also argues that they would bring private capital and new jobs to communities direly in need of both. Private funds can be used to build new highways from scratch, or be employed to take over existing roads, using two similar but different payback scenarios. And once privatized and commoditized, roads could become investment opportunities for such entities as pension funds, bringing even more private capital to bear on infrastructure.

“Most importantly, P3s turn motorists into consumers instead of merely users of America’s roadways. As consumers, motorists have the power to demand the services they need.” Presumably the argument also holds good for the trucking companies that deliver most of America’s freight. Citizens, Geddes maintains, own the vast majority of America’s roads “and deserve a competitive return on their investment.”

While existing P3s have shown that they can increase competition in such areas as facility design and construction, more competitive benefits would come in areas such as facility finance, maintenance, expansion and operation with the expansion of P3s, according to Geddes. To the relatively common claim that P3s decrease public control over critical transportation assets, Geddes argues that properly structured, they can improve public control and oversight, compared to roads that are publicly owned and operated.

“Some observers also assume that P3s can only be used on facilities that generate enough toll revenue to make them profitable. This is false,” Geddes writes. “Even if a facility loses money, competitive bidding through P3s ensures that the public pays the least possible subsidy required to keep it in operation – an approach that has been used in other countries. Noting that “much of America’s federal transportation spending today is directed by political calculations rather than by benefits to motorists and taxpayers,” Geddes argues that private money will go to high-volume needs because that’s where the return is. This approach would surely worry rural politicians and others who have few roads to attract investors, although the author’s “least possible subsidy model” may work in these cases. It would also massively upset the ubiquitous earmarkers in Congress who would rather have the money arrive in a grateful community with their name emblazoned on the bag.

Earmarks have, of course, gone over the top in transportation spending. Only 10 earmarked projects appeared in the 1982 highway bill, but 6,371 of them were in the 2005 bill. For earmark opponents, there is a lot of evidence that they do more harm than good; for example, providing only part of a project’s costs and forcing state and local agencies to find the rest of the money somewhere, being used for nonpriority projects and counting against Federal funds. They also often go unspent for years, creating even more headaches for funding (see story page 62).

Private investing is one of three major changes Geddes suggests be made in approaching transportation infrastructure financing. The other two are charging road users based on how much they use roads and congestion or value-pricing, which hikes road use charges during periods of peak demand.

Which option(s) may be used to find more funds?

We know the purchasing power of the Highway Trust Fund is dropping. We know the money flowing into it from fuel taxes is woefully inadequate. What we don’t know with any degree of certainty, or detail, is what other sources of revenue could effectively boost the HTF coffers back to a level where it can adequately fund bridge and highway building, maintenance and repair across the country.

A new report goes into detail on a wide range of options and puts numbers to them to try to stimulate pre-reauthorization discussion (see AASHTO chart at bottom). A new surface transportation bill with only existing income options will not provide enough funds to even keep our transportation system in the shape it’s in now.

The recent Forum on Funding and Financing Solutions for Surface Transportation in the Coming Decade Conference focused on:

near- and medium-terms funding options for the Federal surface transportation programs, current and potential future applications of federal financing tools, and funding and financing initiatives that are working at state or local levels. 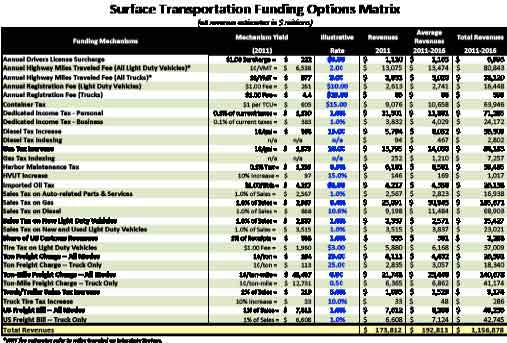 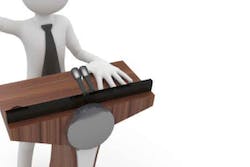 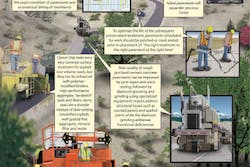 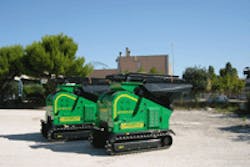