It’s not all doom and gloom anymore. We all know the U.S. economy has been in the dumps, and it’s been particularly bad for the construction industry.

No one can quite figure out when it will get a whole lot better (we all hope soon!).

But despite continued uncertainty about the prospects of both the U.S. and global economies, the majority of U.S. industrial manufacturers remain positive regarding the overall revenue outlook for the next 12 months, according to the Q3 2012 Manufacturing Barometer released Oct. 25 by PwC US.

According to the report:

Eighty-two percent of respondents forecast revenue growth at their own companies for the next 12 months, and only nine percent expect negative results, with many of the respondents planning to hire additional employees, as well as invest in new products and research and development.  However, the projected average growth rate for own-company revenue over the next 12 months dropped to 4.6 percent from 5.6 percent in the second quarter, and below last year’s five percent estimate.

“While the majority of U.S. industrial manufacturers continue to forecast revenue growth at their companies over the next 12 months, overall sentiment among those surveyed remains cautious toward the direction of both the U.S. and global economies,” said Bobby Bono, U.S. industrial manufacturing leader for PwC, said in a written statement about the report.  “Margins remained flat during the third quarter and inventories rose, while concerns rose regarding a lack of demand as a barrier to growth. There was also a notable pullback in capital and operational spending plans for overseas expansion. These factors may point to the continued uncertain global climate and a more guarded approach being taken by industrial manufacturers.”

“In addition to the uncertainty U.S. industrial manufacturers are facing, they also identified the top three barriers to growth during the next 12 months. Lack of demand rose sharply to 67 percent in the third quarter of 2012, from 48 percent in the previous quarter, followed by legislative/regulatory pressure at 44 percent and oil/energy prices at 33 percent,” said Bono in a written statement about the report.

Despite the cautious outlook, more U.S. industrial manufacturing panelists are planning net new hiring over the next 12 months, at 47 percent, up five points from the previous quarter.  Only seven percent plan to reduce the number of full-time equivalent employees. The most sought-after employees are expected to be professionals/technicians (33 percent), production workers (25 percent) and skilled labor (21 percent).

With regard to spending, 49 percent of respondents plan major capital investments over the next 12 months, slightly below last quarter and a year ago (55 percent). However, their mean investment as a percentage of total sales at 5.8 percent was higher than the second quarter and similar to the third quarter of 2011. The survey also projects a rise in operational spending, with 83 percent planning increased spending in the next 12 months, focused on new products or service introductions (46 percent) and research & development (46 percent).

Plans for M&A activity over the next 12 months remained steady at 37 percent, with 35 percent planning to purchase another business and 12 percent planning a sale of part of their business.  The divestiture indication reached the highest level since the fourth quarter of 2007.

Gross margins remained flat in the third quarter, with 26 percent indicating increased gross margins and 23 percent saying they were lower, while 51 percent said they were the same as the previous quarter. Costs and prices were moderately higher with 30 percent of respondents reporting higher costs and 14 percent reporting lower costs, for a net plus 16 percentage points higher, one point above the second quarter’s 15 percent. On the price side, 28 percent raised prices (up 10 points) but 18 percent lowered them (up 13 points), for a net plus 10 percentage points, off three points from the second quarter.

“The considerable drop in global expansion plans, combined with an uptick in potential divestiture activity, further highlights the conservative stance being taken by management teams in the industrial manufacturing sector,” continued Bono. “U.S. industrial manufacturers are waiting for clarity on the direction of the economy and geopolitical picture, and as the outlook becomes clearer, we believe companies will step-up targeted spending to support new growth initiatives, particularly given tightening margins associated with current revenue streams.” 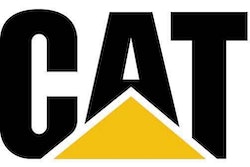 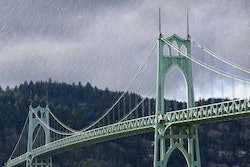 Bridges are singing in the rain 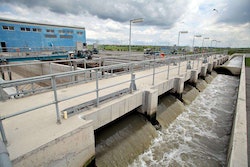