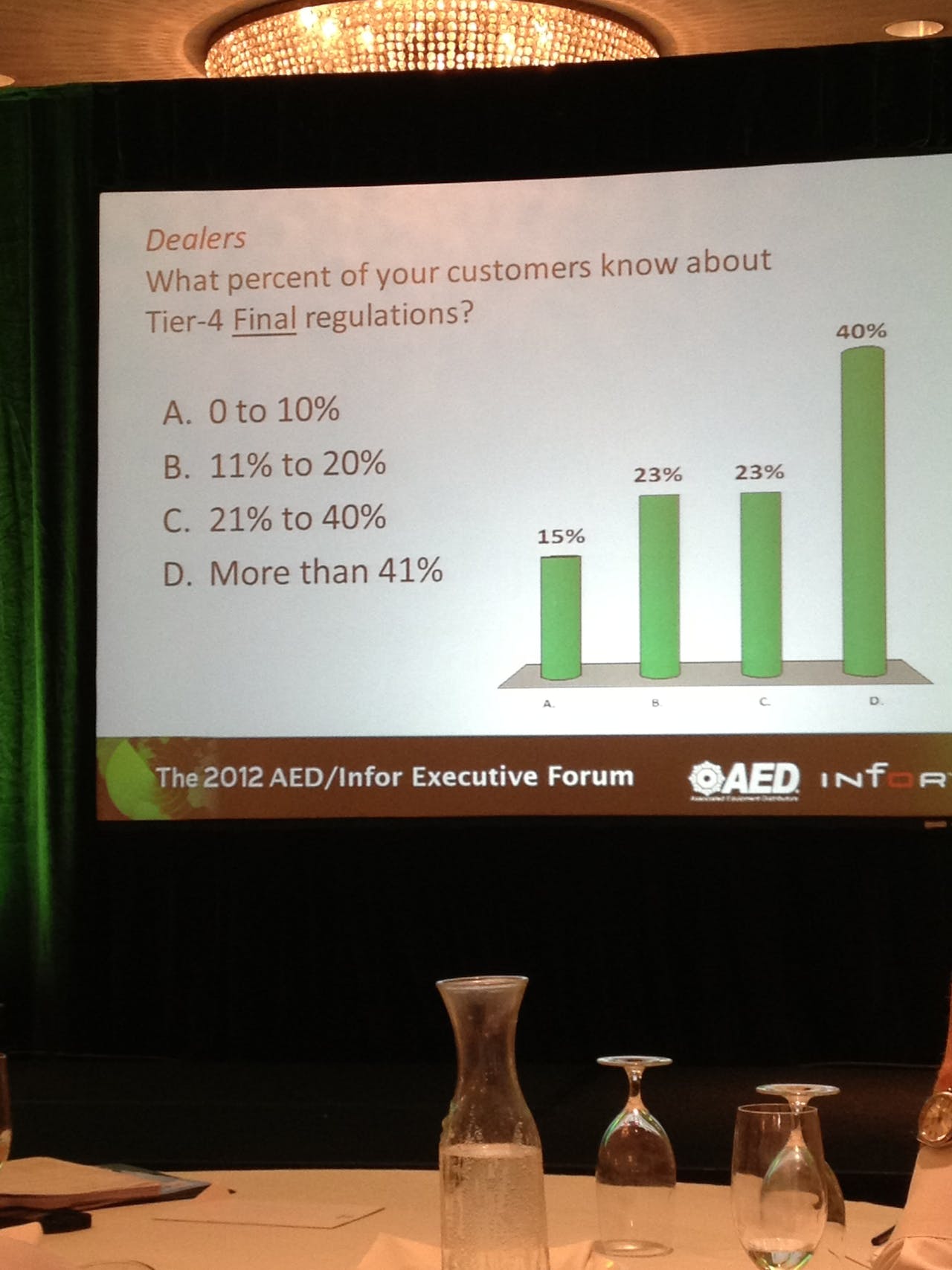 There has been much ado about the Tier 4 final regulations that are coming down coming the pike and what it is going to mean for the used construction equipment market.  With Tier 4 interim standards currently in effect, there are already some “unintended consequences of doing the right thing for the environment,” quipped Frank Manfredi, president of Frank Manfredi & Associates, as he moderated the “Tier 4 and the Future of Equipment Markets” panel discussion at the 2012 Associated Equipment Distributors (AED)/Infor Executive Forum at the Rosement Hilton/Chicago O’Hare hotel on Sept. 6.

Unintended consequences may mean “quarantine markets,” with the U.S. possibly isolating itself because of its regulations, Manfredi pointed out. During research he has been conducting on the possible effects of Tier 4 engines on the used equipment market, Manfredi said it occurred to him that Tier 4 machines could not be operated in less-developed countries because low-sulfer diesel (LSD) is not available.

This is significant because it could severely segment and restrict where equipment is able to be sold – as well as its resale value.

In a real-time poll of the audience as to whether Tier 4 used equipment will be saleable in Latin America, Africa and the Middle East, 32.1 percent of the audience said, “Yes,” while 67.9 percent said, “No.”

The United States mandated the use of LSD in 2006, which was a huge change for equipment manufacturers, Manfredi notes. All new diesel applications as of 2007 were required to use LSD. “We believe that few, if any of the countries in Latin America and Africa – and other less-developed countries – don’t have access [to low-sulfur diesel fuel]. These engines require more expensive fuel that is not available in traditional export markets.”

However, panelist Peter Blake, CEO for Ritchie Bros. Auctioneers, points out free markets will figure out a way to make it work. “If there is a demand, people will figure out how to get the fuel there. Part of the answer is the availability of service. If you get new, complicated engines, but move into Latin America where serviceability may not be available, that will impact the saleability of the engines. (For a video of Blake discussing this topic during the panel discussion, click here.

This concern about resale could just be like frenzy about Y2K. “Everyone was freaking out about it, but it didn’t turn out to be a huge issue,” Blake said. “But who knows?”

Clean air has been a concern of the U.S. government since 1955, he said. The Clean Air Act of 1970 included motor vehicles, and the Clean Air Act of 1990 established air-quality standards for all on-highway vehicles and off-road equipment. Tier 4 Interim became effective Jan. 1, 2012, and regulations have continually become more stringent. “Initial updates have challenged engine manufacturers as the U.S. EPA [Environmental Protection Agency] regulations have become stronger and stricter in tiers over time.”

These regulations have progressed from what was once a simple engine tune-up now to an elaborate engine system that is both much more costly and complex.

Blake says it’s hard to determine yet the effect of Tier 4 on the used equipment market. “Most of what is coming to auction today is below Tier 4,” he said. “We’ve sold some Tier 4 in Australia, and it has been well received.”

However, Tier 3 construction equipment has seen an increase in value from the past couple of years. Blake credits it to the increased demand for used equipment during the last 18 months rather than the Tier 4 issues.

A big part of Tier 4 is also education and compliance. Neal R. Winberg, director of equipment purchasing and sales at Kiewit Corp., says his company relies heavily on dealers and manufacturers “to guide us through things.” He is concerned about the price increases on Tier 4 equipment and compliance. Winberg called the additional costs associated with Tier 4 equipment a “right jab,” and “the left hook is what it will be on the back end” – a potential decrease in resale value.

He says Kiewit also recognizes that it has to take some risks to make sure the company is in compliance with regulations, but says it has a whole staff dedicated to this.  “We are a target…as a large consumer of construction on- and off-highway equipment,” he said during the panel discussion. “We really depend on dealers and manufacturers to keep us abreast of the current requirements.”

The panel also discussed emissions device adoption and which will become the standard. Manfredi posed the question whether it will become a VHS vs. Betamax issue, likening it to the short-lived format war between the two video viewing devices. “Everyone will eventually have to have the same [technology],” added panelist Tom Rhein, president of Rhein Associates, which publishers The Rhein Report: Powertrain Products. “Navistar is an interesting situation as they are the only engine manufacturer currently using exhaust gas recirculation (EGR) only for their trucks but will be changing over to selective catalytic reduction (SCR) technology in 2013 to comply with EPA requirements.

“If you look at off-highway equipment, there are so many engines, so many duty cycles,” Rhein said. “NOx (nitrogen oxide) and particulates opposes each other. If you have the most efficient engine in the world and it produces no particulates, your NOx skyrockets. They knew at the beginning of the emissions changes how to get NOx down…by producing an inefficient engine.”

Blake says the reality is that the technology is going to have to “morph” into something standard. He said he expects the industry to go through “a bumpy period where no one really knows what the right answer is,” and Tier 4 will “kind of marry” EGR and SCR together. “The billions of dollars in research have to be recovered somehow,” Blake said.

Each manufacturer will be looking at which is the most inexpensive technology and what produces the best fuel economy, Rhein said. “Based on this, they will come up with their final resolutions. Cooled EGR is a very inefficient engine. SCR has brought it back to be more efficient.”

With so much up in the air, it’s hard to determine what will happen in the future. Manfredi came up with these three scenarios and asked the audience to weigh in via another real-time poll as to which statement each person agreed with most :

It appears that only time will tell, but with the EPA’s continued regulations, the used construction equipment market faces challenges that will have to figure out how to hurdle – but it’s just par for the course. 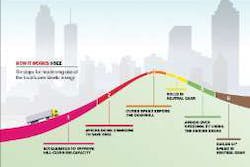 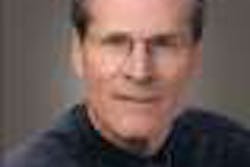 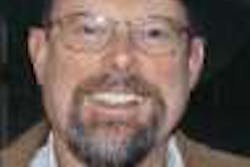