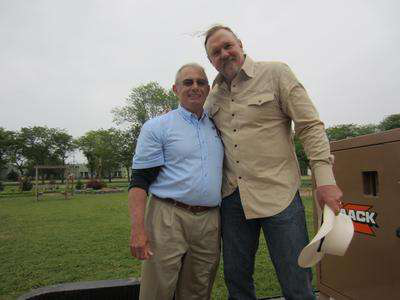 Knaack LLC is helping to support the good works of the Salina Rescue Mission in Salina, Kan., which was recently profiled on country music star Trace Adkins’ new show that seeks out and lends a hand to the regular, small-town men and women he calls Great American Heroes.

The Great American Heroes program follows Trace on his nationwide Songs and Stories tour as he takes time between shows to visit with ordinary Americans who in the face of adversity are giving of themselves for the good of their fellow man. During his visits, Adkins presents a special gift to each hero to help them continue their work, and also invites them as special guests to his concerts.

In joining with Adkins’s objective to recognize and assist these Great American Heroes, Knaack has donated two jobsite storage boxes to the director of the Salina Rescue Mission, Steve Kmetz, who was featured in the first episode of the show. In one segment, Adkins visits with Kmetz, a minister at the mission he operates that helps homeless men learn a trade, as well as the life skills that will enable them to get jobs and improve the quality of their lives. One of the training programs Kmetz has implemented is a series of building projects that teach the shelter residents wood-working and other building skills they can take with them when they leave the shelter. Under Steve’s direction, the men learn how to work as a team, while at the same time build their self-confidence.

The donation of the two Model 1020 Monster Box Cabinets to Kmetz and the Salina Rescue Mission gives the men a secure and weatherproof place to store the tools they need each day on the jobsite.

Great American Heroes is a new show on Great American Country’s fall lineup. Fans of Trace Adkins will want to tune into the show and follow Trace on his concert tour which highlights heroes in 10 communities across the country. The episode where Trace stops at the Mission in Salina, KS can be seen at the following days and times: