FNF Construction and the Arizona Department of Transportation (ADOT) set the bar very high these days in hot mix asphalt paving on Interstate highways. Consider, for example, an 18-mile-long project on Interstate 10 in Cochise County. Not only did FNF achieve high rates of production on the $10.3 million project, but the company also won bonuses for both smoothness and mix quality. And, the project won a Quality in Construction Award from the National Asphalt Pavement Association and a Build Arizona Award from the Associated General Contractors.

“We moved down the road pretty good,” says Clint Amator, FNF project manager. “On some days we laid around 3,000 tons, and we had a few days where we actually placed more than 5,000 tons. Over the course of the project, we averaged right at 3,500 tons of asphalt per day.”

FNF ran a 24-hour traffic control operation for the project. “We were working about an 18-hour milling shift to keep up with our paving operations, so we really had to resource the project 24 hours a day to keep the traffic control running,” Amator says. The contractor kept traffic running in one lane at all times. ADOT limited the length of the one-lane closure to 4 miles.

Using one Roadtec RX 900 milling machine, subcontractor Valentine Surfacing of Vancouver, Wash., milled the pavement at 12.5 feet wide. Depths of milling ranged up to 5 inches. “When we did the 5-inch milling we were getting roughly 2 miles per day,” Amator says. “But when we were actually milling 3.5 inches, then putting back 3 inches of dense-graded mix, we achieved close to 3.5 to 4 miles per day on that.”

“If we saw a problem, we brought it up right away before it manifested itself into a real issue,” says Amator. “ADOT worked very well with us to listen to our concerns. For any potential problem, we put it out in the open and proposed a solution for them prior to having delays. Our handling of the super-elevations is an example of that.”

The original plans called for increases in cross-falls at two locations, but FNF changed that to eight locations using change orders. “So we had a challenge of doing some survey work and a little bit of engineering to figure out what kind of existing grades we had out there,” Amator says. “We went in there and used differential milling to increase the super-elevations to meet the requirement of a percent and a half cross-fall.”

That meant sometimes milling 5 inches deep on one end of the mill and a 1/2 inch deep on the other end. That way FNF could pave a uniform thickness over the milled surface. If the contractor had to correct cross-fall in the paving phase, the lift could become too thick in places and compaction would not be uniform.

In addition, the final depths of asphalt could be unknown if the grade correction is done with paving. That’s bad news, because everyone has to know how much the asphalt will cost to pave the project. “If you start over-running the asphalt too much, with oil prices these days, that would really have an adverse effect on the overall cost of the contract,” says Amator.

For most of the project, FNF ran 23 belly dump trucks, most of them doubles, to haul asphalt out to the project. By using the same trucks to back-haul reclaimed-asphalt pavement (RAP) from the mill to the stockpile, FNF significantly boosted trucking efficiency. If milling and paving had been done with separate trucks, the project would have required a total of about 35 trucks.

FNF figured the more efficient operation into its bid. “It worked out real well, and cut down tremendously on the number of trucks we needed and, therefore, the trucking hours,” says Amator. Most of the truck tractors were made by Kenworth or Navistar (International).

And by using double trucks, FNF could haul up to 26 tons of payload per hauling unit. By contrast, a street belly dump can only haul 24 tons. FNF used a few single-trailer belly dumps for locations, such as bridges, that required the trucks to back up. Double trucks don’t back up very well.

As is common in the Western United States, the trucks laid down a windrow of asphalt, in this case in front of a Cedarapids pickup machine. For paving, FNF used a Caterpillar AP 1055 paver. Compaction was accomplished by three Caterpillar Model 634 rollers, all steel-wheeled machines.

The breakdown roller ran close behind the paver and made six passes. Behind that came the intermediate roller, which typically made four passes in vibratory mode. “And once the asphalt cooled down to about 180 degrees, we put a finish roller on it and ran that one in static mode,” Amator says. “We would make two static passes to finish off the compaction effort.” With the placement of a 1⁄2-inch open graded wearing course, the paving was complete.

ADOT allows up to a $4.00 per ton bonus for mix quality. Half of that comes from meeting asphalt content and gradations, and the other $2.00 can result from achieving compaction. “We averaged about $2.30 of the $4.00 per ton possible bonus on that,” Amator says.

For ride quality, ADOT awards bonuses for an International Roughness Index of anything below a 39. FNF averaged a 28 on the IRI – and won smoothness bonuses of $250,000.

How was that smoothness achieved? “We ran leveling skis on the milling machine itself,” says Amator. “And we had leveling skis on the paver also. We try to maintain a constant speed with our paver, and had good communications between the hot plant and the paving crew. If the hot plant had to slow down for any reason, the paver would do the same, to match the plant’s production rate. That way we seldom have to stop the paver.

“Plus we had a very experienced paving crew out there. Rick Allen was our paving superintendent, and he has more than 35 years of experience at this. The project went very well. We were very pleased. And again, that success doesn’t come from FNF alone – ADOT was a very good partner for us.”

County Road F gets an ‘A’

It can get warm in Wisconsin in June.

This past June, Calumet County became ready to lay the surface course of asphalt on a 4.7-mile stretch of County Road F in Wisconsin. The county hired Northeast Asphalt of Greenville, Wis.

Says Craig Van Beek, project manager for Northeast Asphalt: “We would pave part of the project with warm mix and the remainder with hot mix,” says Van Beek. “The county was excited about the idea, so we proceeded. The total overall tonnage on the project was 9,320 tons, and of that, we used a warm-mix additive for 2,320 tons. It worked out well.”

For the project, the contractor used a 400-ton-per-hour Gencor parallel-flow plant located about 20 miles from the paver. It took the trucks about a half-hour to make the trip one-way. The mix design called for Superpave 12.5 mm with 5.15 percent of PG 58-28 asphalt cement. The warm-mix additive was Akzo-Nobel Rediset LQ-1106, added at the rate of 0.5 percent of the liquid binder. Northeast Asphalt added 15 percent recycled-asphalt pavement to the mix.

Working 15 feet wide, a Blaw-Knox PF-3200 paver equipped with a Carlson Easy IV screed placed the asphalt. The contractor used a Blaw-Knox contact ski on the centerline and a contact-on-mat reference ski.

• The average burner fuel savings reached 10 to 12 percent, operating at an average of 275 degrees F.

• The asphalt could be compacted at lower temperatures

• The additive offers the potential to extend haul distances beyond what is possible with hot mix.

“There were no clear disadvantages found in regards to using the Akzo-Nobel Rediset LQ-1106 warm-mix additive,” the report states.

“Warm mix widens the temperature window at which you can compact the asphalt,” says Van Beek. “The asphalt is more workable, and easy to construct. We changed up our rolling pattern somewhat with the warm mix. With warm mix we backed off the breakdown roller because the temperatures were quite a bit lower. Then on the hot mix we worked up closer to the paver.

Taking out the cracks

Back in the mid-‘90s some road managers would prescribe sawing and sealing joints in asphalt pavements, in similar fashion to concrete pavements. It didn’t work out very well, as the Minnesota Department of Transportation (MnDOT) found on Highway 59 in Stevens County.

“The theory was that if they sawed and sealed joints in the bituminous pavement, it would control the cracking,” says Brad Cegla, an MnDOT construction engineer. “But because of the sawing and sealing on Highway 59, those joints faulted over the years. You got a bumpy pavement.”

To repair a 13-mile stretch of the two-lane road, MnDOT required milling to a depth of 1.5 inches, cold-in-place recycling to a depth of 3 inches, and two lifts of hot-mix overlays, each 1.5-inch thick. The initial milling assured the state that the height of the final roadway would only rise 1.5 inches above the original grade – an important factor to keep crossings and entrances close to the existing height.

Cegla says the state chose cold recycling because it would take out the faulted joints and prevent reflective cracking later on. “The thinking was to break up that reflective cracking from below, and provide a recycled layer between the original pavement and our new overlay,” says Cegla.

Anderson Brothers Construction of Brainerd, Minn., won a $3.5 million contract with MnDOT to rehabilitate the road. After the initial milling, a subcontractor, Midstate Reclamation of Lakeville, Minn., swung into action with its cold-in-place recycling train.

“Our crew managed to complete 2.5 to 3 miles each day, working 10-hour days,” says Andrew Dauk, Midstate’s project manager. “The specification for cold-in-place recycling called for temperatures to be 50 degrees and rising. We figured our production was pretty impressive, considering that average overnight lows for that time of year are in the low-40s and working daylight hours are at their lowest.”

A CMI-made PR1050 milling machine, working 14 feet wide, followed an asphalt tanker truck to lead off the recycling train and mill the pavement to a depth of 3 inches. The big mill fed a recycler with a screen deck and hammermill crushing system that reduced all material to 1.25 inches in size. “From there it goes into our pugmill and the PG 52-34 asphalt gets added at a rate of 2 percent,” says Dauk. “En route to the pugmill, a continuous weighing system weighs the recycled material. The weighing system is interlocked with a computer that meters out the asphalt at the correct rate.”

The recycling unit laid down the cold-recycled asphalt in a windrow, and a Cedarapids pickup machine lifted the material into a Vogele paver. Compaction followed. “We ran a pneumatic roller and a steel-wheeled roller running static,” says Dauk.

For paving the two lifts in the overlay, Anderson Brothers used a Blaw-Knox 3200 paver working 14 feet wide. A 40-foot ski, running on the mat’s centerline side, helped achieve smoothness. A Topcon electronics system controlled the screed. Two Caterpillar breakdown rollers each made three passes to help achieve density. The intermediate roller was a Caterpillar PS360C rubber-tired machine, and the finish roller was an Ingersoll Rand DD110.

“We earned a smoothness bonus for that project,” says Mike Niemi, senior project manager for Anderson Brothers. “We have very competent people on our crews and we have good equipment.” 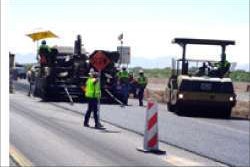 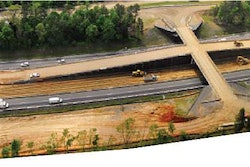 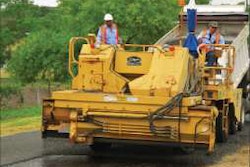