Make it Last, and Make it Smooth 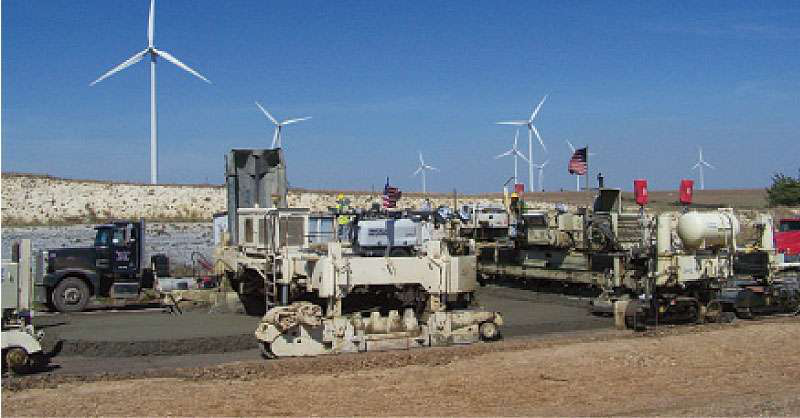 To expedite production, Koss ran two belt placers ahead of the paver (right). The first placer is partially visible (left).

For more than 30 miles, Interstate 70 in western Kansas was worn out. It was a full-depth asphalt pavement; sections ranged up to 20 inches deep. The most recent asphalt treatments had lasted just five to seven years, says Andrew Gisi, geotechnical engineer with the Kansas Department of Transportation (KDOT).

The state wanted something that would last longer, so KDOT chose a 6-inch bonded concrete overlay – 1.45 million square yards of it throughout nearly 31 miles. Last year, Koss Construction milled out 6 inches and slipformed two projects with concrete on 15.1 miles of four-lane interstate. Including shoulders, the two projects totaled 725,000 square yards and cost $20.1 million. This year, Koss will mill and pave two more similar projects on I-70 for a total of 727,000 square yards at a cost of $21.9 million. 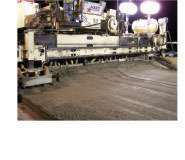 The paver pushed only a small head of concrete, which made it easier to achieve excellent smoothness numbers. 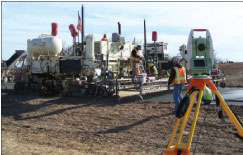 Koss ran stringless for two days on I-70 in western Kansas.

The Colorado Department of Transportation (CDOT) is an especially important player in the Kansas situation, because KDOT used Colorado’s pavement design criteria and system in designing its 6-inch overlay on asphalt. The overlay is sawed into panels that are 6 feet square – and such overlays have provided Colorado with 10 to 12 good years on heavily traveled roads and remain in service.

Gisi says that Kansas expects to get 20 years from the “6-by-6-by-6” overlay, possibly with some panel replacement at mid-life. “The road really needed reconstruction, but we couldn’t afford that,” says Gisi.

“We get really good smoothness numbers everywhere we go,” says Robert Kennedy, quality control manager for Koss. “It is not uncommon for us to get single digits.” It is easier to achieve small smoothness numbers on the thinner 6-inch pavement, because the paver is not pushing a big head of material. “You can push the small head of mud and you are not extruding a lot of concrete either,” says Kennedy. “You don’t get a lot of pushing or moving the paver around is what I am saying.”

Kennedy explains how Koss achieves such smooth-riding pavements. The contractor used dual stringlines. “We pay a lot of attention to the stringlines to make sure they are set up right. We make sure our paver is set up right and that our concrete batch plant is right. Then when we are confident that all of those things are set up, you have to be consistent,” says Kennedy. “The plant has to give you consistent slump on the concrete in every single batch after batch. And you have to have consistent delivery so that the paver never stops. Everything has to be in unison, working together.”

On a good day, Kennedy said Koss paved 1 mile a day, working 30 feet wide. “We averaged about 1,800 square yards per hour, or maybe a little better,” says Kennedy. Two belt placers spread concrete in front of the paver, and that helped boost production. That way, Koss could dump two trucks at once. Each project last year had its own Rex Model S batch plant. Typically15 trucks hauled concrete to the site. An aging CMI paver slipformed the 10-foot outside shoulder.

For nearly 2 miles of pavement last year, Koss paved with a stringless automated control system from Leica Geosystems. The automatic paver control system bases its guidance on a digital terrain model – a digitized 3D model of the pavement – that is entered into a computer onboard the paver. The paver also has two prisms, mounted above the machine, to receive signals from the two robotic total stations set up on tripods ahead of the paver. The prisms on the paver have a relation to points on the concrete paver’s pan.

When setting up the two total stations, a technician back-sights each of them to known control points. That fixes the location of the total stations relative to the runway’s digital model. The total stations can then “see” two prisms on the paver and communicate to the paver – by free-wave radio – the paver’s precise location. The on-board computer then processes the differences between the actual paver location and the digital terrain model. Knowing those differences, the computer controls the paver pan location automatically.

“The smoothness was good with the stringless system,” says Kennedy. “But those weren’t the two smoothest days we had. We were still learning the equipment. The guys were still on a learning curve. The crew liked the access to the equipment and they liked the access to the slab for finishing. But some of them have been paving for 20 years, and to not have that stringline to check grade was a little concerning for them.”

Kennedy says one advantage to the milling and concrete overlay process was that Koss could correct slopes and transitions into and out of curves. With so many asphalt treatments over 40 years, the slopes had gone awry. “We could go in there and pave back to the exact slope and correct all of those geometric issues,” Kennedy says.

Koss inserted tie bars at 3-foot intervals across the longitudinal joints, but no dowel bars on the transverse joints. An automatic tie bar inserter on the Guntert & Zimmerman paver pushed the bars into the freshly-placed concrete.

The four I-70 projects by Koss are really Kansas’ first such major concrete overlays on asphalt. “We spent a lot of time and effort working with the KDOT people on this overlay product,” says Todd LaTorella, executive director, Missouri-Kansas chapter of ACPA. “KDOT had a need. What they were doing on that stretch of I-70 was not performing to their liking. Their asphalt overlay actions tended to have successively shorter lives. They finally got to the point that they felt comfortable with concrete overlays.”

A variety of 4-inch concrete overlays

Concrete overlays have been standard practice in Iowa for years. Various counties in Iowa have been using 6-inch concrete overlays since 1975, says John Cunningham, vice president of the Iowa Concrete Paving Association. “Iowa counties have done hundreds and hundreds of miles of 6-inch overlays on asphalt. We did not count on the bond between the two materials, even though we knew we would have it,” says Cunningham. “They were not designed as composite pavements. We really just counted the old asphalt as a strong base under a new pavement.”

In the past three years, Mitchell and Worth counties in Iowa have paved 150 miles of two-lane county roads with 4 inches of concrete over asphalt. “Today, new research factors in the benefit that you get from the bond between the asphalt and the concrete, and recognizes that the two layers form a composite design,” says Cunningham.

With the newer 4-inch overlays, longitudinal joints are sawed on the centerline of the 22-foot slab, and at the quarter points, or at 5.5-foot spacings. Transverse joints are spaced at 5.5- to 6-foot intervals, Cunningham says.

Whether or not a contractor mills off some of the old asphalt depends on the county. Some counties mill the asphalt to roughen the surface and get a better bond with the concrete. And some counties use milling to remove surface deformations in the asphalt so that they can control the quantity of concrete in the overlay. Other counties simply pave the overlay over the ruts and let the concrete quantity become what it will.

“We have also done many airport runways with 6-inch overlays on asphalt,” says Cunningham. 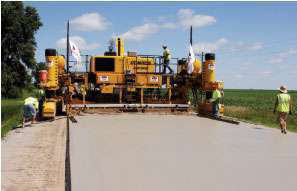 CFI has slipformed most of the 4-inch overlays with their GOMACO two-track GP-2600 paver. And in the spring of 2011, CFI bought a GOMACO four-track GHP-2800. On both pavers, CFI has used an automatic stringless control system from Leica Geosystems. “We had the 2800 delivered right to the jobsite and it was paving stringless two days after delivery,” says Schmitt.

We asked Schmitt why he bought the stringless system. “We were thinking labor savings, smoothness, ease of use, and it cuts down on man-made errors,” comes the reply. “It cuts down on the actual string errors or knocking down of strings. It’s a real advantage to show up on the job Monday morning and not have six miles of string laying on the ground because some vandals came along and cut it or drove through it.”

Schmitt says the stringless system is easy to use and quick to learn. “Once you set up the digital surface model of the job, called a D45 file, we get the file from the surveyor, then the county approves it. We plug it in and hit the button and we’re paving,” says Schmitt.

“We figure that anywhere from four to six guys can do something else besides set string,” says Schmitt. “You don’t have one guy out in front of the paving train checking the stringline and eye-balling it so to speak. The days of eye-balling are gone.”

Once an operator is familiar with the stringless system, he can stop the system, move, set up and be ready to pave again in 15 minutes. It’s simply a matter of reloading another D45 file, getting the system set up again and starting to pave.

He says the benefits of the stringless system far outweigh any problems CFI has had with it. “I would have done it two years earlier if we had known all of the benefits,” Schmitt says.