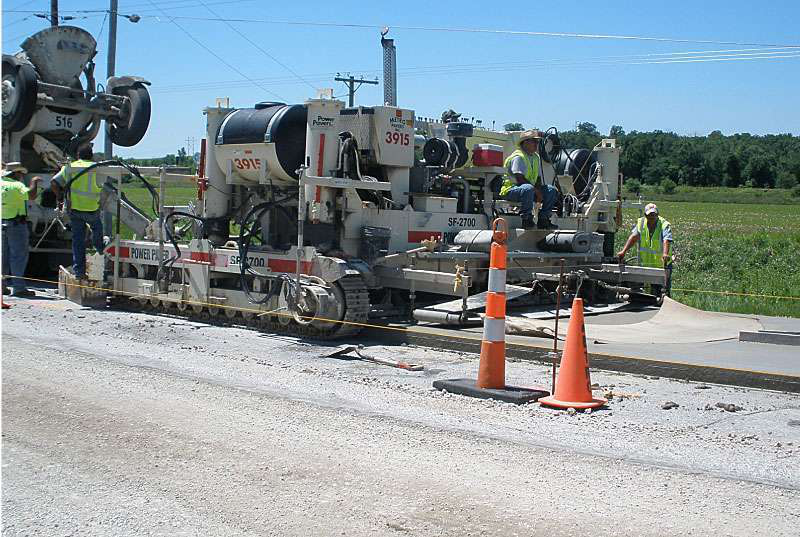 But being one of 11 Iowa highway “Stimulus” projects, worth in total $13.7 million, makes it a little less ordinary. So does its new surface.

The unbonded concrete pavement overlay of Oak Crest Hill Road from south of the city limits of Hills to the Washington County line was a nearly $1.845-million job completed by Iowa City-based contractor Metro Pavers and funded through the American Reinvestment and Recovery Act (ARRA), more commonly known as “the Stimulus.” Iowa received nearly $358 million for state and local roadway, bridge, trail and freight rail projects through the Stimulus, and Governor Chet Culver’s I-JOBS initiative kicked in $115 million for transportation projects. 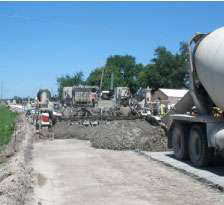 The Oak Crest Hill Road concrete overlay covered two lanes and spanned approximately 5.5 miles from start to finish. The county required traffic to be maintained in one direction at all times, says Nick Kempf, co-owner of Metro Pavers.

“Because it is not a primary highway, it was not that heavily used, but [the county] still wanted to improve the road system,” says Kempf. “They tried to ‘re-profile’ it and take out some of the bumps.” And work went all the more easily, he says, because “most people along the roadway were happy to see the road improved.” 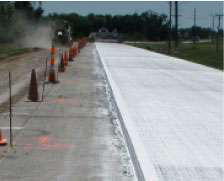 The Oak Crest Hill Road $1.845-million Stimulus job is a concrete overlay that covered two lanes and spanned nearly 5.5 miles from start to finish. The Iowa road was widened to provide an extra lane for bicyclists.

The overall job was fairly straightforward, says Kempf, but that doesn’t mean it didn’t have some challenges. The University of Iowa is located in Johnson County and this means a fair amount of bicyclists. As part of the project, the county asked that bicycle lanes be developed “to make it safer,” Kempf says. However, this means the road has an extraordinary width for a secondary road. “The driving lanes are 24 feet plus the extra lane to bring it up to about 34 to 36 feet,” Kempf says. As a secondary road, there were no contraction baskets, Kempf pointed out, so his team cut every 15 feet for joining.

There has been a great deal of whitetopping in Johnson County. Concrete overlays have become commonplace in Iowa as an economical means to rehabilitate the secondary road system. But for this project, rather than beginning with the removal of existing concrete, the concrete overlay was placed over an asphalt roadway. It was also poured on the shoulders that were compacted and then built up to accommodate the new bike lines. “We tried to maintain about 6 inches on the old roadbed and 8 inches on the shoulder,” Kempf says. “Our ditches had to be filled, compacted and then brought up to grade.”

The rock laid after the shoulders were compacted includes crushed recycled concrete and modified sub base. Although this wasn’t a difficult process, at times it was challenging. “We’d have weeks where the dirt contractor could not work because it was too wet,” Kempf points out. “We had to deal with the weather. We had the shoulders built up and were ready to pour on a Saturday, but then we had 2 inches of rain the night before.”

The timing of the job also presented challenges. The Oak Crest Road job was the first time Metro Pavers undertook a concrete overlay in summer. Previous overlays had been done in the fall. The summer presented challenges, but by waiting until fall, Metro ran the risk of the maturity curve taking longer. And as the day warmed up, the asphalt had to be kept cool. “We had to bring in a water truck to cool off the asphalt before we could pour on it,” Kempf explains. “We didn’t need to bring it in until between 10:30 a.m. or 11 a.m., but then we would need it all afternoon.”

According to the specs, the asphalt couldn’t be more than 90 degrees Fahrenheit because it would set on the overlay but not on the rock, Kempf points out. “We had to keep a consistent ground temperature,” he says. “We had to cool it down and stay just ahead of the paving machine. We had to have it cooled off, but it couldn’t be wet.”

Concrete overlays can be a good choice for the widening of an old pavement with narrow traffic lanes, the addition of new travel lanes – as was done with the addition of shoulders for bicyclists on Oak Crest Hill Road – or the extension of ramps, according to the University of Iowa National Concrete Pavement Technology Center’s (NCPTC) “Guide to Concrete Overlay Solutions.” (For a downloadable PDF of the guide, go to http://www.cptechcenter.org/publications/guide_concrete_overlays.pdf.) “Adequately designed and constructed widening can improve both faulting and cracking performance of the pavement,” according to the guide. “Widened slabs should be used with care with concrete overlays on stiff foundations (such as on concrete pavements) because of the increased risk of longitudinal cracking.”

NCPTC gives these rules of thumb for widening:

• Keep joints out of wheel paths, especially for bonded resurfacing.

• The width of widening rather than depth has more of a positive effect in reducing loads to the top of the existing pavement.

Equipment used: CMI trimmer, Power Pavers/Power Curbers 2700 slipform paver and Power Pavers/Power Curbers TC-2700 texture curing machine. “The 2700 slipform paver worked very well for the job,” Kempf says. “It’s very mobile for the kind of work we have, but it’s still heavy enough to do this kind of work. It’s a two-track machine – easy to load and easy to unload for transport.”