Bomag will display its Cedarapids CR552 mainline paver at ConExpo-Con/Agg 2014 in March.

The company says the machine has the largest rubber tire in its class, allowing the CR552 to perform full-width paving applications such as airports, interstates and state highways, industrial paving projects, and major county road and highway construction.

The machine’s heavy-duty frame and bogie pivot, kingpin and bogie bearings offer a hopper load bearing capacity of up to 27 tons.

A Tier 4i diesel engine powers the CR552, delivering 260 horsepower. The 6-cylinder, 24-valve engine increases fuel efficiency and reduces noise levels by varying the fuel stream to use only the amount of fuel needed for the application.

Cooling air is drawn from above the hood rather than ground level for cleaner air quality and exists primarily through the front grill, resulting in a pressurized engine compartment that reduces debris infiltration.

The paver has a large tire drive that allows for increased flotation, while the machine’s front-wheel assist option improves draw-bar pull by up to 50 percent over a normal two-wheel drive system.

The machine’s Frame Raise System raises and lowers the rear of the paver to allow the operator to fine-tune the head of material at the spreading augers, while the Three-Point Suspension isolates the frame from the drive system to “float” the pavers over subbase irregularities, maintaining consistent material feed height at the screed.

An optional proportional steer assist enhances maneuverability by holding a tighter turning radius. Applied in three stages – low, medium and high – the system is controlled by a toggle switch on the operator’s console. This feature is designed to help maneuverability by allowing the paver to better hold the line, whether paving straight or in cul-de-sacs.

The paver will be on display in booth #50675 (Central Hall) at ConExpo-Con/Agg. 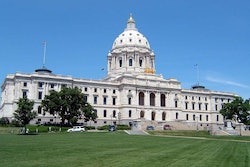 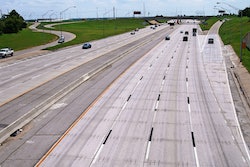 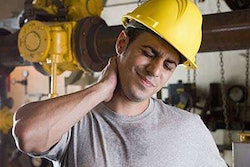