As roller-compacted concrete inexorably penetrates existing asphalt pavement markets, research into their composition and performance is ramping up as specifications are being fine-tuned by ASTM.

Up to the past decade, roller-compacted concrete (RCC) mixes principally were used in a variety of heavy-duty applications such as logging yards, loading docks, intermodal port facilities, large parking areas and dams. But as highway agencies and contractors followed in the wake of early adopters, in the past 10 years, it has started to move into pavements.

“Roller-compacted concrete is gaining popularity as a paving alternative for a number of roadway applications,” says Stacy G. Williams, Ph.D., P.E., research associate professor in Department of Civil Engineering at the University of Arkansas-Fayetteville.

What it doesn’t do, he says, is provide a high-level pavement suitable for arterials or interstate-type highways. “RCC does not provide all of the features of conventional concrete pavement,” Luhr says. The final product will lack acceptable pavement surface texture and uniformity, smoothness and, for that matter, aesthetics.

Typically, RCC is produced in a pug mill or central batch plant and is transported by dump trucks. It’s often placed by a robust, oversized European-style paver, or sometimes by a conventional asphalt paver. It’s compacted by smooth-wheeled rollers and cured with water or curing compound, Luhr says.

RCC is placed at a 4-inch minimum and 8-inch maximum depth, but sometimes 10 inches when used with Eurostyle heavy-duty pavers. “Adjacent lanes are placed within 60 minutes to maintain a ‘fresh joint,’ and multiple lifts [are] placed within 60 minutes for bonding,” he says. Production should match paver capacity and, like all pavements, a continuous forward motion should be maintained for optimum smoothness.

RCC is seeing use in more than just pavements and industrial parking and storage areas. Recently, RCC was used for a Catholic grade school parking lot overlay in New York City.

The Wayne Companies of northwestern Pennsylvania and southwestern New York completed a 50,000-square-foot unbonded overlay of 4 inches of RCC directly on the existing asphalt, which makes it one of the few, if not the only, unbonded overlay projects using RCC in the country, notes the National Ready Mixed Concrete Association (NRMCA). By using a conventional asphalt paver and hauling the RCC in dump trucks, Wayne convinced the owners RCC could solve their situation more economically than tearing up existing asphalt and replacing with either new asphalt or conventional concrete.

Despite RCC’s low rate of shrinkage cracking, the decision was made to joint the pavement similarly to a conventional overlay to reduce the risk of reflective cracking from the old asphalt. The new RCC parking lot came in under the asphalt bid and should provide years of service due to the durability of concrete, NRMCA says.

Use of roller-compacted concrete in pavement construction is increasing, say Yoon-moon Chun, Tarun R. Naik and Rudolph N. Kraus of the Department of Civil Engineering and Mechanics, College of Engineering and Applied Science at the University of Wisconsin-Milwaukee, in their paper, Roller-Compacted Concrete Pavements.

“Roller-compacted concrete is a zero-slump, highly compacted concrete that is placed by equipment similar to that used in asphalt pavement construction,” Chun, Naik and Kraus say. “RCC pavements may contain fly ash or other powder materials to increase the fines content and to fill voids between aggregate particles in RCC.”

Normally, use of air-entraining admixture provides a proper air-void system to prevent damage to the concrete due to freezing and thawing, they say. “Air-entraining admixtures have been added to RCC mixtures in laboratory tests and such concrete mixtures have performed satisfactorily,” they write. “However, due to the nature of RCC, it is very difficult to provide a sufficient amount of entrained air in RCC mixtures.”

Instead, Chun, Naik and Kraus say the most common method of providing sufficient durability for RCC pavement against freezing and thawing is by judicious selection of mixture proportions, including a low water-cementitious materials ratio, a free draining base course material and achieving a high degree of RCC compaction (96 to 98 percent of maximum density), with the use of fly ash or other supplementary cementitious materials, or other materials that add fines to the RCC mixture.

“Although the rate of strength gain of RCC is lower than that for conventional concrete pavement, the final strength is higher,” the authors say. Compressive strength, at the age of 28 days, as high as 40 MPa (6,000 psi) is common, and the 28-day flexural strength can be 5.5 MPa (800 psi) or greater. It’s been shown that RCC pavement compacted to 96 percent of maximum density is more than twice as strong as the same mix compacted to 86 percent.

Because RCC pavement is much stronger and durable than asphalt pavement, Chun, Naik and Kraus add, RCC will not rut from high-axle loads, or shove or tear from turning or braking of operating equipment. It will not soften from heat generated by hot summer sun or material stored on RCC floors (for example, compost).

“RCC pavement offers a substantial cost savings over conventional portland cement concrete and asphaltic concrete pavements when used in heavy wheel load applications,” they say. “A first-cost savings of 15 to 25 percent can be expected if RCC is specified as a pavement alternative for projects requiring wheel loadings of 50,000 to 120,000 pounds.”

These cost benefits are driving use – and research – of RCC in Arkansas, where RCC is proving to be a cost-effective alternate for building energy sector haul roads that will stand up to trucks serving new natural gas wells and infrastructure.

This haul traffic is tearing up existing roads: More than 1,000 miles of roadways in Arkansas have been adversely affected by the increased traffic loadings, leading to a sharp acceleration of pavement distress.

In response, the Arkansas State Highway & Transportation Department is seeing how new RCC pavements are performing in the Fayetteville Shale “play” area.

“The accelerated pavement distress that has become prevalent in the area illustrates the need to examine cost-efficient rehabilitation strategies that can provide a long service life,” the agency says. “Roller-compacted concrete pavement is one such potential alternative … [t]he reduced cement content and ease of construction result in substantial cost savings. RCC is strong and well-suited for heavy traffic loadings, but the success of any pavement depends on the quality of its foundation.”

In this area, two test sections were constructed, each 1-mile long. Section I had 6 inches of full-depth cement-treated base reclamation, topped by 7 inches of RCC. Section II had an 8-inch RCC overlay of the existing pavement including level-up. Safety edge was used on both sections. Both sections were diamond-ground to improve smoothness, a major criticism of RCC surfaces.

This month, a subcommittee exploring standard specs for roller-compacted concrete was to meet to further develop specs for testing RCC in the lab.

ASTM International’s Subcommittee C09.45 on Roller-Compacted Concrete is working on three proposed standards for roller-compacted concrete. They are the following:

• WK33682, Test Method for Preparation, Compaction and Density Determination of Roller-Compacted Concrete Specimens by Means of the Gyratory Compactor. According to subcommittee member Dr. Stacy G. Williams, Ph.D., of the University of Arkansas, because the Superpave gyratory compactor was developed during the 1980s as a means to provide a laboratory simulation of the compactive effort imparted by rollers on a Superpave asphalt mat, it may be applicable to RCC, as it’s compacted using the same type of roller. Therefore, preparing RCC specimens in a laboratory can be expected to provide similar results to those experienced in the field.

• WK41101, Practice for Molding Roller-Compacted Concrete in Beam Molds Using a Vibrating Hammer. Once approved, WK41101 will be used to consolidate RCC into beam molds with established flexural strengths. This is important because RCC is gaining use as a pavement for roads, shoulders and streets, and all pavements need flexural strength data for design purposes.

• WK42461, Test Method for Density (Unit Weight) and Air Content (Pressure Method) of Freshly Mixed Roller-Compacted Concrete. WK42461 covers the determination of density and air content of freshly mixed concrete. WK42461 will be used in the design of roller-compacted concrete mixtures and to aid in controlling the quality of those mixtures during RCC construction. 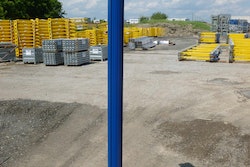 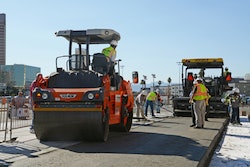 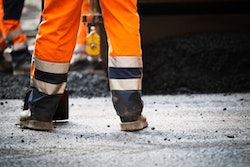 Construction industry avoids list of 10 worst jobs for the future