A magic mix of magnetite and microwaves offers a super year-round pothole fix.

Put two great pieces of innovative thinking together and you might come up with a superior pothole patching recipe, one that even defies winter at its coldest.

The University of Minnesota Duluth’s Natural Resources Research Institute (NRRI), says the recipe goes like this: “Dust a large pothole with magnetite concentrate. Preheat with a microwave to 230 degrees F. Add a mixture of recycled asphalt, recycled house shingles and more magnetite. Microwave for 7 minutes to almost 300 degrees F. Tamp down while still hot.”

The two halves of the whole are the use of the magnetite and the power of the microwave.

“What I like about it is that it’s particularly effective in winter, when so many other repair options don’t work too well,” says Lawrence Zanko, a senior research fellow at NRRI. “A week later those other repairs may be failing or gone.

“Currently, if a repair lasts the season, it’s considered a success. But we think that when these [microwave plus magnetite] repairs are done, they’re done,” Zanko says.

The University of Minnesota (UMN) says findings from a research team led by Zanko indicated that mixing ground magnetite — an iron mineral found in taconite ore — into the asphalt patch material and then “nuking” it with microwaves will seal the patch far more securely than conventional methods. “The magnetite we use in the repair mix enhances the absorption of microwave energy, which leads to faster heating of the repair,” Zanko told the university. “The magnetite also helps prevent the transmission of microwave energy more deeply into the ground, keeping more energy within the repair.”

And of course the microwave can make sure the pothole itself is not frozen or damp when work starts.

Zanko told the university that he got the idea for using microwaves and magnetite about 10 years ago from colleague David Hopstock, who worked in the U.S. Bureau of Mines in the Twin Cities.

“In 2002, Dave showed us that magnetite, found in abundant taconite waste rock, readily absorbs microwave heat,” said Zanko. “He asked us to help him develop an all-season and long-lasting road repair compound and chemical-free deicing mix. With the high-powered and mobile microwave we can prove out the concept on real road conditions.”

The two men eventually contacted Microwave Utilities Inc. (MUI), a small Minnesota company that had a prototype mobile technology to use microwaves to thaw frozen ground. The research project gradually grew, as did the microwaves, including experiments with a lawnmower-sized device and a scaled-up test chamber in Duluth that is, literally, a walk-in microwave oven. The company and the researchers began testing their work on local potholes, with, they say, impressive results. Their 2011 pothole repairs, they say, are still going strong.

The technology starts with removing excess water and debris from a pothole and adding a mix of ground-up recycled asphalt pavement and shingles and powdered magnetite (1-2 percent by weight), says the university. A 50-kilowatt generator on an MUI truck produces microwaves; they travel through an aluminum tube (called a waveguide) to a stainless steel box that is placed over the pothole and surrounding pavement. Flanges seal the box against microwave leakage. Within minutes, says UMN, microwave heating raises the repair area temperature to 250-300 degrees F. With mixing and compacting, the fill binds well to the existing pavement.

As an added bonus, metal utilities like valve shutoffs and manhole structures reflect the microwaves, so they don’t heat up if an adjacent pothole is undergoing repair.

Microwave Utilities devised the truck-mounted system – The Heat Wave – and its 50,000 watts of microwave power (your kitchen appliance is closer to 1,000 watts). MUI says the system is controlled by a proprietary microprocessor that monitors all aspects of the machine’s operation and allows the operator to preprogram for asphalt/soil type, buried utilities, and other conditions related to the site.

The microwave energy heats both the mix for the new patch and the surrounding asphalt allowing the patch to fuse to the existing roadway. Within a short time, the microwave is lifted and the asphalt is cured and ready to be driven on, says MUI. With this process, a temporary cold patch no longer needs to be used when the weather turns really wintry, and the Heat Wave can be used to permanently repair the asphalt all year round.

One unanswered question: Can repair crews heat their lunch as they work? 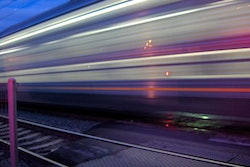 Transportation employment drops by 5,100 in June

Do You Have a Handle on Your Costs? 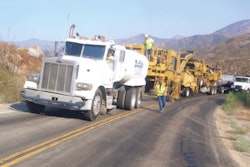