Winter road maintenance gets ready for the toughest season 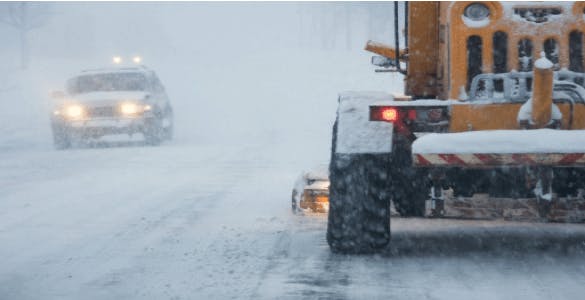 Winter work on our transportation infrastructure is (a) essential and (b) expensive. But just how much pressure does winter bring to bear on the people who care for our highways and bridges?

According to data from 1995 to 2004 from the National Highway Traffic Safety Administration (NHTSA), each year:

• More than 133,000 persons are injured in crashes during winter weather. That is equal to more than 4 percent of all crash injuries.

• More than 1,500 people are killed in crashes during winter weather, which is equal to more than 3 percent of all crash fatalities.

What’s more, NHTSA data shows that approximately a quarter of the more than six million vehicle crashes in America every year are weather-related (occurring in bad weather or on slick road surface.) “On average, 7,130 people are killed and more than 629,000 people are injured in weather-related crashes each year,” according to an analysis of NHTSA fourteen year averages data from 1995-2008. By far the most dangerous place to drive is on a wet pavement during rainfall. In fact 75 percent of weather related crashes happen on wet pavement and 47 percent while it is raining.

Winter weather brings its own on-the-road problems. According to the NHTSA data analysis, 15 percent of crashes happen during snow or sleet, 13 percent on icy pavement and 11 percent on snowy or slushy roads. If there’s a surprising number here it’s that only 3 percent happen in fog.

Ol’ Man Winter also piles on to our national highway system congestion problems. About a quarter of the one-off highways delays (not the predictable, daily slowdown-for-miles rush-hour commute kind of delay) in the country are caused by snow, ice and fog. That comes to about 544 million vehicle-hours of delay per year.

The Ice of Texas

The Texas Transportation Institute at Texas A&M University recently developed a winter weather operations manual for the Texas Department of Transportation (TxDOT), and also what it called “a playbook for winter storms in Texas … to be used for general public awareness of winter storm operations.” 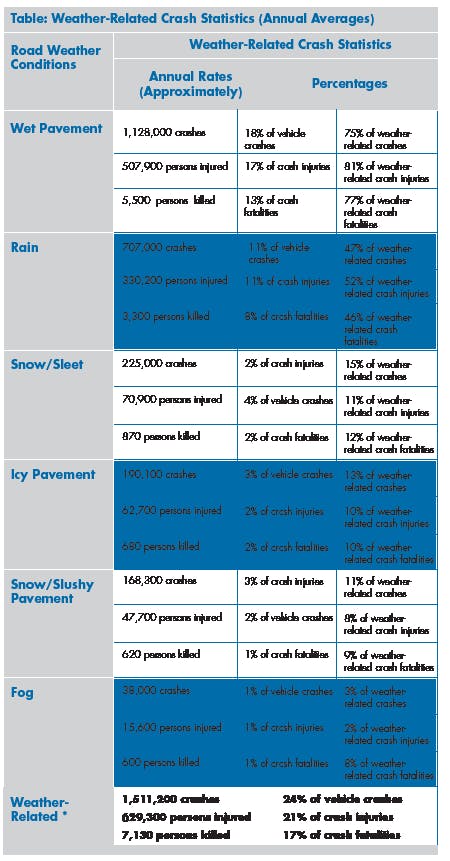 TTI notes, “There is no cookie-cutter approach to dealing with winter storm maintenance issues.” But, says the Institute, “it is important to have a readiness plan, especially at the district level. Keeping the public aware of those efforts and plans are a critical key to success.”

Emerging technology holds the potential to change the game, and TTI notes that innovations using GPS and GIS can help devise management strategies forwinter weather plowing and approaches for anti-icing and deicing materials.

“These recommendations include guidance for material use (e.g., salt brine), application times, and rates.” The software helps agencies minimize the amount of material applied to the roads while maintaining the highest level of service possible under given resource constraints, says TTI.

And, the report points out, it can also serve as a training tool for new and less-experienced maintenance managers.

TTI’s TxDOT plan also notes that it is crucial to connect with the community and the traveling public to keep them informed of the most current roadway condition. A Pew Research Center study found that local television and the Internet were the most relied-upon sources for information regarding weather, while radio was the most popular form of media for traffic information.

“It is also beneficial,” notes TTI, “to educate both the media and the public on the capabilities of the local DOT offices so that there are realistic expectations regarding response to each approaching winter storm.”

Any Texan will tell you the state is huge, and TTI predictably found that winter weather management practices in different regions of the state that suffer their own distinct winter weather differed significantly.

But, says the Institute, “Adopting a systematic approach for reporting equipment, chemical, material, and supply inventories will provide visibility and control of key assets needed to effectively respond to winter weather events. 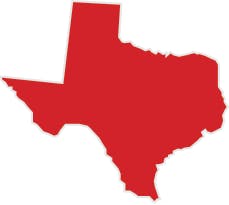 “Also, this approach will help facilitate integrating the business practices of the maintenance sections, districts, and regional service centers in a manner that will provide accurate and timely information to TxDOT decision makers involved in winter weather operations.”

TTI reports that it is essential to know the availability of resources and procedures in place for accessing them when needed.

“Multi-district and metropolitan operational plans must use the creative thinking of key personnel internal and external to TxDOT to organize, employ, and manage forces and resources.”

“VDOT captures significant volumes of salt-laden stormwater runoff at its 300+ salt storage facilities throughout the state,” says the report, noting that the disposal options for this water are limited and costly. The research looked at the possibility of recycling salt-contaminated stormwater runoff for producing brine that can be used for pre-wetting of granular NaCl and direct application.

• Low HRTs (high flow rates)and high temperatures are the optimum conditions for brine generation in terms of time of operation and percentage of NaCl used. Lower HRTs will require more frequent additions of road salt to the brine generation reactor.

• The lower water temperatures likely to result from the use of water from stormwater ponds during the late fall and winter will reduce the efficiency of the brine generation equipment compared to the use of water at a higher temperature coming from a groundwater source. The efficiency of brine generation when stormwater is used should be similar to that when a municipal drinking water source is used (temperatures in these sources are comparable.)

• TSS levels of approximately 20 mg/L, as found in VDOT’s captured stormwater, do not reduce the efficiency of the brine generation process. The values for TSS in the stormwater were relatively small compared to those for the source of granular NaCl.

• With minimal filtering, stormwater from runoff storage ponds can be recycled for brine without harm to brine generation or distribution equipment.

• The implementation of a VDOT recycling program using stormwater runoff for brine generation appears economically feasible. There will be large variations in the benefits accrued by VDOT depending on the volumes of stormwater runoff accumulated during the year, the total volume of NaCl applied, and local disposal costs.

• Between the two brine application alternatives examined, for most scenarios investigated, the combination of direct application and pre-wetting results in a faster positive return on VDOT’s initial investment .

• With average total NaCl application volumes, the maximum benefits derived from stormwater reuse are obtained when capturing less than 60 MG of stormwater statewide. 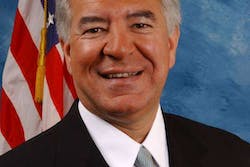 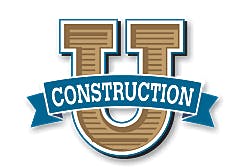 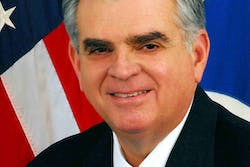