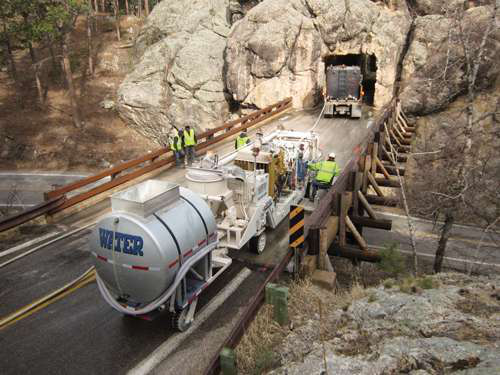 Epoxy chip seal is a favored method to bridge repair when dealing with worn decks because it seals micro-cracks in the concrete decking, protecting the
structure’s rebar from salts.

Americans love to explore the countryside in their cars, and many regions have obliged by designating special scenic travel routes. But few roads have been as deliberately designed to appeal to the sensibilities of travelers as Iron Mountain Road in South Dakota.

Iron Mountain Road is the north-south leg of the historic route 16A, which departs from Route 16 to access the Mount Rushmore National Memorial and Custer State Park. Tunnels cut into rock outcroppings were situated to frame views of the faces carved into Mount Rushmore and are an integral part of the tourist experience when visiting the memorial. The road is known for its single narrow lanes as well as its spiral or “pigtail” bridges, engineered in 1932 by the superintendent of Custer State Park to traverse the steep elevation gain of the mountainous area. The steel structures of the bridges are covered by heavy timber facings, in keeping with the rustic character of the roadway.

Maintaining the historic road using modern equipment and techniques – without altering its character – was a challenge confronted by repair crews who undertook its resurfacing in early 2014. The $4,334,109 project called for milling and resurfacing 17 miles of roadway, along with bridge repair. Complicating matters was the fact that the region’s economy depends heavily upon summer tourism. While the towns surrounding Mount Rushmore have resident populations that number in the hundreds, the memorial is visited by nearly 3 million people each year. Furthermore, snowy winters – Mount Rushmore is 5,680 feet above sea level – meaning that prime construction times coincide with the tourist season. The repair schedule for Highway 16A was restricted to the narrow window of time in which temperatures were warm enough to accomplish the roadwork but closures inconveniencing the traveling public were minimized.

By April 14, repair efforts on four pigtail bridges were underway. The repair method chosen was two-coat bridge deck epoxy chip seal. As per the South Dakota Department of Transportation (SDDOT) Standard Specifications for Roads and Bridges, epoxy used must consist of a base component and a hardener; the second component of the system is a cover aggregate that conforms to specified hardness and gradation. The placement process on Highway 16A involved application of the mix at 40 sq.-ft. per gallon with a second application occurring three or four hours later, applied in the amount of 20 sq-.-ft. per gallon, explains Ryan Steinback, project manager, J.V. Bailey Co., Inc., the prime contractor for the bridge work. The two coat application of the product improves the surface’s life span and wearablilty.

Epoxy chip seal is a favored method of bridge repair when dealing with worn decks because it seals micro-cracks in the concrete decking, protecting the structure’s rebar from salts. The epoxy resin also binds well with concrete decking on the bridge. Cover aggregate provides skid resistance, improving the safety of the roadway. Epoxy chip seal’s easy application process and the fast cure time also help keep project schedules on track.

SDDOT specifications require diamond grinding of bridge decks in preparation for the placement of epoxy chip seal overlays. Grinding eliminates existing tining and irregularities in the road surface. A ground profile affords a clean and uniform surface, improving the adhesion of the chip seal coating. The SDDOT specifications dictate longitudinal grinding that results in parallel corduroy texture consisting of grooves between 0.090 and 0.130 inches (2 and 3 mm) wide, with the distance between grooves being between 0.060 and 0.125 inches (1.5 and 3 mm). The peaks of the ridges are required to be equal to or less than 1/16-inch (1.5 mm) higher than the bottom of the grooves. The existing surface on the 16A bridges had been in place since 1991 and was very rough, so grinding the surface improved its overall smoothness.

Bridge repair work, including the epoxy chip seal, is expected to add 12 to 15 years to the life of the structure, according to Steinback.

“The process of grinding bridges and applying an epoxy chip seal wearing course is a fast and easy way to extend the life of bridges,” says Rory Heizelman, project engineer at SDDOT. “In South Dakota, this repair method has been seeing increased use in the past few years. It also has a lesser impact on the traveling public than some other repair methods.”

Getting the job done

Considering that a full-size Target Model PR 3800 grinder was used on the bridges, navigating the road’s narrow lanes, elevation gain and tight curves was a challenge. All road repair equipment also had to be kept out of the state and national parks, so bypass routes were all that were available for crew to use.

“The grinder was too heavy to be trucked up the narrow mountain road. Accompanied by cars in front and behind, the grinder had to be driven – at a maximum speed of 50 feet per minute – up to the bridge locations,” said Dan Stoltenberg, the grinding division manager at Diamond Surface Inc. This meant unloading the equipment as much as 2 miles away from the site of the grinding. 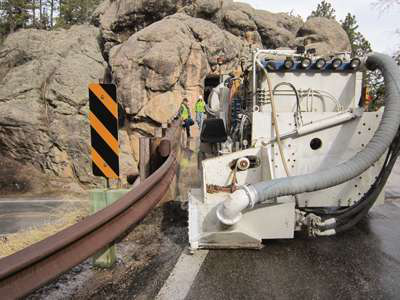 Working on the narrow Iron Mountain Road in South Dakota, two grinder operators were required to control the accuracy of the grinding process.

Working on the narrow roads was also tricky. Two grinder operators were required in order to control the accuracy of the grinding process. The regular grinding machine was unable to maintain blade contact in areas near the bridge where the turning radius was tight and its use would have resulted in a gap of several inches along the turns. In these areas the Diamond Surface, Inc. team used a close proximity grinder built by the company.

“It’s a hydraulically powered 2-foot curb-and-gutter grinder,” Stoltenberg explains. “The head is mounted off to the side, so it is able to grind at angles and hug road curves.” Use of this grinder achieved cuts within 1 inch of vertical surfaces.

Terry Kraemer, president of Diamond Surface Inc., notes that some of the bridges were also entrances to tunnels and the tunnels were narrower than the bridges. “This added another element of difficulty to the grinding process,” Kraemer says.

For each bridge, the grinding process took two days (including prep work). J.V. Bailey Co., Inc. then spent several weeks cleaning and staining the wood facings of the bridges as well as performing minor repairs on spalled areas of the bridge surfaces. One timber bridge spanning a drainage area was completely removed and replaced with a culvert system and one-lane road.

To maintain the historic flavor of the route, “even concrete used on the bridges is stamped with wood grain and painted brown,” Stoltenberg says. Bridge cleaning efforts entailed stripping and repainting these sections of concrete.

An unseasonably cold spring caused temperatures to remain too low to place the chip seal until June, but by June 13, this final surface had been applied on each of the four pigtail bridges. The road was then opened to traffic and remained open through mid-August to accommodate crowds associated with the annual motorcycle rally, Sturgis (sturgismotorcyclerally.com), one of the largest motorcycle rallies in the world. The fact that early repair work had remained on schedule allowed not only for unrestricted road travel during the tourist season, but permitted the DOT to move forward in the early fall with additional repairs and maintenance of associated roadways.

At the onset of the job, it was unknown whether the bridge decks could be ground according to the stringent specifications. But “the end result was one that all parties were pleased with and we learned that – with the proper amount of finesse and excellent operators – most anything can be ground,” Kraemer says.