On Friday, Dynapac introduced a new range of soil compaction machines at World of Asphalt with a transversely-mounted engine—a design move which makes almost all of the engine easily accessible to mechanics when the hood is lifted.

Dynapac says the sideways engine eliminates a problem common with the larger Tier IV Interim engines, which, traditionally mounted with the cooling package at the rear and the engine in front of that, can require mechanics to reach over wheels to get at the engine.

The new soil compactors range from 12 tons (CA 2500) to 15 tons (CA4000), feature an 84-inch drum and an Active Bounce Control system of feedback that provides basic stiffness feedback and “eliminate the chance of over compaction.”

Also introduced at the San Antonio show was Dynapac’s F100T tracked paver, also with a Tier IV Interim engine. The machine’s deck is raised three inches from the previous model but the hopper feed system remains “the lowest in the industry”, minimizing the drop distance of asphalt to the auger.

The paver also features the company’s external auger driver system with power coming from either end instead of the center. 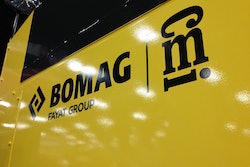 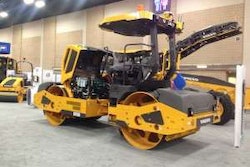 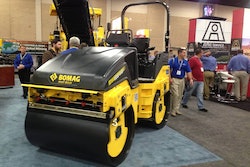