The $160 million U.S. Route 33 Nelsonville Bypass is a three-phase, 8.5-mile new construction of four-lane highway through Athens and Hocking County Ohio with a large portion bisecting Wayne National Forest, Ohio’s only National Forest. The new alignment consists of two major interchanges into the historic town of Nelsonville. The full length of the bypass will open September 2013. 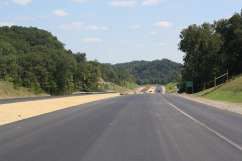 Currently, US Route 33 bottlenecks on both the east and west side of Nelsonville as it becomes two lanes through the city. The Nelsonville Bypass is the last piece in creating a limited-access corridor between Columbus, Ohio, and Charleston, W.V. Since the 1980’s, more than $330 million has been spent to upgrade the US 33 Corridor. Major Ohio cities along the US 33 Corridor include: Dublin, Columbus, Canal Winchester, Lancaster, Logan, Athens, and Pomeroy. Major Appalachian industries along US 33 include coal, lumber, utilities, transportation, construction, healthcare, tourism and manufacturing. US 33 is a major freight route as it connects the Ohio River ports located in Appalachia to the Columbus International Airport and the multimodal Rickenbacker International Cargo Airport. 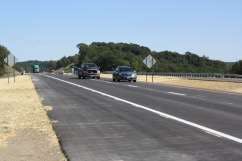 The contractors and the Ohio Department of Transportation (ODOT) worked closely with the Wayne National Forest to incorporate several elements to protect wildlife in the area, including high-mast lighting for bats, wildlife jump-outs for deer, a butterfly bridge, rattlesnake fencing, and tunnels for safe crossings by wildlife and humans. The project also included extensive grouting of nearly 500,000 cubic yards of abandoned underground mines.

Summary/Goal: Construct nearly a half mile of new four-lane highway while protect the natural environment and wildlife of Wayne National Forest as well as limit the impact to those living and traveling through Nelsonville. While Phase I was under construction District 10 was finalizing phase II and III. Phase I was the catalyst for receiving nearly $150 million of funding for Phase II and III. 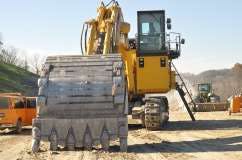 Summary/Goal: Construct 4.56 miles new four-lane highway including the west side interchange as well as the construction of four new bridges. The ultimate goal was to protect the natural environment and wildlife of Wayne National Forest. 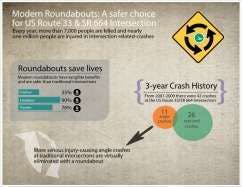 Summary/Goal: Phase III begins on the east side of Nelsonville and includes construction of 3.87 miles of four-lane highway. Also included in Phase III is the construction of the US 33/SR 78 /SR 691 interchange. The project will reroute SR 78 1.63 miles through the Happy Hollow area to form the interchange. The ultimate goal was to protect the natural environment and wildlife of Wayne National Forest. 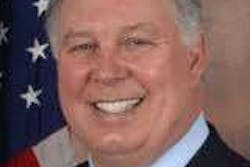 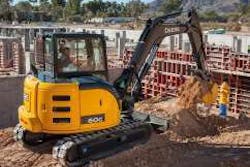 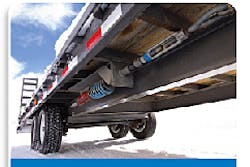 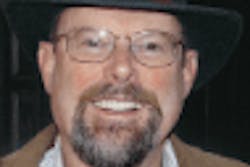