Here’s why a grading contractor prevails on a Nevada mechanic’s lien claim.

In a recent case involving mechanic’s liens – Byrd Underground LLC v. Angaur LLC, Aug. 7, 2014 – the Nevada Supreme Court held that grading and site work can establish the commencement of construction, and hence, the priority of a mechanic’s lien.

Mechanic’s liens are creatures of statute in all 50 states. They are designed to assist in ensuring payment for work or materials provided for construction or improvements on land. Mechanic’s liens are typically given a higher priority than most other real property security interests. The priority of competing security interests is important because it determines which claims will have the first right to funds from a foreclosure sale. The priority of a mechanic’s lien is determined either by the time the lien attaches to the title or by the point in time to which it “relates back.” With some exceptions, the lien attaches or relates back prior to the time that any notice appears in the public records. In many states, such as Nevada, mechanic’s liens relate back to when the first visible construction commences on the property.

In Byrd Underground, Angaur, LLC, and Balaji Properties Investment, LLC (collectively, the owners) jointly purchased a parcel of unimproved land in Las Vegas. In spring and summer 2006, two different parties placed, and allegedly spread, between 200 and 300 truckloads of dirt/material on the property. Both parties were performing work on unrelated construction projects on neighboring parcels and roadways. The degree to which the subject property was covered and subsequently spread or graded is not clear.

Meanwhile, the owners obtained bids from general contractors to construct a strip mall on the property. Atlas Construction Ltd. was selected as the general contractor. On Nov. 2, 2006, Byrd dug four to six holes on the property with a backhoe to determine how much dirt/material had been brought onto the subject property in order to submit a bid to Atlas. On Nov. 8, 2006, the owners contracted with Atlas.

On Nov. 28, 2006, a title company conducted a site inspection of the property and concluded the land was vacant and that there was no evidence of a recent work of improvement. Thereafter, the owners borrowed funds from PFF Bank & Trust for the purpose of constructing a strip mall on the property. On Nov. 29, 2006, a deed of trust for the construction loan was recorded with the Clark County Recorder. Byrd had not performed any work on the subject property prior to Nov. 29, 2006, other than digging the test holes and submitting a bid.

Subsequently, a dust control permit and building permit were issued for the subject property. During construction, Atlas used and incorporated at least a portion of the dirt/materials into the project. In 2007, Atlas and Byrd executed three written subcontracts for wet utilities, dry utilities, and grading. Byrd and another subcontractor, Wells Cargo, Inc., provided services for the project but were not paid. As a result, Byrd and Wells Cargo (collectively, lien claimants) commenced mechanic’s lien actions in state court and obtained judgments against Angaur, Balaji, and Atlas.

After the construction project was completed, the owners filed for bankruptcy. Both owners’ schedules of creditors holding secured claims included a “[f]irst [m]ortgage” to U.S. Bank, and both lien claimants’ judgment liens. The owners and U.S. Bank entered into a forbearance agreement and created a disclosure statement and plan of reorganization with the bankruptcy court. The lien claimants objected to the owners’ disclosure statement and plan of reorganization, and filed a complaint with the bankruptcy court to determine the priority of liens. The bankruptcy court requested the Nevada Supreme Court clarify several questions of law relating to the priority of the mechanic’s liens under Nevada law, including the visible commencement of construction test relating to grading work.

In addition, the court concluded that grading can be an integral part of the “entire structure or scheme of improvement as a whole” and part of the actual onsite construction. If it is, grading may be adequate to establish commencement of construction as long as it is visible from a reasonable inspection of the site so that lenders are provided notice that lienable work has commenced. The court further ruled that although the dates of contracts and permits are not relevant with respect to the visible commencement of construction test, they might assist in determining the scope of the work of improvement. Thus, if a contract excludes certain work, then that work might not be part of the “work of improvement.”

The Byrd Underground matter underscores the importance of understanding mechanic’s lien rights in the jurisdiction where work is being performed. Mechanic’s liens are creatures of statute, technical in nature, and unforgiving if deadlines or procedural requirements are not met. When properly utilized, they are a powerful sword in a contractor’s arsenal to enforce its right to payment. Here, Byrd’s claim was allowed to proceed based on Nevada’s visible commencement of construction test. In a different jurisdiction, however, Byrd might have found itself out of luck.

Attorney Brian Morrow is a partner in Newmeyer & Dillion LLP and a licensed civil engineer specializing in construction law, including road and heavy construction. brian.morrow@ndlf.com 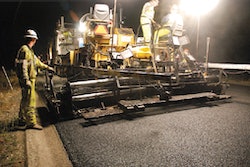 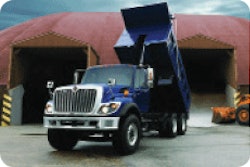 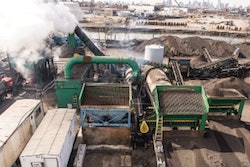