My family and friends often tease me about my driving. Some say I drive too fast, and I’ve been known to hit a curb or two. I wasn’t the best at parallel parking (that is until I moved to Chicago after college, but I can now hold my own). Others tease me because back in a high school, a deer jumped into the side of my car. (Yes, it’s true. I didn’t hit the deer. It rammed into the side of my car, left a big dent and then ran away.) Some just tease me because I don’t have the greatest sense of direction, and it can come out in my driving – i.e. finding lots of places to turn around. (Thank goodness now for GPS!) 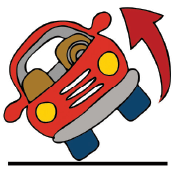 The teen driver was making a right turn at a stop sign but did not straighten out the wheel after the turn, according to the report. This caused the car to slowly approach a nearby tree, and the right front tire rode up the tree before the car flipped over. A police officer who responded to the accident noted in the GMA report that the passenger in the teen’s car said the incident was like slow motion because they rolled up to a tree, stopped for a second because they were not traveling at a high speed and then the car just rolled over. I can say for certain that I’ve never driven up the side of a tree. BetterRoads.com/teen-flips-car-in-first-50-feet-of-first-driving-lesson 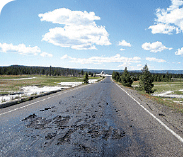 A 3.3-mile loop drive in Yellowstone National Park is temporarily closed after the park’s thermal geology began melting the asphalt, according to the National Park Service (NPS) (nps.gov/index.htm).

According to reports from the Associated Press, potholes and other damage to roads and walkways is not uncommon on the park. But, the damage to Firehole Lake Drive is more severe than usual and could take several days to repair. According to the AP report, unusually warm weather could be partially to blame for the high underground temperatures in the area. BetterRoads.com/yellowstone-heat-melts-roadway