The future begins today: Technology that will revolutionize trucking is already here 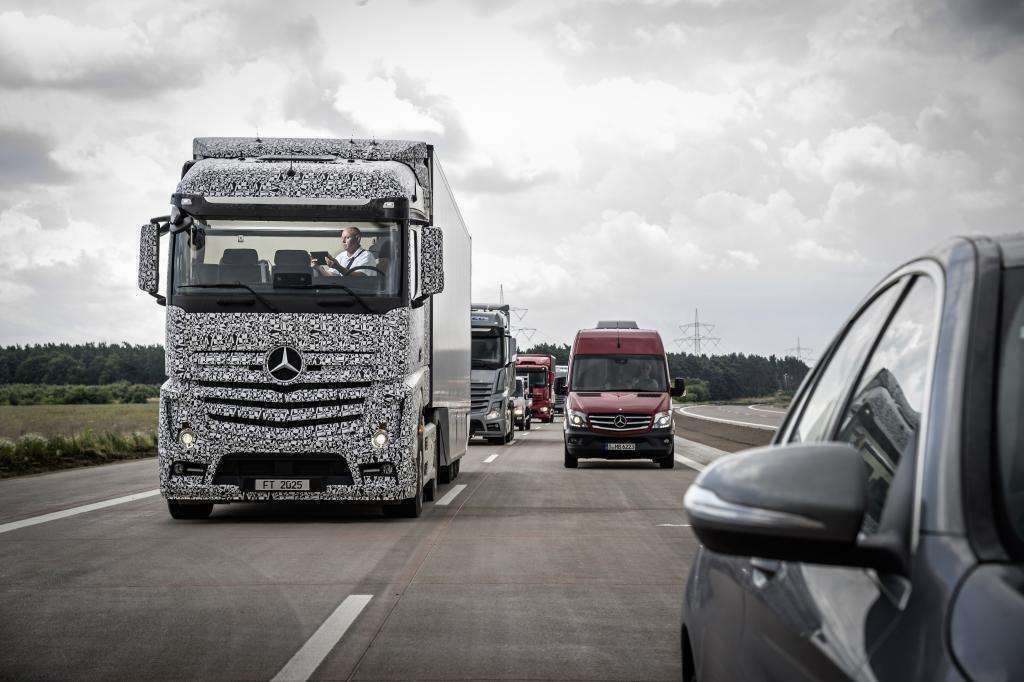 Technology unveiled in Europe in recent weeks — like Daimler’s self-driving tractor-trailer, pictured here — will revolutionize trucking in the U.S. and globally in the coming years.

It’s a cold, rainy morning in Aachen, Germany. I’m on the tail end of a two-week jaunt through Europe that began with Daimler’s introduction of a self-driving truck and wrapped up Wednesday with ZF showcasing a host of innovative new products and technology. It’s been an informative trip, although I’m ready to feel the hot Alabama sun on my shoulders and eat a plate of ribs.

I’ve said it before: Europe is the center of automotive and truck design today. This trip, along with an earlier visit to Meritor in May, have only affirmed that. And that means, like it or not, changes — and big ones — are coming to the North American trucking industry.

We’ve now reached the payoff point with the explosion of computing technology that began in the 1990s. The Internet, GPS, smartphones, virtual reality, social media, miniature electronic control modules, instantaneous data transfers and processors are now combining to introduce technology that will fundamentally change the way trucks and fleets operate.

The first hints of this coming technological transformation are plain to see here in Europe. Meritor’s innovative “intelligent axle” is Exhibit A. Daimler’s Autonomous Truck is Exhibit B. And then there’s ZF: its new Traxon AMT and Smart Truck Maneuvering system stole the show this week. But the company also introduced a host of intelligent chassis and ride control systems that use electronic sensors to actively smooth ride quality and enhance steering response no matter the weather or road conditions.

And these aren’t just cases where engineers are designing these systems simply because they can. In each case, this technology is being actively pursued and invested in to solve specific problems. Moreover, if you’re a truck OEM or top tier component supplier, you simply can’t afford to sit on the sidelines in this Technological Arms Race. There’s too much at stake. So make no mistake: This technology and the changes they will bring with them are coming, to one degree or another.

Do I think that in 10 years truck drivers will be obsolete and rolling robots will be hauling our goods from state to state? No.

Do I think that in certain cities 10 years from now a truck driver stuck in heavy traffic will be able to turn control of the truck over to an onboard computer and rest while the vehicle drives itself through the congestion? Absolutely.

Do I think that if you’re wondering where your Amazon package is you’ll be able to turn on your computer and see exactly where in the world it is at the given moment? No question.

Do I think a driver faced with a tight and hazardous backing situation will be able to climb down from the cab, walk to the back of the truck and use his tablet computer or smartphone to precisely and safely guide the trailer to exactly where he wants it? Without a doubt.

Do I think that fleets struggling to find drivers will embrace technology that will allow a driver in a lead truck to steer an electronically controlled convoy of two or three vehicles across country with no drivers in the trailing vehicles? Yes.

Do I think the driver in that lead truck will be a highly trained, highly paid and highly valued transportation specialist? Without question.

All that said, let me offer a few final Euro-Technology thoughts before I wander out in the rain to find a good German beer and some weinerschnitzel:

1. I firmly believe Volkswagen is coming — via acquisition — to the North American truck market. There is no way the suits in Mannheim are looking on at the advances being made by Volvo, Daimler, ZF, Meritor and a whole host of their continental competitors and thinking, “Nein! We don’t want to sell our trucks and technology in the United States!” VW wants in. The only question is how they’ll decide to enter.

2. You may long for simpler trucks and engines that could be torn down and rebuilt under a shade tree. But the trend lines are clear: Vehicles are getting more complex. Which means that our industry — on both the fleet side and OEM side — has got to start proactively dealing with a technician shortage that is only going to get worse as these technology enters production and becomes commonplace.

3. That said, it may be time to start considering establishing a new type of technician: A Vehicle Software Technician, for lack of a better term. But as trucks transform into computer-controlled rolling robots, we’re going to need specialists who can analyze, troubleshoot and repair the myriad of onboard electronics that are essential for uptime. In any event, it seems likely to that as vehicles grow more complex, it may make sense to establish specialty tracks for technicians: The concept of a guy working on an engine one minute, putting brake shoes on the next and installing a fifth wheel after that may be archaic and hurting shop productivity.

4. Don’t panic! Change is coming. But it’s not going to hit all at once. There will be headaches. But there will also be concrete advantages. But guys who deal with the learning curve, understand and embrace these new systems are going to be a hell of a lot more valuable to fleets in the near future than guys who don’t.

5. Finally, keep in mind that there’s money to be made in all this. Lots of money. And the fleets that figure out how to leverage all this new technology to their benefit will be the ones making it.

Editor’s Note: This article was written by Jack Roberts. He is the executive editor for CCJ and equipment editor for its sister magazine Overdrive.
Read Next