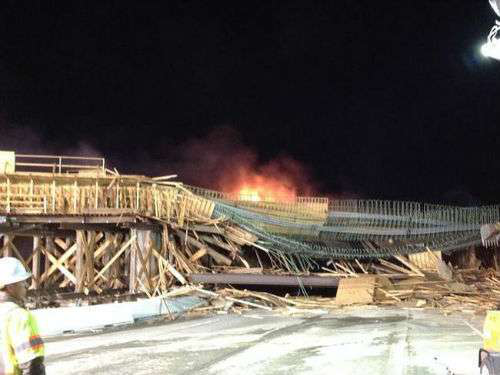 The construction site of a $31.7 million bridge in California caught fire Monday, ultimately resulting in the bridge’s collapse, Sourceable reports.

A report from the New York Daily News notes that a worker accidentally started the blaze with a welder’s torch, igniting the Ranchero Road overpass bridge’s wooden supports.

With wind gusts up to 35 mph, stopping the blaze required the work of 60 firefighters, according to a report from NBC Los Angeles.

The report adds that the fire shut down both directions of the Southern California 15 Freeway.

The bridge was part of a $59 million interchange project, Sourceable reports.

The Daily News reports that bridge construction began in early 2013. Caltrans spokesperson Terri Kasinga called the bridge collapse “a major, major loss,” adding that workers will now have to rebuild everything other than the ramps.