Geosynthetics of all types speed construction 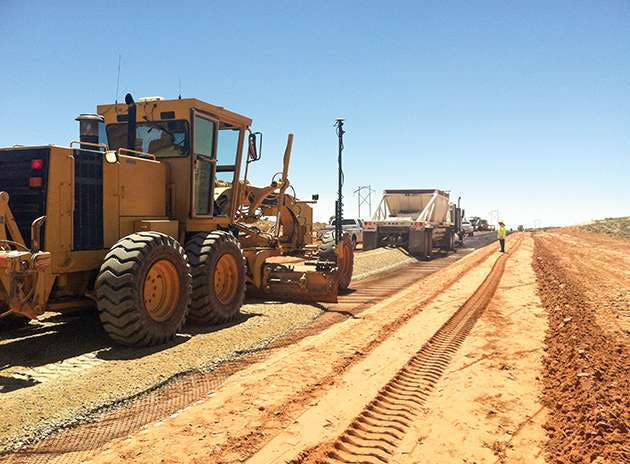 On Arizona’s U.S. 89T emergency bypass construction in 2013, aggregate base is spread over triaxial geogrid above a graded base. The use of geogrid cut one-third of the cost of the aggregate base.

Geosynthetics comprise a family of value-added products that allows bridges, highways and roads to be built faster, cheaper and to last longer.

Some geosynthetics enhance pavement longevity by separating good materials from bad, while others promote water flow from pavement structures as they facilitate drainage.

While most geosynthetics are planar or sheet-like in format, 3D geogrids add structural strength to a road section, permitting reduced depths of aggregate bases and bituminous lifts.

ASTM (2006) D 4439 defines a geosynthetic as a “planar product manufactured from a polymeric material used with soil, rock, earth or other geotechnical-related material as an integral part of a civil engineering project, structure or system.”

“Geosynthetics are man-made polymeric materials used for geotechnical application,” says the California Department of Transportation (Caltrans) in its Caltrans Geotechnical Manual. “They are used in lieu of conventional materials and often are more cost effective with equal or improved engineering performance.”

“Geosynthetics are materials that are incorporated into layers of rock or soil that can provide stabilization as well as separation of good material from lesser material,” says Aaron Schlessinger, E.I.T., southwest region manager for Tensar International Corp. “Still, others enhance drainage.”

There are four different types of geosynthetics:

• Geotextiles are either woven or nonwoven and used in civil engineering projects. Their mission is to prevent soils from migrating into drainage aggregate bases or pipes, while maintaining water flow through the system. They are used for filtration, drainage, separation, reinforcement and as a fluid barrier. A subset of geotextiles is paving fabrics used between pavement lifts.

• Geogrids are formed by a network of tensile elements with openings of sufficient size to allow interlock with the surrounding fill materials. They provide reinforcement or stabilization, with geogrids oriented such that their principal strength is in one direction (uniaxial), both directions (biaxial geogrids) or in three directions (triaxial).

• Geocomposites are a combination of two or more geosynthetic materials, such as geotextiles with a core, and are used to enhance drainage, for example as prefabricated longitudinal edge drains or a layer feeding those drains.

• Geomembranes are a single, solid sheet of polymeric material, used in construction as an impermeable barrier.

Use of a geosynthetic for separation prevents intermixing between two adjacent dissimilar materials, so the integrity of materials on both sides of the geosynthetic remains intact, according to Caltrans. This keeps weak subgrade soils from pumping through overlying fill or prevents contamination of select fill by intrusion into the subgrade. “This may allow stable construction over soils that may otherwise require expensive ground improvement technologies,” Caltrans says.

Geosynthetics can add value to the construction sequence by saving material costs associated with working surfaces, expediting construction schedules and providing a permanent working surface that yields a smooth riding surface, Tensar says. Their added cost, though, must be balanced by savings in material and labor, along with long-term benefits in increased pavement durability. Finding the right combination is the challenge of the civil engineer.

Whether woven or nonwoven, the “planar” geotextile (vs. 2D or 3D geogrid) must allow migration of water while keeping dissimilar materials apart. They perform according to their apparent opening size (AOS), which must be smaller than the smallest size particle to be retained, and still allow for the flow of water through the geotextile material.

Geotextiles (woven and nonwoven) are used as separators and filters to prevent soils from migrating into drainage aggregate, granular bases or pipes, while maintaining water flow through the system, according to the Iowa DOT.

Even as separators, nonwoven needle-punched geotextiles and geocomposites provide drainage by allowing water to drain from or through low-permeability soils.

Geosynthetics are used within asphalt pavement structures as well as below them. “Geosynthetic pavement interlayers [also called paving fabrics] provide numerous benefits to a pavement system,” say Bradley J. Putman and William P. Bolger, Clemson University, in their 2014 Transportation Research Board paper, Laboratory Investigation of the Effect of Compaction Temperature on Geosynthetic Pavement Interlayers Made with Warm Mix Asphalt Overlays. 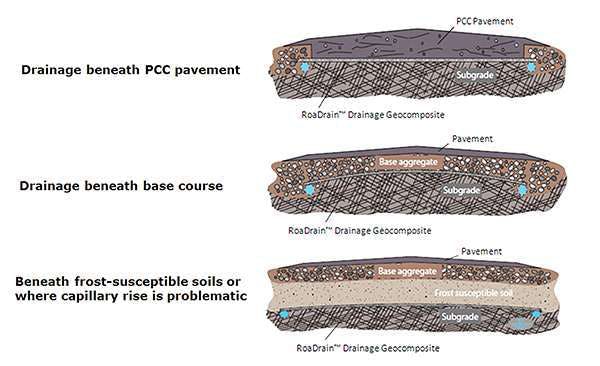 Geocomposites promote drainage in pavement structures, from moisture moving both upward and downward in a base; here, geocomposite layers connect to longitudinal side drains to expedite discharge.

When used properly, these interlayers can prevent water from infiltrating a roadway base and also assist in absorbing pavement stresses, which then extends the life of a pavement. “Geosynthetic pavement interlayers lead to an increase in the performance of a pavement overlay by retarding fatigue and reflective cracking,” Putman and Bolger say.

Typically, the most common geosynthetic interlayer system consists of the existing base pavement, tack coat, nonwoven geotextile paving fabric and an asphalt overlay.

One of the most important factors affecting the performance of geosynthetic interlayers is the bond that is established between the old pavement and the new overlay, they say.

“This interfacial bond is directly affected by the type and amount of tack coat,” Putnam and Bolger write. “Paving fabric interlayer systems are typically constructed beneath hot-mix-asphalt overlays having a minimum thickness of 1-1/2 inch to ensure enough heat to draw the asphalt tack coat up into the paving fabric.”

It’s generally recommended the overlay temperature does not exceed 325 degrees Fahrenheit to prevent thermal damage to the paving fabric, the authors say, adding it’s also recommended the overlay temperature is not below 250 degrees Fahrenheit because lower temperatures may not generate sufficient heat to warm up the tack coat enough to saturate the overlying paving fabric to create a well-bonded interlayer that will be a moisture barrier and provide stress-absorbing benefits.

In view of the increasing use of warm-mix asphalt, which may not reach those temperatures, Putnam and Bolger evaluated the feasibility of using paving fabric interlayers with the lower compaction temperatures encountered with WMA overlays. Using Petromat 4598, they studied paving fabric interlayers made with four different tack coat binder grades and asphalt overlays ranging from 200 to 300 degrees Fahrenheit using a melt-through test and an interlayer shear strength test to determine the minimum WMA overlay compaction temperature to ensure the interlayer system will perform properly.

“The results indicated that the saturation of the paving fabric in an interlayer system is dependent on multiple factors: temperature of the overlay, compaction effort used to compact the overlay and the grade of binder used for the tack coat,” they conclude. “It’s recommended that the compaction temperature of an asphalt overlay be limited to a minimum of 250 degrees Fahrenheit when using conventional interlayer construction practices.”

While planar or sheet-like geotextiles provide separation between pavement layers, 2D and 3D geogrids provide stabilization in addition to separation.

Their benefits are such that they not only physically reinforce a weak subgrade, but also can allow reduction in asphalt and aggregate layers above, saving time and money. 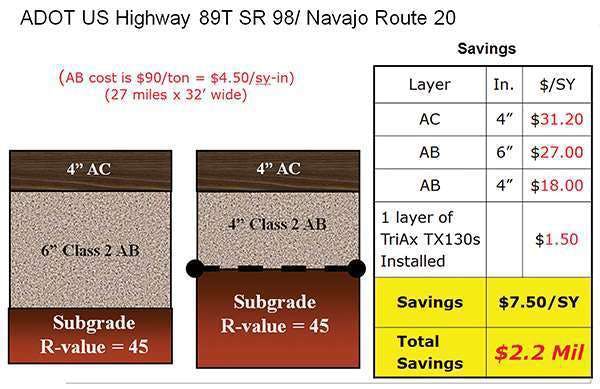 The value of adding value: In urgent construction of the U.S. 89T emergency bypass in summer 2013, use of geogrid cut 2 of 6 inches of aggregate base (AB) from the project, saving $2.2 million in material costs while speeding construction.

“Geogrids stabilize subgrades, providing a construction platform over a soft subgrade,” Tensar’s Schlessinger says. “But they also facilate design optimization of pavement sections, where the thicknesses of the structural layers of a pavement section may be minimized, particularly over competent subgrades… Both asphalt and aggregate base layers may be reduced in depth by stabilizing them with a geogrid. Because the geogrid stabilizes the sections, less material is required to achieve a certain performance criteria.”

The resulting mechanically stabilized layer is a composite layer of a defined thickness made up of unbound granular materials combined with one or more layers of geogrid. “The combination of the two materials creates an enhanced composite layer that has improved pavement properties and performance,” Caltrans says.

Geogrids may be biaxial or triaxial in design. A biaxial geogrid can be a punched-and-drawn polypropylene geogrid with rectangular or square apertures, resembling wire cloth with square openings. A triaxial geogrid has triangular apertures, which allow for greater stability, multi-directional stabilization and ultimately maximum performance efficiency.

“Biaxial geogrids are geosynthetic materials formed into a grid of integrally connected tensile elements,” says Caltrans in its October 2012 publication, Aggregate Base Enhancement with Biaxial Geogrids for Flexible Pavements. “[They have] apertures of sufficient size to allow ‘strike-through’ and interlocking with surrounding aggregate base materials. Biaxial geogrid increases the stiffness of unbound aggregate base layers and confines the aggregate particles under repetitive loading.”

This begs the question of which geogrid geometry works better in creating a mechanically stabilized layer below: biaxial (square) or triaxial (triangular) “holes.”

That use of a geogrid can save money was affirmed in a critical project in a remote area last summer.

In a fast-paced project last year in the north Arizona mountains east of the Grand Canyon, a geogrid helped cut a nine-month construction period to three months, while saving more than $2 million in aggregate base (AB) and trucking costs in the remote area.

In the early morning hours of Feb. 20, 2013, a landslide ripped through a section of U.S. 89 along a mountain slope about 25 miles south of Page, buckling more than 150 feet of the roadway and tearing the pavement up in 6-foot-high sections.

The damage forced the Arizona Department of Transportation (AZDOT) to immediately close a 23-mile-long stretch of U.S. 89 and begin work on a temporary detour (U.S. 89T), which follows the route of the existing Navajo N 20, a Navajo Nation road. By paving US 89T, the 115-mile detour route travel time was cut in nearly half and is similar in length to the closed U.S. 89 route.

The $35 million paving project to adopt N20 temporarily into the state highway system was finished only three months by FNF Construction, Tempe, an impressive feat considering the 44-mile-long tribal route was primarily a dirt road before work began in late May. “It was a high-intensity, short-duration project,” says Audra Merrick, Flagstaff district engineer at AZDOT.

Placed between the graded sub-base and the aggregate base, approximately 583,000 square yards of Tensar TriAx 130s geogrid saved time and money for the road project. An added structural benefit of the grid was a threefold increase the design life of the road.

“Six days a week, operations would start about 6 a.m. and go all day,” says Steve Monroe, senior resident engineer for AZDOT’s Flagstaff District. “At 6 p.m., a crew would come in and go to work; this went on 18 to 20 hours each day.”

The result was major savings, AZDOT’s Monroe says. “The geogrid is much less expensive and easier to put down than hauling all of that additional asphalt base,” Monroe says.

For additional information on geosynthetics, visit betterroads.com/down-to-earth for a web extra on “Geocomposites for Drainage.” 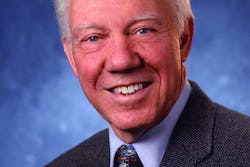 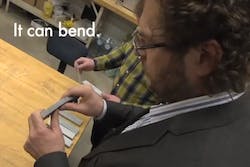 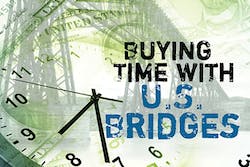