President Obama briefly addresses transportation in State of the Union 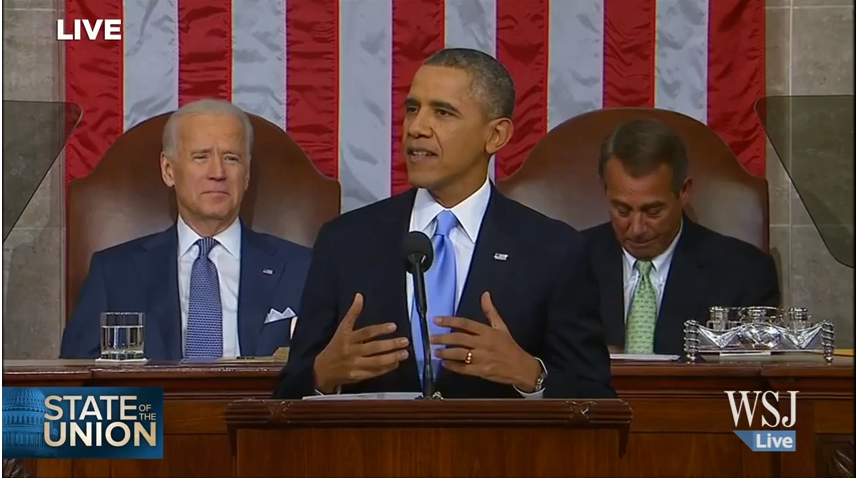 Tuesday night, President Obama gave his State of the Union address, which offered a chance for the president to present potential solutions for transportation and infrastructure funding.

However, our sister site Overdrive points out that the president only briefly mentioned transportation in his speech.

Instead bringing focus to nation’s deteriorating transportation system, Obama mentioned infrastructure funding and natural gas as part of his push for tax reform and job creation.

Obama said he wants to see natural gas become a primary fuel source and revenue from potential tax reform used in infrastructure and highway funding. He added that he plans to take steps to “slash bureaucracy and streamline permitting” for major transportation projects.

“We can take the money we save from this transition to tax reform to create jobs rebuilding our roads, upgrading our ports, unclogging our commutes — because in today’s global economy, first-class jobs gravitate to first-class infrastructure,” Obama said. “We’ll need Congress to protect more than 3 million jobs by finishing transportation and waterways bills this summer. That can happen.”

“I’ll cut red tape to help states get those factories built and put folks to work, and this Congress can help by putting people to work building fueling stations that shift more cars and trucks from foreign oil to American natural gas,” Obama said.

“Time is of the essence,” Ruane said in a written statement. “ The federal Highway Trust Fund—the source of 52 percent of all state highway and bridge capital investments—will be unable to support any new improvements in fiscal year 2015, unless the President and Congress act this fall.  U.S. Secretary of Transportation Anthony Foxx put it best January 15 when he said ‘the Highway Trust Fund will start bouncing checks as soon as August.”

Ruane added that lawmakers and the president need to “fix the Highway Trust Fund as soon as possible.”

Rep. John Delaney (D-Md.), who authored a bill that would create a $50 billion infrastructure fund that can be leveraged to $750 billion, said the president’s speech addressed the nation’s “1960s infrastructure.”

“One of the missing pieces of the economic puzzle is infrastructure, which is why I’ve introduced bipartisan legislation that will finance up to $750 billion in new infrastructure projects without using appropriated funds,” Delaney said in a written statement. “There is strong bipartisan momentum behind this legislation in Congress and the President’s remarks underscore the possibility of finding an innovative solution that addresses both our tax code and our multi-trillion dollar infrastructure deficit.

“Rebuilding our nation’s roads and bridges will create millions of jobs in the short term and improve our competitiveness and long-term economic health for decades to come” Delaney added. “We can’t compete in a 21st century economy with a 1960s infrastructure.”

However, Jones also noted that lawmakers and the president need to find solutions for those transportation issues.

“While we respect the President’s willingness ‘to create jobs rebuilding our roads,’ we know that no one source of revenue can be sufficient to build, maintain, and reconstruct our nation’s bridges, tunnels, and highways,” Jones added. “Now is the time for Congress, the President, and other elected leaders to seriously consider all options to meet our country’s transportation funding needs. Tolling is one of the most powerful, effective, and proven tools in the funding toolbox.”

Tuesday night, after Obama delivered the State of the Union address, U.S. Transportation Secretary Anthony Foxx pointed to the importance of lawmakers developing a new surface transportation this summer.

“The road to better opportunities can take many forms – a bridge that helps parents get home faster, a transit system that connects a community to new jobs, or a port that helps businesses sell to more markets – and we at the Department of Transportation look forward to doing our part to help connect all Americans to the 21st century economy,” Foxx said in a written statement.

“I will be working throughout the year from the federal to the local level to build more infrastructure while growing jobs now and making more jobs possible with first-rate transportation networks. We will also build ladders of opportunity, connecting every American to the global economy,” he added. “I was especially glad to hear the President call on Congress to finish a much-needed transportation bill this summer, and the proposal to fund that bill through corporate tax reform can and should be done on a bipartisan basis.”