Manitowoc has launched the GMK6400 at Bauma 2010, and the company is touting it as the world’s most powerful six-axle all-terrain crane. The crane has a 400-ton maximum capacity.

“We’ve concentrated on all aspects of owning and operating cranes, particularly the issues our customers care about, including fuel efficiency, versatility, reach and productivity,” he said in a press statement. “Above all, we focused on strength. Customer feedback told us not to compromise the load chart for a few extra meters of boom. We followed that advice, and when customers see the charts, there are clear advantages over other cranes in this class. This crane is a new design and we believe it sets new standards in heavy lifting for six-axle all-terrain cranes.”

One prominent feature on the GMK6400 is the Mega Wing Lift capacity-enhancing attachment. It helps give the crane its superior lift duties by providing extra support to the boom. It also has a patented self-rigging system that mounts on the chassis and connects to the boom. When the boom is in the working position, Mega Wing Lift extends laterally to stiffen the boom, allowing it to lift greater loads.

With its Mega Wing Lift extended, the GMK6400 offers significant lift capabilities, which are up to 35 percent stronger than similar cranes, the company asserts. Strong load charts made customers demand the 400 t rating. The Mega Wing Lift weighs approximately 10 t and can be transported on a single trailer. Its transport height is approximately 2.5 m.

There are additional innovations, especially in travel. The GMK6400 has a hybrid drive system for travel at lower speeds and is the only crane in this capacity class with this feature. This system, called MegaDrive, is lighter than typical drive systems. It allowed Manitowoc engineers to make other components in the crane more robust while maintaining the same vehicle weight.

MegaDrive also gives better traction on poor surfaces for easier on-site maneuver, especially when combined with Grove’s Megatrak independent suspension system. In also gives the crane more efficient fuel consumption, a lower center of gravity and longer lasting parts. MegaDrive powers the crane when it is accelerating to speeds of approximately 20 km/h, and then conventional drive takes over. MegaDrive activates when decelerating below a similar speed and provides smooth acceleration from standstill and automatic retardation at slower speeds.

Hollingshead said the crane has only one engine, reducing weight and providing better fuel economy.

“Our engineers discovered that smaller engines, which are typically used to power lift operations in the superstructure, use more fuel when they operate at the higher RPM needed for actions like slewing, telescoping and luffing,” he said. “Using a larger, single engine operating at lower RPM, as featured on the GMK6400, is actually more fuel efficient.”

The GMK6400 has a Mercedes OM 502 Tier 4i (Euromot IIIB) eight-cylinder engine that produces 405 kW at 1,800 rpm, powering a ZF AS Tronic 12 transmission. For when the crane is idling, Manitowoc has included an auxiliary power pack to most efficiently run functions such as electrics, the heater or air conditioning.

Main boom on the new crane is 60 meters, and it has the latest design of Grove’s Megaform shaping with a more rounded top half, again for better strength to weight ratios. Luffing jib length will be approximately 79 meters. Like the GMK6300L (the other new six-axle Grove mobile crane), the GMK6400 has the new carrier cab. Steer-by-wire in the carrier provides better control and space utilization.

Grove’s ECOS control system and EKS 5 load monitoring program are included as standard, and the operator’s cab can tilt to 20 degrees. Maximum line pull is 125 kN, and 380 meters of 24 mm wire rope is provided on the main drum. Five outrigger positions are available to give operators maximum flexibility when positioning the crane on site. 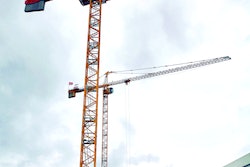 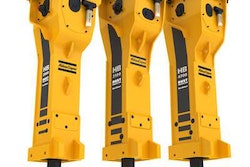