Editor’s Note: This is Part Four of an eight-part series on the evolution of construction equipment and the diesel fuel alternatives manufacturers are introducing, including hybrid machines, electric and battery-powered equipment, and hydrogen combustion and hydrogen fuel cell technology. You can read Part One in the series by clicking here. Part Two. Part Three.

While there are many technologies available or under development today that can reduce the carbon dioxide output of heavy equipment, nothing comes closer to net zero than hydrogen. By all accounts, it will be the fuel of the future, even if it isn’t widely adopted until close to mid-century.

Understand, however, that there are two different hydrogen propulsion technologies emerging with two very different timelines:

With either technology, once you have the hydrogen in your machine or vehicle, the resulting “emissions” are negligible, with no carbon dioxide and only a small amount of water vapor.

The many colors of hydrogen

The kicker is the fact that making hydrogen gas is not a net-zero proposition. The most common method of making hydrogen today is natural gas reforming, which uses methane as the base stock. This is the least expensive method for making hydrogen and comprises 96% of the hydrogen market, most of which is consumed by the agriculture and semiconductor industries.

Green hydrogen is the holy grail to which environmentalists aspire. It uses electrolysis to separate the hydrogen from oxygen in water. This process shows promise, especially when solar or wind power can produce electricity cheaply and without fossil fuel. Nuclear power could also provide the electricity to create hydrogen but nuclear faces headwinds from opponents in this country and Europe.

JCB has long been bullish on the merits of hydrogen-powered equipment, exploring both hydrogen combustion and hydrogen fuel cells. “We studied a host of different fuels, and in all of it, we kept coming back to hydrogen,” says Tim Burnhope, chief innovation and growth officer.

One reason is that battery-powered machines (of which JCB has seven) were practical in urban areas where operations are never too far from charging infrastructure. But when it came to quarries and sites remote from the electrical grid, contractors were going to need something else.

The company’s first proof of concept experiment used hydrogen fuel cells to power the JCB 220X excavator. This machine debuted in May 2020 and spent 12 months undergoing testing and evaluation at a quarry site. That led to some interesting conclusions.

“Fuel cells are a bit lazy when it comes to transient response,” says Burnhope. They need sophisticated electronics to manage the power supply between the fuel cell and the battery. They also require de-ionized water and high-capacity cooling, and can be sensitive to dust and vibration,” he adds. The end result, in JCB’s opinion, was that fuel cells were too complicated and expensive for the off-highway market for now.

Perhaps the first commercially available hydrogen fuel cell piece of equipment, Generac’s EODev GEH2 generators, will be distributed by United Rentals beginning in Q2 2022.  The static nature of generators mitigates many of the vibration, contamination and other issues that challenge off-road equipment applications.

While much of the hydrogen fuel cell technology is still in testing, hydrogen combustion engines offer nearly identical environmental benefits and are much closer to commercial viability and less expensive to produce. Hydrogen combustion engines retain the basic architecture of a diesel engine—cylinders, camshaft, block and crankshaft—with a top end that uses spark ignition and fuel injection.

“We came up with a brand-new combustion process that works at much lower pressures and temperatures, and gives incredibly clean combustion,” says Burnhope. “We’ve got fantastic turbochargers today that give us a huge amount of air. Hydrogen already has a lot of energy, and we can maximize the air while minimizing the hydrogen in the cylinders.”

“Everything below the cylinder head apart from the pistons is the same as our diesel engines, says Burnhope. “So, we can use 70 percent of our existing parts and 70 percent of the existing supply chain.”

Bridge to the future

Jeremy Carson, off-highway director for Cummins, sees hydrogen combustion as a practical transition for diesel. Cummins, he says, is pursuing a spark-ignited “fuel agnostic” platform that will include hydrogen, natural gas, methane and other biofuels.

“We think it’s a good medium-term solution where you can have some scale with diesel,” says Carson. “It’s going to let OEMs ease into this and build out hydrogen infrastructure for the long term.”

The big challenge both types of hydrogen engines face is the slow development of hydrogen fueling infrastructure. Outside of industrial channels, the fuel is not widely available.

OEMs will also have to figure out where to put hydrogen storage tanks on their machines, as it is bulkier than liquid fuel. Wheel loaders, for example, don’t have much room to spare, but excavators and machines with large counterweights should have enough, says Burnhope. For stationary engines such as generators, gantry cranes and light towers, onboard fuel storage won’t be a problem.

Burnhope points out that refueling with hydrogen is much quicker than recharging battery-powered models. Hydrogen just takes minutes to refuel while battery-powered machines can take two to eight hours to recharge.

The worst case scenario is that hydrogen combustion equipment may need to be refueled over the lunch hour or at the end of a shift, Burnhope says. And hydrogen gas can be transported to the jobsite, just like diesel fuel.

What excites engineers like Burnhope is just how pollution free hydrogen is compared to fossil fuels—and not just at the exhaust stack.

Proof of just how clean hydrogen combustion engines are, says Burnhope, can be seen on the dipstick. “Pull it after 100 hours and the engine oil is bright and clean. When you strip these engines down, they’re as clean as the day you put them together,” he says. 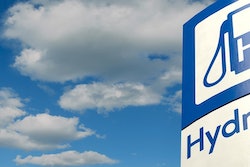